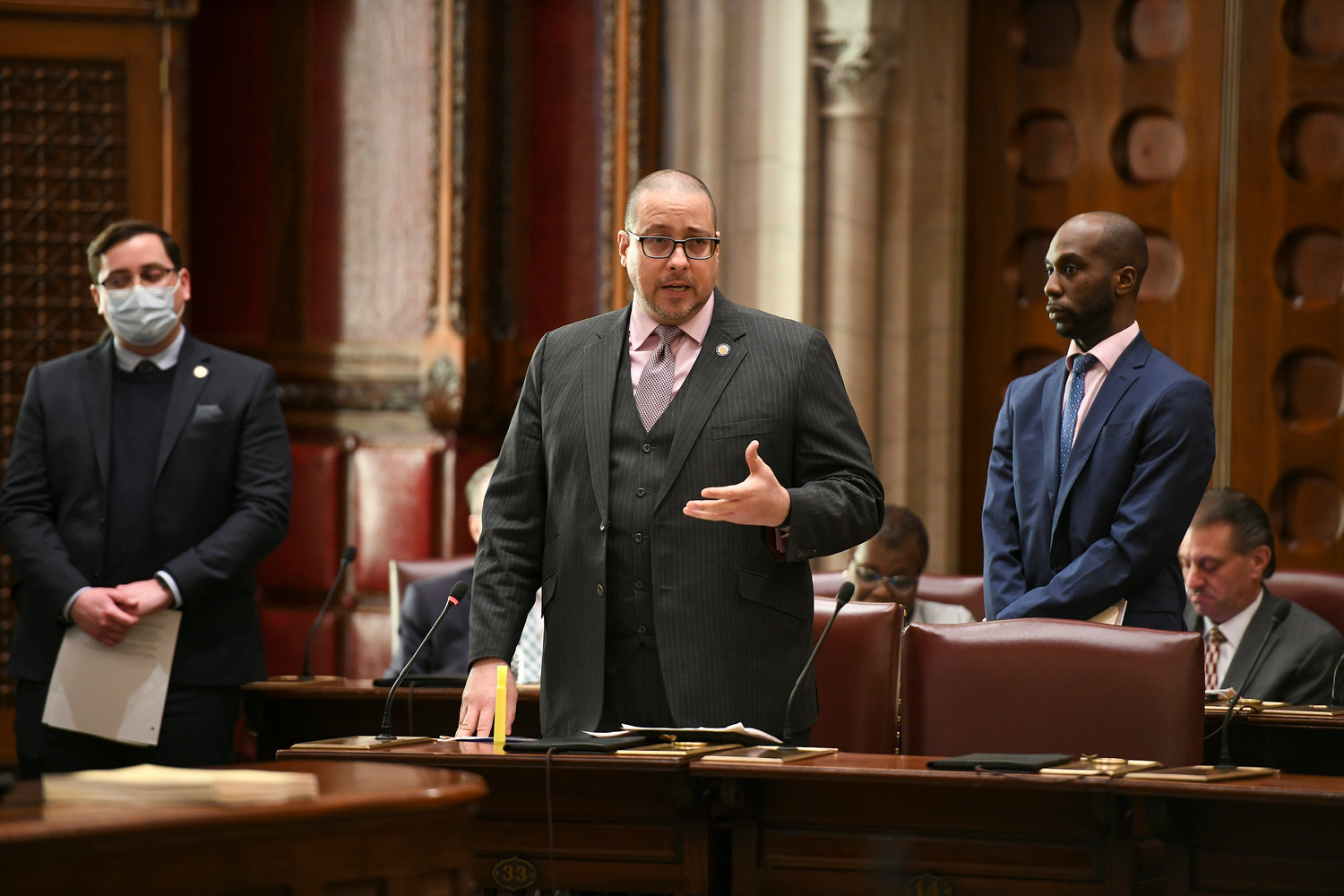 NYS Senator Gustavo Rivera speaks on the 2022 Budget Resolution at NYS Senate Chamber in Albany. Despite being an incumbent, Rivera did not get the endorsement of the Bronx Democratic Party.
Courtesy of NYS Senate Media Services 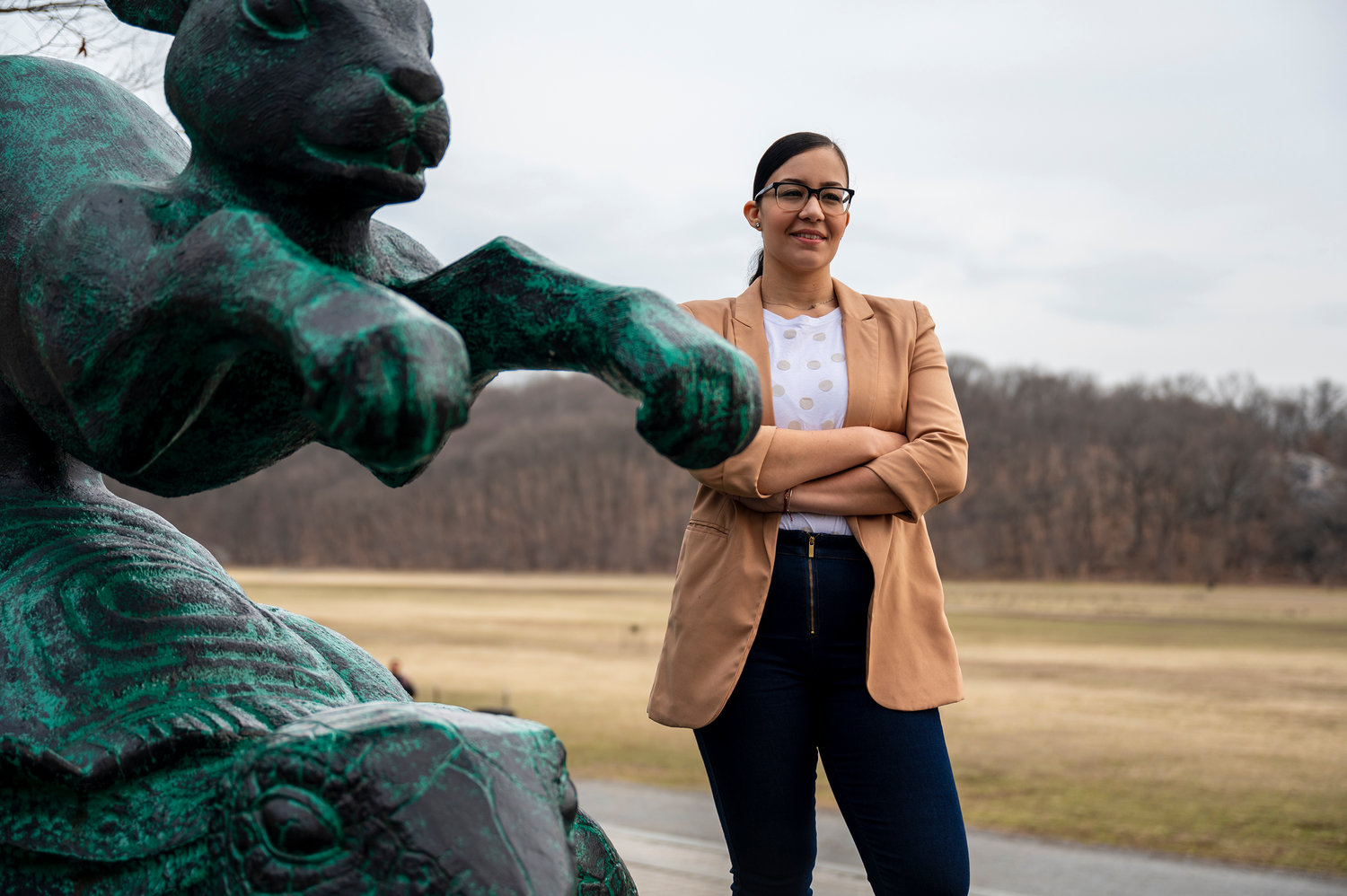 Miguelina Camilo stands for a portrait near the Tortoise & Hare sculpture at Van Cortlandt Park earlier this year. She got the Bronx Democratic Party's endorsement in the senate's newly drawn 33rd district.
Hiram Alejandro Durán
Previous Next
By Sachi McClendon

State Sen. Gustavo Rivera is still not getting an endorsement from the Bronx Democratic Party in his bid to hold onto his seat in the newly drawn 33rd district. Instead, the county organization is backing his challenger, political newcomer Miguelina Camilo.

Camilo launched her campaign in February for the open seat of the former 36th district with the county party endorsement. Since then, the state’s senate lines were redrawn, and Camilo entered the new 33rd district race. So too did Rivera.

And after the lines had shifted, Rivera said he asked the party to reconsider its endorsement, but was turned down. “It’s disappointing because ultimately it’s kind of clear — and on paper — that they’re making the choice to support Ms. Camilo,” Rivera said.

Even remaining neutral in the race was a non-option. “I was told that that was an impossibility,” he said.

Sen. Jamaal Bailey, chair of the Bronx Democrats, said that the organization was forced to make a tough decision after the special master significantly reworked the borough’s state senate districts. “I had multiple conversations with Sen. Rivera and other people trying to put the pieces of the puzzle together so that we would be able to figure out a way where something unfortunate as this could be avoided,” Bailey said.

Ultimately though, the party didn’t want this endorsement — or future endorsements for that matter — to be viewed as conditional. “We committed to her. We gave her our word as an organization,” he said. “A commitment was made to Ms. Camilo and shifting back to neutrality is akin to taking your word back.”

Before she entered the race, Camilo quit her position as an associate counsel at the city’s Board of Elections office to avoid any conflict of interest. “She’s committed to running,” Bailey said. “She had separated from her employment. She owns property in the district.”

“As a party chair, as someone who is looking to continue to promote and uphold women, it’s very difficult for me to say, all of a sudden, you should just stop your journey. You should stop seeking to run for office.”

Camilo has strong ties to the county party, rising so far as a vice chair for the county committee.

“There’s obviously a connection that exists to the county organization and a level of loyalty that exists there,” Rivera said of the party’s support for Camilo. “I guess that trumps whatever work I’ve done in the last decade.”

Thanks to redistricting, Rivera’s residence no longer falls within the new 33rd district’s lines. His home now falls under the new 31st, represented by Sen. Robert Jackson, who Rivera said he wasn’t willing to run against.

“I thought about all my options, and one of the options was staying in the building, the apartment, that I’ve loved for all this damn time,” Rivera said. “But if I did that, I would have had to primary Robert Jackson. He’s a dude that I respect. And ironically, the reason I’m having this war over here now, is because I did not want a conflict within our conference.”

And about half of the old 33rd district population falls into the new one as well — according to data compiled by the online news outlet The City. “The newly-drawn 33rd senatorial district is the one that makes the most sense for me and my constituency,” Rivera said.

Soon after the maps were finalized, Bailey noted the party suggested Rivera run in the new 32nd or 34th district races, the latter of which is an open seat, as he will have to move to whichever district he may end up winning now.

“I have to be diplomatic and respectful to the wishes of an individual to do as they please,” Bailey said. “He made the decision based upon a combination of personal and professional (choices), I imagine. But there were options.”

Bailey stressed in an interview with The Riverdale Press that the party’s decision, made in collaboration with other county members, should not be seen as a move against Rivera. Rather, it’s a “continuing endorsement” of Camilo. “If the organization was going against Senator Rivera, there would have been a challenger in the primary configuration as previously constructed,” he said. “That was not the case.”

Rivera and Bailey said they have a good working relationship, however — a stark contrast to Rivera’s past associations with the former county chair Marcos Crespo.

“I’ve been doing my best to work with the current county organization, particularly considering the relationship I have with Jamaal, but they’re deciding to support her — not me — in this,” Rivera said. “That’s their choice.”