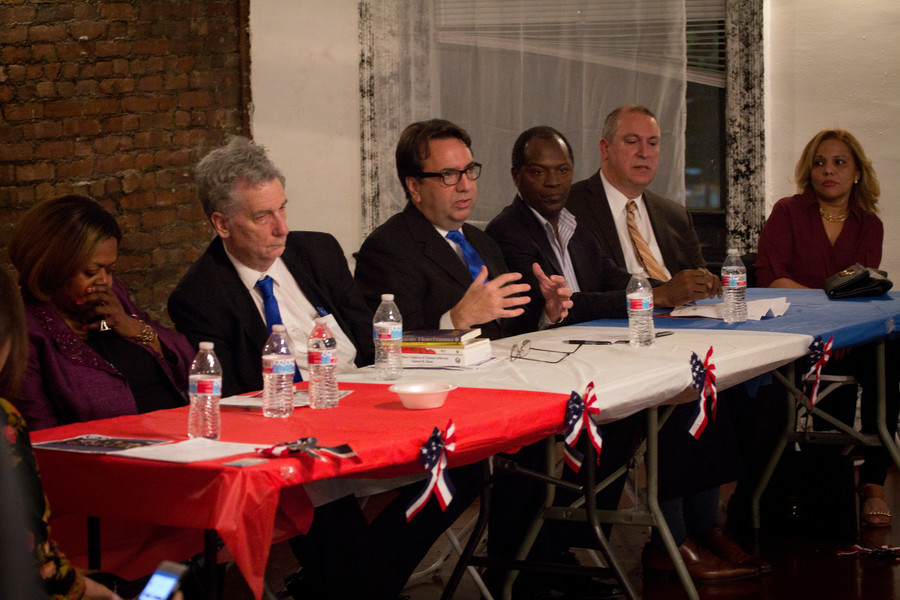 The leading candidate came late and left early, another slipped out during the intermission and two more crashed the party.

Congressional levels of decorum did not pervade the first debate over outgoing Rep. Charles Rangel’s seat in the Bronx last week.

Topics at the April 29 forum at a Fordham church, organized by the Bronx-based Bangladeshi American Council, centered on security for Muslims, housing and community outreach programs.

The candidates offered no disagreement during most of the evening. But on housing, underdogs Adam Clayton Powell IV and Clyde Williams took the opportunity to attack Assemblyman Keith Wright, who has earned the most endorsements in the contest.

“Rents have gone up more than 90 percent in central Harlem, more than 60 percent in the Bronx and more than 75 percent throughout New York City in a 10-year period,” said Mr. Williams, a former staffer for the Bill Clinton administration. “That is because of people like [Mr. Wright] and others who have failed to do their jobs, that are more concerned with taking money from special interest groups and worry about their own campaigns than your concerns.”

Mr. Wright conceded his donors have included landlords, but said that is not the full picture.

“I have a long history of putting landlords in jail. It makes no difference whether or not I take any money,” he said.

Mr. Wright had arrived about 20 minutes late and left more than a half hour before the other candidates did. During the intermission, state Sen. Adriano Espaillat, who has struggled to recreate the momentum he had in two previous congressional runs, departed.

Before the debate resumed, two newcomers joined Suzan Johnson Cook, Mike Gallagher, Mr. Powell and Mr. Wright at the table. Sam Sloan announced he was in fact seeking the Democratic presidential nomination and shared a rambling anecdote alleging that his daughter had been kidnapped. The monologue came in response to a question about public schools and did not receive any reply from the moderator or other candidates.

The other newcomer was Yohanny Caceres. She declined to answer any questions and alleged that an effort to kick her off the ballot was underway.

“I’m not prepared because I am being challenged right now to be knocked of the list as a candidate,” said Ms. Caceres, who did not share any biographical information. “I would like to challenge one of those guys up here to say it in front of my face who is the one that is going behind and why won’t you stand in front of me and say it?”

“I’ve got courage, I’ve got charisma, I’ve got cache — I have all the Cs — compassion,” she said.

Most of the candidates said they would open a constituent office in the Bronx if elected in the Tuesday, June 28 primary and the Tuesday, Nov. 8 general election. Like Ms. Caceres, Mr. Gallagher and Mr. Sloan did not answer questions on any topics, including outreach to the Bronx.

In spite of the evening’s irregularities, Aldo Perez of the Bangladeshi American Council said he wants to organize more debates.