Courtney Warley was MC mainstay before taking game to Portugal 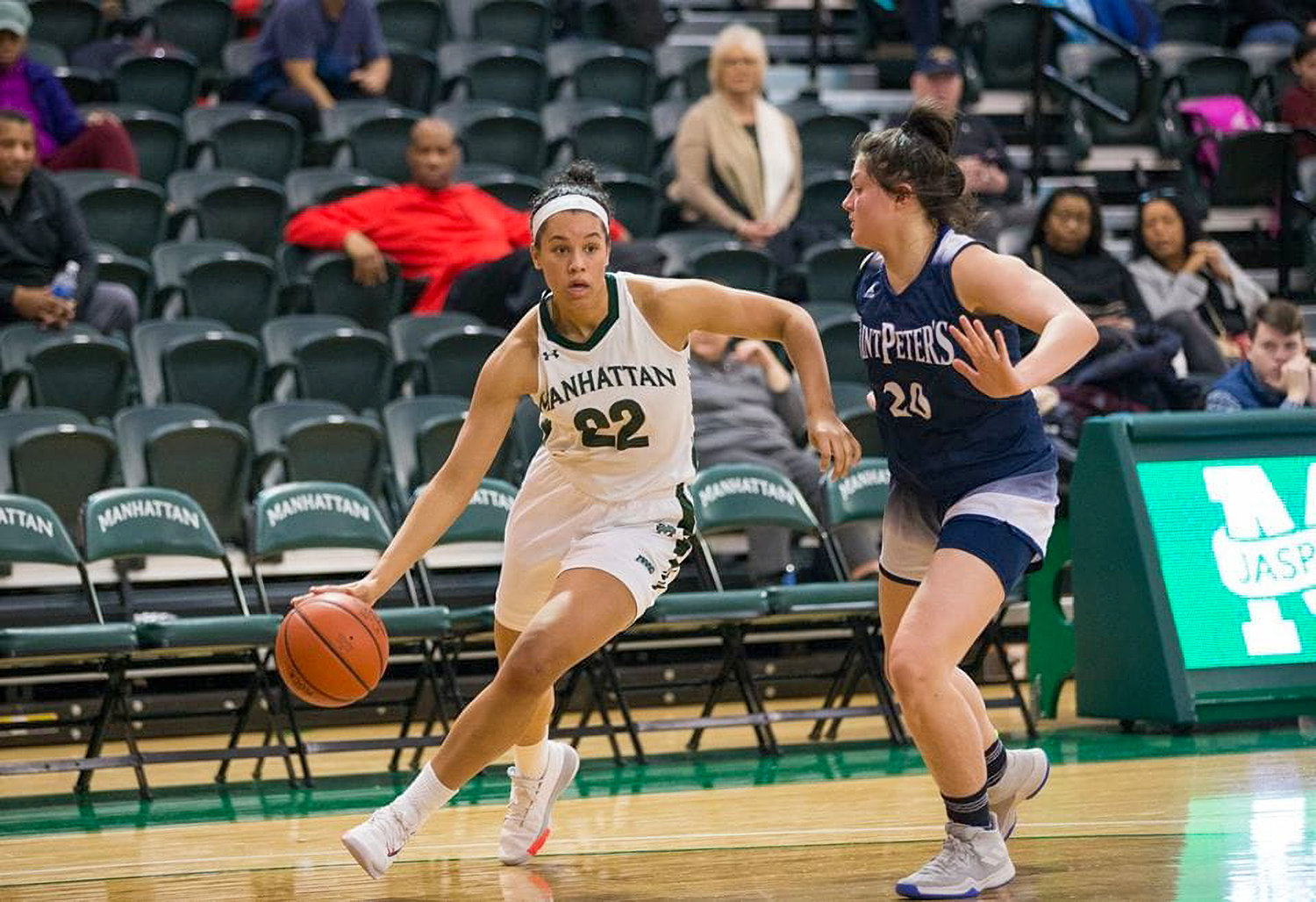 Courtney Warley played on the Manhattan College women’s basketball for five seasons, the last which ended in a trip to the Metro Atlantic Athletic Conference tournament title game for the Jaspers. Warley’s career at Manhattan was a resounding success from an individual standpoint, featuring a four all-conference team nods, MAAC Defensive Player of the Year honors, and Manhattan College Student Female Student-Athlete of the Year.
Courtesy of Manhattan College Athletics

I’m ... enjoying right now being able to put all my effort and thought into the game.”
COURTNEY WARLEY, player, S.L. Benfica
By Pete Janny

On what seemed like just another late August day Courtney Warley bid a temporary goodbye to her family and the familiarity of her whole existence.

With her ticket in hand, Warley boarded her flight to a new country, ready to embark on her seminal journey as a professional basketball player. As the plane touched down on the runway at Lisbon International Airport, the emotions hit Warley. She cried a little, she remembers, tears of excitement and nervousness and then some in between. Over the next eight months, her life would forever change.

The first few days in Portugal felt long. There were a lot of medicals and even more introductions to people. The most comforting part was that everyone welcomed Warley with open arms at her new club, S.L. Benfica, based in the country’s biggest city, Lisbon.

Benfica offered plenty of aspects which intrigued Warley. For one, the opportunity to live in the capital city of a European country was an attractive perk, offering an array of cultural experiences to help ease her adjustment. Since Lisbon is five hours ahead of New York, life has been more than manageable for Warley’s family and friends back home in Pennsylvania who communicate with her and watch her games.

The name recognition of Benfica was a beneficial factor, too, because it was sure to provide Warley the chance to travel the continent and play top competition.

It seemed like the next logical step for Warley, who achieved everything she could have dreamed of and more in her five seasons playing at Manhattan College. From an individual standpoint, there were still a few boxes Warley didn’t check at Manhattan as she ascended into the upper echelon of players in the Metro Atlantic Athletic Conference. She gave everything to help rebuild a program coming off an eight-win season when she got there, to then lead them all the way to an appearance in the MAAC Championship game last March.

Still, even for a player of Warley’s caliber, the goal of breaking into the international hoops scene was going to need an extra push to come true. As Warley continued her career at Manhattan, a trusted advisor emerged for her in assistant coach Callan Stores, the wife of Manhattan men’s basketball interim coach RaShawn Stores.

After a playing career at Sacred Heart University, Stores, whose maiden name is Taylor, went overseas to play and eventually made her way to Benfica for her last professional season in 2015. There, Stores won the league’s Most Valuable Player on the strength of a skill set which combined scoring and rebounding. Stores’ life and career had a clear bearing on Warley, who was also born to play the center position like her assistant coach.

“Coach Callan has been my go to from when I decided I wanted to play overseas in terms of all the help with the process and even now just staying in touch,” Warley said. “She obviously knew the type of player and person I am and I am super grateful that I had her during this process.”

When Warley signed for Benfica in August, hoops was not the only thought on her mind. After five years at Manhattan, including earning a masters in business management, Warley wanted to explore a new country for the first time in her life, all while her love for the game is as strong as ever.

“I’ve always had a lot of interests and I’m glad right now that you know I’m taking the last parts of what basketball has to offer me,” said Warley, who has already played games in four other European countries. “I’m kind of enjoying right now being able to put all my effort and thought into the game.

Warley has a few family members who have visited, including her father, Carlin, who starred on the hardwood himself and played alongside his brother, Jason, for Saint Joseph’s University in the early ‘90s. However, Carlin doesn’t view his daughter’s career as continuing the family legacy, per se, as much as he sees her carving out her own legacy. He couldn’t be more proud of watching her living out her dreams.

“For Courtney to play five years and graduate and get his master’s and then to be able to do this, I’m so happy for her,” Carlin said. “I couldn’t be more happy to have the two daughters I do have.”

When Carlin visited Lisbon the week before Thanksgiving, there was one unforgettable moment that stood out. After getting out of his taxi at the team’s facility, Carlin was blown away by the 80,000-seat stadium used by S.L. Benfica, known as one of the “Big Three” soccer clubs in Portugal. Benfica basketball has the same ownership as the soccer team.

“Courtney told me they are in the process of building a 120,000-seat stadium,” Carlin said. “So that tells you just how big Benfica is.”

On the hardwood, Warley and her teammates are currently competing in the Euro Cup against 16 other teams around Europe, which is in addition to their games in the Portuguese first division. They are 5-2 in Euro Cup play, and have not lost against domestic competition. In those undefeated league games, Warley is averaging 11.2 points per game.

“I came onto a team that has a very fast style of play in transition,” Warley said. “This was something that I was super excited about, and how Benfica values defense into offense is very similar to Manhattan and what I am used to. “

Carlin, a former coach, knows Courtney’s coaches are supporting her every step of the way to get better. He simply wants to be a distant observer,  but also available for whatever his daughter needs.

“She has always had phenomenal coaching,” Carlin said. “I’ve never really given them a lot of pointers in basketball. I just want to support them in life and be there for them.”

Only being five hours ahead means Warley can catch up with Jaspers’ basketball when Manhattan has afternoon games. For Warley, the next best thing to playing for the Jaspers is being a global ambassador for them.

“I am super happy here but I do miss everyone at MC for sure,” Warley said. “Basketball has a great way of connecting others and I am so fortunate to have been able to create some really great bonds with former MC teammates and coaches and other staff these last five years.”