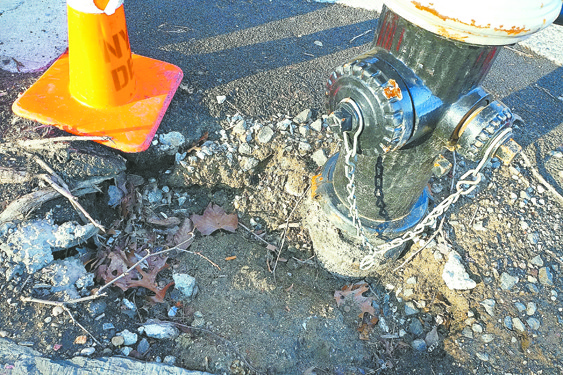 For more than three months, city agencies have not responded to residents’ concerns about a damaged sidewalk and broken fire hydrant in front of 525 W. 238th St.

In November, workers with the Department of Environmental Protection (DEP) replaced an old fire hydrant by the Fieldston Garden apartment building. During the undertaking, workers dug into the ground, causing cracks and unevenness on the sidewalk. DEP and the city’s Department of Transportation (DOT) did not respond to interview requests for this article.

A resident said in January, he observed water spouting from the ground around the hydrant while laborers were trying to work on water lines. The resident, Jim Grossman, added the sidewalk became further damaged during the course of the work.

“If they are trying to fix the fire hydrant, they should fix that first and not destroy the sidewalk — if it ever gets fixed,” Mr. Grossman added.

Last week, Capt. O’Connor of FDNY Engine 52 said a crew would see if there were any problems with the hydrant.

Mr. Grossman hopes that the sidewalk is fixed for safety reasons, since many elderly people with walkers live in the area.

A Nov. 19 email from the DOT to Robert E. Hill, Inc., which manages Fieldston Garden, stated,  “The Department of Transportation inspected the condition you reported and found that the condition meets its standards and/or there is a valid permit to conduct work.” It was not clear whether there are in fact any plans for repairs.