Astronomy students get chance after 40 years on Long Island 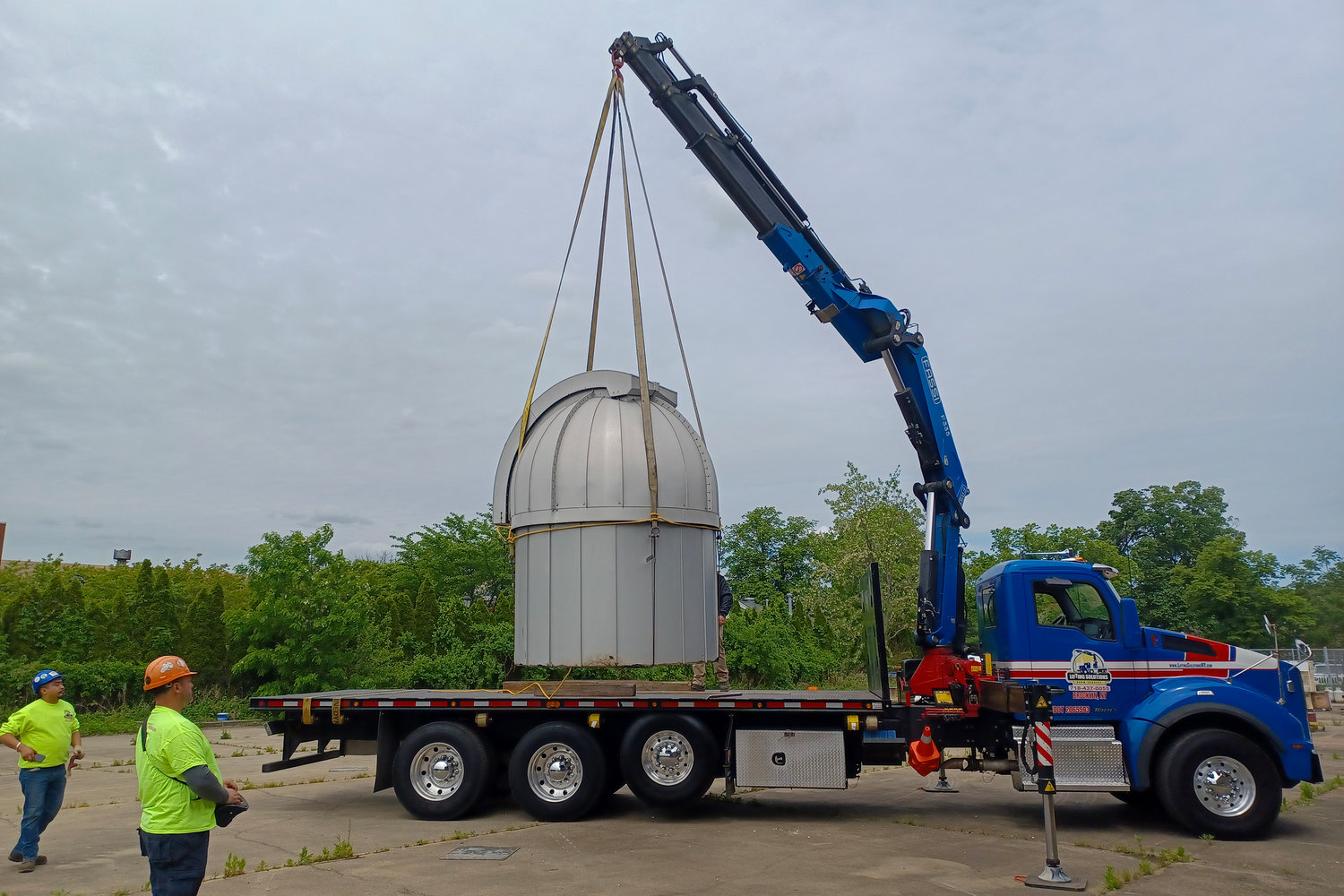 The observatory dome at Nassau Community College, at the construction site, next to the building it came off. That observatory is heading to Jerome Park Reservoir.
Courtesy of Bart Fried
By Stacy Driks

An observatory that was used for more than 40 years in Garden City needed a new place to call home. Students at Nassau Community College once had it on their campus until they began renovations to modernize the campus in 2019.

The college sent requests that year for anyone interested in taking their observatory off their hands. But there seemed to be no interest. A year later Bart Fried, the president of the Amateur Astronomers Association said it would be crazy if they threw out such an instrument.

“You have to have a place to put it,” Fried said. “If you don’t own the land, where are you going to put it?”

It took more than a year, but the group of amateur astronomers proposed to the New York city parks department to call the grassy banks of Jerome Park Reservoir its new home, next to Harris Park.

Right now the observatory is sitting in the Cradle of Aviation Museum in Garden City.

The Bronx relocation would be fully funded by the volunteer nonprofit astronomer association. They have a goal of $45,000 to fund the move and placement of the dome. Currently, they raised roughly $15,000.

The association is a client of Dirtworks Landscape Architecture, a firm which does landscape architectural projects all over the city for over 15 years. Alex Hart, the principal at Dirtworks, had worked for the city’s parks department in its capital division.

“This is a perfect location (Jerome Park Reservoir) to be far enough away from any structures to have the darkness required to actually be able to conduct the observatory’s operations,” Hart said.

The location is ideal because it is near the Bronx High School of Science, which Fried said is partnering with them. The school will help the association manage the observatory and the students might even use it for their studies.

The school currently has its own hybrid Bernard H. Mendik Planetarium with 35 seats. Students use their planetarium to learn about planets and constellations. Adding a public observation can serve as extra activities or help with their research.

“They will have keys, so to speak, to the observatory,” Fried said. “We hope they will sort of take emotional, if not legal, ownership of it and want to look after it.”

But the high school would be one of many that might be interested. There are least at eight schools located at least one mile away from the proposed observatory. Two of those are Dewitt Clinton High School and Lehman College.

On Dec. 3, students, mainly from Lehman College and the science high school, sat under the stars in Jerome Park to stargaze and hear stories about the galaxy and the plan to move the observatory to their neighborhood.

Organizers said the observatory would be locked when it not in use.

The main points of interest in the proposal focus on the prevention of graffiti and accessibility.

The quarrel between the community board and the proposal was the pathway leading to the sidewalk meant for accessibility through the Americans with Disability Act.

To make the observatory handicap accessible — a requirement from the parks department — a cement or concrete pathway will be paved. Hart said it would be small and won’t make an impact on run-off. But some community members beg to differ.

“Our chief of design and many of our commissioners looked it over a number of times, and they really felt that the amount of pavement here really isn’t a problem, as they mentioned it is going towards the grass,” said Michael Ortiz, chief of staff for the Bronx borough commissioner.

The original idea was a mat, similar to what beaches have for wheelchairs. However, the parks didn’t want that. Another idea was gravel or bricks. Fried said to install a permeable walkaway can cost $50 to $60 per square foot, while concrete is just $5.

“We’re kind of in this world now where we’re trying to be more aware particularly of water at the top of Kingsbridge Heights because you know everything that runs off, runs off down the hill,” said Debra Travis, the CB8 parks committee chair.

If the committee rejects the plan because of the concrete walkway, the organizers suggested writing it within the resolution. In return, the parks department can implement the community board’s decision.

“Their (community board) points are valid and we have said from the start that our project will be as green as possible,” Fried said.

But, if the parks department does not agree, Hart assured that the new walkway will not have an appreciable impact on the environment. The project planners anticipate that stormwater will stay out of the street, where there will be a small impact on the city stormwater system. Instead, the sidewalk is graded, and the stormwater will come off on an angle.

The Bronx Council for Environmental Quality disagreed with the proposal because they are against using impervious cover. Karen Argenti, a board member of BCEQ, claims even one inch of imperviable surface is too much.

Impervious surfaces cover 72 percent of New York City, while in the northwest Bronx it is 66 percent. These events can lead to storm and wastewater spilling over natural waterways, affecting water quality and recreation.

Producing concrete is a big contributor to greenhouse gas. Specifically, Portland cement creates a lot of carbon dioxide, Fried said. Even though there is no permeability, environmentalists are against cement everywhere.

“I’m happy to do whatever needs to be done. We initially didn’t want any sidewalks put in — Parks did,” he said to The Riverdale Press. “They (parks) were OK with cement, you’re not (BCEQ) so we will go back to find another solution.”

Worst-case scenario, Fried is willing to bite the bullet and agree to spend $25,000 on a sidewalk because money is not an issue for the non-profit association. However, he is not sure the other members of the association will agree to that since this is the largest project they pursued.

During the relocation, there will be some construction. But this will take only a couple of days, Fried assured. School buses that park there during school hours will not interfere with the observatory since it  is mainly used at night.

The dome will be painted white to avoid extreme heat inside the dome in the summer.

“At some point down the road, it was suggested that the observatory actually get, for lack of a better word, decorated, with maybe a mural around it or something, “Fried said.

The association needs to get approval by the buildings department and hopefully complete everything by spring. Fried will communicate with the parks department regarding the sidewalk.

“It’s pretty cool. It’s a win-win for the city, for our organization, for the schools, for the public — it’s education,” Fried said.

“And my understanding is there’s a lot of feelings about with people who live in the Bronx that they get overlooked as a borough.”