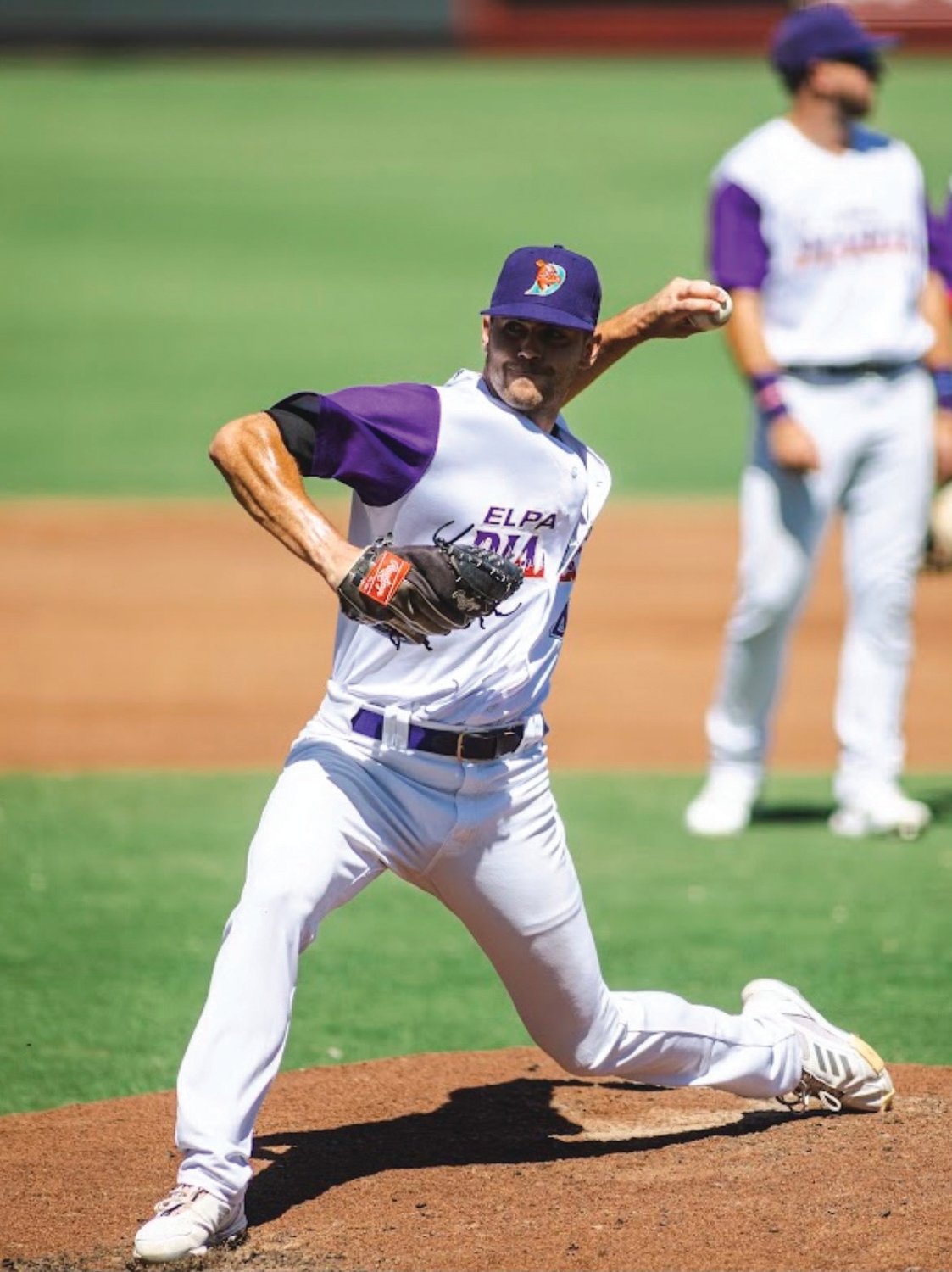 Tom Cosgrove spent the 2022 minor league season pitching for Double-A San Antonio and Triple-A El Paso for the Padres. His focus is now on 2023 spring training, which will be his first with the big league club.
Courtesy of Salgado Photo
By Pete Janny

All that Tom Cosgrove asked for was a fighting chance. The odds of making the big leagues were not in his favor — only about 10 percent of the hundreds of players who sign a pro contract in the same year appear in a Major League Baseball game. But the former Manhattan College standout is making a good bid to make it there, having been added to the 40-man roster of the San Diego Padres on Nov. 15.

The left-handed pitcher impressed in 2022 by pitching to the tune of a 3.72 ERA between Double-A San Antonio and Triple-A El Paso. His ability to throw strikes and induce swings and misses helped his cause on his way to striking out a career-high 13.3 batters per nine innings.

The Padres had no choice but to add Cosgrove to the 40-man roster or else lose him in the Rule 5 draft, which allows teams to select players from other MLB franchises who were passed over for a spot on the 40-man roster.

It was a necessary step for Cosgrove and his future with the team that drafted him. He wants to be part of the winning culture being built in San Diego one year after the Padres advanced to the National League Championship Series against the Philadelphia Phillies.

“I went to San Diego when the season ended when they (the Padres) were playing in the playoffs,” Cosgrove told The Riverdale Press. “The fans are unbelievable and the atmosphere was kind of unreal.”

Cosgrove was born in the Bronx and he lived there until his family moved to Staten Island. The son of a retired New York City firefighter, Cosgrove was recruited by Manhattan College during his stellar baseball career at Monsignor Farrell High School, where he was All-State his senior year. The Jaspers were always a name he heard of when living in the Bronx, so the decision to commit to Manhattan before his junior year almost felt like destiny.

Then, former Manhattan baseball coach Jim Duffy made a promise to Cosgrove that he would be in line to get playing time as a freshman. Duffy kept his word, as Cosgrove started 36 games for his career and finished sixth in career strikeouts with 225 in his three years at Manhattan.

“A lot of credit goes to Jim Duffy who kept his promise,” said Cosgrove’s father, Tom Sr. said. “He said he would get him up to the Cape Cod League if he pitched well as a freshman and he did and the rest is history.”

Cosgrove still remembers the moment he wholeheartedly bet on himself as a pro baseball player, coming two years after he was drafted by the Padres in the 12th round of the 2017 MLB draft.

He was fresh off a 2019 season in which he pitched across three levels of A ball and rookie ball. The results were a work in progress and there was still much to be learned. His earned runs average was above six, although the raw talent was clearly there. The onset of the coronavirus pandemic the following spring and the cancellation of the minor league baseball in 2020 put everything in perspective for Cosgrove, who was still recovering from Tommy John elbow surgery that offseason.

With full support from his family, as well as unwavering confidence in himself, Cosgrove re-committed to his love of baseball while living in Arizona and training at the Padres complex during the height of the pandemic.

“I told myself if I was going to do this year and a half rehab I’m gonna have to buy in,” Cosgrove said. “As crazy as it sounds COVID was a turning point for me in a good way.”

The rehab days were long in Arizona, but getting access to Peoria Sports Complex while society was in lockdown was almost like a saving grace for the promising ballplayer. His daily routine consisted of lifting and visiting with physical therapists, as opposed to throwing baseballs. He didn’t resume throwing until May 2020.

“When you’re not throwing a baseball you don’t know if you will ever be able to throw again,” Cosgrove said. “It’s more of a mental thing than anything.”

The hard work paid off, as Cosgrove returned to have a strong 2021 season mostly spent at Double-A. At the conclusion of the season, he was invited to pitch in the prestigious Arizona Fall League, but the results were still a little ways away. According to Cosgrove, there were some minor injuries holding him back.

“I went to the Fall league to dominate and put my name on the map,” Cosgrove said. “I finally got that opportunity but it didn’t go as planned.”

Entering spring training 2022, the Padres’ coaches saw things they believed Cosgrove should tweak, including lowering his arm slot to a more deceptive and athletic delivery. As a result, he began to pitch more “laterally” with the “whole strike zone being different” from Cosgrove’s view. The lower arm angle transformed his arsenal from a curveball and four seam fastball to a slider and a two-seam fastball, without much change in velocity.

Cosgrove admits he was hesitant to make such drastic changes. When he wasn’t pitching well early in the 2022 season, Cosgrove wasn’t sure about his future.

“I wasn’t pitching well and wasn’t throwing strikes,” Cosgrove said. “I was really skeptical about my future in the game.”

However, after getting sent back to Double-A, Cosgrove experienced a resurgence and hasn’t looked back since.

“I trusted them and I knew they knew what they were talking about,” Cosgrove said of the Padres’ coaches. “Our Double-A pitching coach (McCarthy) is awesome and he helped me out.”

Being the parents of a pro baseball player is a grind too. Cosgrove’s parents, Tom Sr. and Caryn,  have supported their son every step of the way, no matter the physical distance. This has been their son’s dream for as long as they can remember.

“He’s a middle to a late inning guy so he’s not pitching until 11 or 12’ o clock our time,” said Tom Sr., whose family still lives on Staten Island. “So we’re basically following every night during the season.”

The support from the baseball program at Manhattan also is felt. Former star pitcher Chris Cody has followed Cosgrove’s career from afar. Cody himself pitched in the minor leagues for a few seasons and can relate to the rollercoaster ride Cosgrove has been on.

“It’s easy to let some doubts creep in and think about maybe I should move on,” said Cody, who served as an assistant at Manhattan for the past five seasons.  “But I think it’s awesome that he stuck with it and Jasper baseball players everywhere are pretty tuned in to what he’s doing.”

Although Cody never coached Cosgrove, the two developed an instant connection since both their fathers were part of the New York Fire Department.  They later found out their fathers knew each other too, which was a cool moment to share for two New York kids who made their fathers proud.  On May 24, 2017, Cosgrove notched six strikeouts in seven innings against Iona to tie Cody for the program record of 105 strikeouts in a single season.

Cosgrove is joined by Joe Jacques as Jaspers chasing an MLB dream. Jacques was drafted by the Pittsburgh Pirates in the 33rd round of the 2018 MLB draft, and like Cosgrove, has put himself in position for a big league promotion by having success at Triple-A Indianapolis. The former teammates often bond over their shared journeys.

“Joe’s one of my best friends,” Cosgrove said. “Hopefully somebody along the line is thinking about coming to Manhattan and they look up my name and Joe’s name and it helps them make the decision to pitch there.”

Next season can’t come soon enough. Cosgrove will report with pitchers and catchers in early February, having no shortage of fans in his corner.