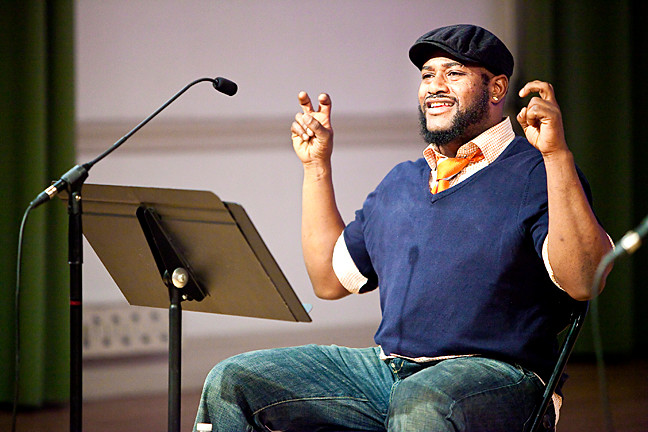 Miguel Alberto Phillips, a child and family therapist at Kingsbridge Heights Community Center, performs in ‘Listen To Me’ at University Settlement on Oct. 18.
Marisol Díaz/The Riverdale Press
By Sarina Trangle

Under dim stage lights, Ireen Ninonuevo, a therapist at Kingsbridge Heights Community Center (KHCC), leaned toward a microphone and began telling the story of a client she aided.

“It was a Wednesday,” said Ms. Ninonuevo, narrating the voice of Elena, a 42-year-old woman whose father began sexually abusing her when she was 13 and living in the Dominican Republic.

“My father called me downstairs,” Ms. Ninonuevo said.  “He was waiting for me. He looked different. There was a strange lump in his pants. I asked him, ‘Are you feeling sick?’ I didn’t understand. He started to touch me. I didn’t like it.”

The 75 audience members sat in silence in the University Settlement in the lower East side of Manhattan as the narrator continued.

“The next Sunday he offered to take me to lunch,” Ms. Ninonuevo said.  “But instead he took me to a hotel and raped me. This would be his routine for the next four years.”

This Oct. 18 performance titled Listen to Me: Stories of Child Sexual Abuse Survivors and Those Who Help Them was staged to highlight the frequency of child sexual abuse and encourage discussion about ways to treat, prevent and combat further violence.

The production was a collaboration between the Kingsbridge Heights Community Center and Ping Chong and Company, a theater organization focused on the interplay between race, culture, history and art. Using the oral history model Ping Chong and Company employs for its series on sexual abuse survivors, co-writers Jesca Prudencio and Ms. Ninonuevo interviewed KHCC staff and abuse survivors.

KHCC’s Child Sexual Abuse Treatment and Prevention Program is the only free, long-term treatment of its kind available to Bronx residents. Anyone age 3 or older who lives in the Bronx and was sexually abused during childhood may sign up for treatment at KHCC, even if they do not have health insurance or citizenship papers.

Kingsbridge Heights Community Center, Ireen Ninonuevo, Listen to Me: Stories of Child Sexual Abuse Survivors and Those Who Help Them, Ping Chong and Company
Page 1 / 3