State of State outlines how to get there, touching on such topics as economy and crime 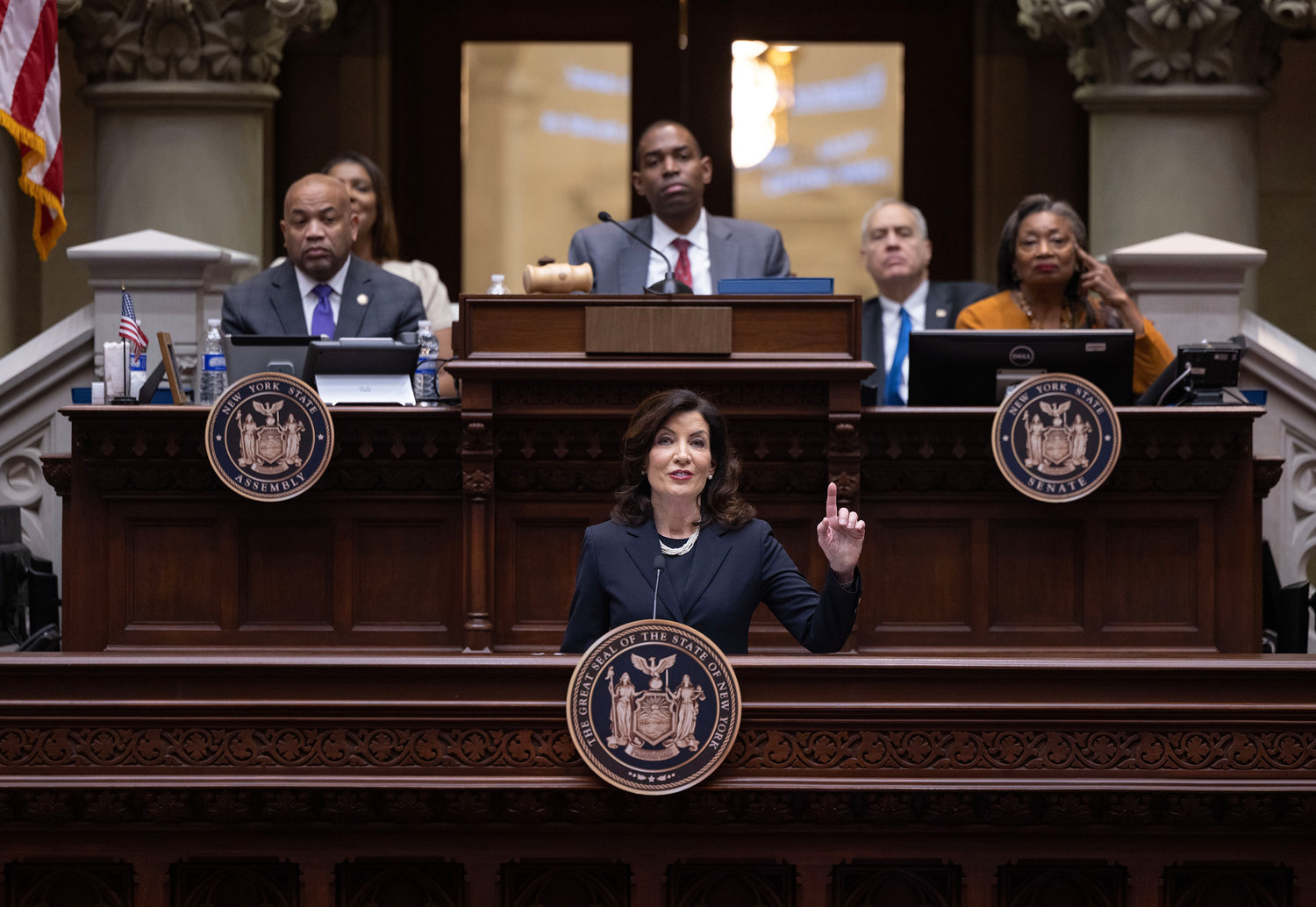 Gov. Kathy Hochul delivers her 2023 State of the State address in the Assembly Chamber at the State Capitol last week.
Courtesy of Mike Groll
By Sachi McClendon

During the annual State of the State address on Jan. 10, the incumbent Democrat highlighted her success in the 17 months since she replaced Andrew Cuomo.

“My fellow New Yorkers, after three very difficult, tragic, painful, years I’m proud to say that the state of our state is strong, but we have work to do,” Hochul said early in her address. “Last year, in the face of immense hardship and uncertainty, we endured. We proved to the world that New York may get knocked down. But we always, always, get back up.”

Throughout the speech, Hochul continued to highlight the successes the state has seen under her leadership, while also focusing on how she plans to improve the wellbeing of New Yorkers.

Public safety was a top priority for Hochul in the address, likely a response to this year’s surprisingly competitive gubernatorial election, in which her opponent, Republican Lee Zeldin, a former congressman, made rising crime a centerpiece of his campaign. As for concrete policy changes, Hochul wants to tweak bail reform another time, eliminating a rule that requires judges to set the least restrictive bail possible for those charged with crimes.

“First, the size of someone’s bank account should not determine whether they sit in jail, or return home, before they have even been convicted of a crime. That was the goal of bail reform. It was a righteous one, and I stand by it. Second, bail reform is not the primary driver of a national crime wave created by a convergence of factors, including the pandemic. And third, that the bail reform law as written now leaves room for improvement,” Hochul said.

“As leaders, we cannot ignore that, when we hear so often from New Yorkers that crime is their top concern.”

Hochul said she will also make the largest investment ever in the gun violence reduction program, known as Give, while also directing the state police to play a more direct role in combating violent crime.

“Big emitters will have to purchase permits to sell polluting fuels. The dirtier the fuel – the bigger the price tag. And the ‘invest’ part of the program will accelerate the clean energy transition,” she said. “What’s great about cap-and-invest is that it offers us flexibility, so we can focus our efforts on the biggest polluters and ensure families, farms and small businesses aren’t crushed by costs.”

In a similar vein, Hochul also proposed a plan to end the sale of any new fossil-fuel-powered heating equipment by 2030, and that all new construction to be zero-emission by 2025 for small buildings and by 2028 for large buildings.

“New York’s status as a hub of innovation is more than just a historical legacy, it charts our path to a brighter and more prosperous future,” the governor said. “By focusing on high-growth industries like high technology, life sciences, and advanced manufacturing, we will continue to unlock new opportunities, keep New York’s economy one step ahead of the technological curve and remain a leader in creating the jobs of tomorrow.”

During her speech, Hochul noted that some of the largest economic investments ever in the state’s history came last year, including $20 billion from IBM and $100 billion from Micron, which is estimated to create 50,000 new jobs.

To also help boost the state economy, Hochul wants to tie the state’s minimum wage to the inflation rate, after the average monthly cost of goods and energy for low-income households has jumped by more than 13% percent in just two years, according to her administration.

“That pushes families on the margins to the breaking point. So, as a matter of fairness and social justice, I am proposing a plan to peg the minimum wage to inflation,” she said. “If costs go up, so will wages … but this important change will give the nearly 900,000 minimum-wage workers a lifeline. Those workers are more likely to be women, many of whom are single moms, and they are more likely to be people of color.”

To close off her speech, after quoting former First Lady Eleanor Roosevelt, Hochul said, “We will do the hard things, the necessary things, to lift up and support New Yorkers and clear a path for them to realize the New York Dream. That is my promise to the people of New York, and I will work with the members of the legislature to keep that promise.”