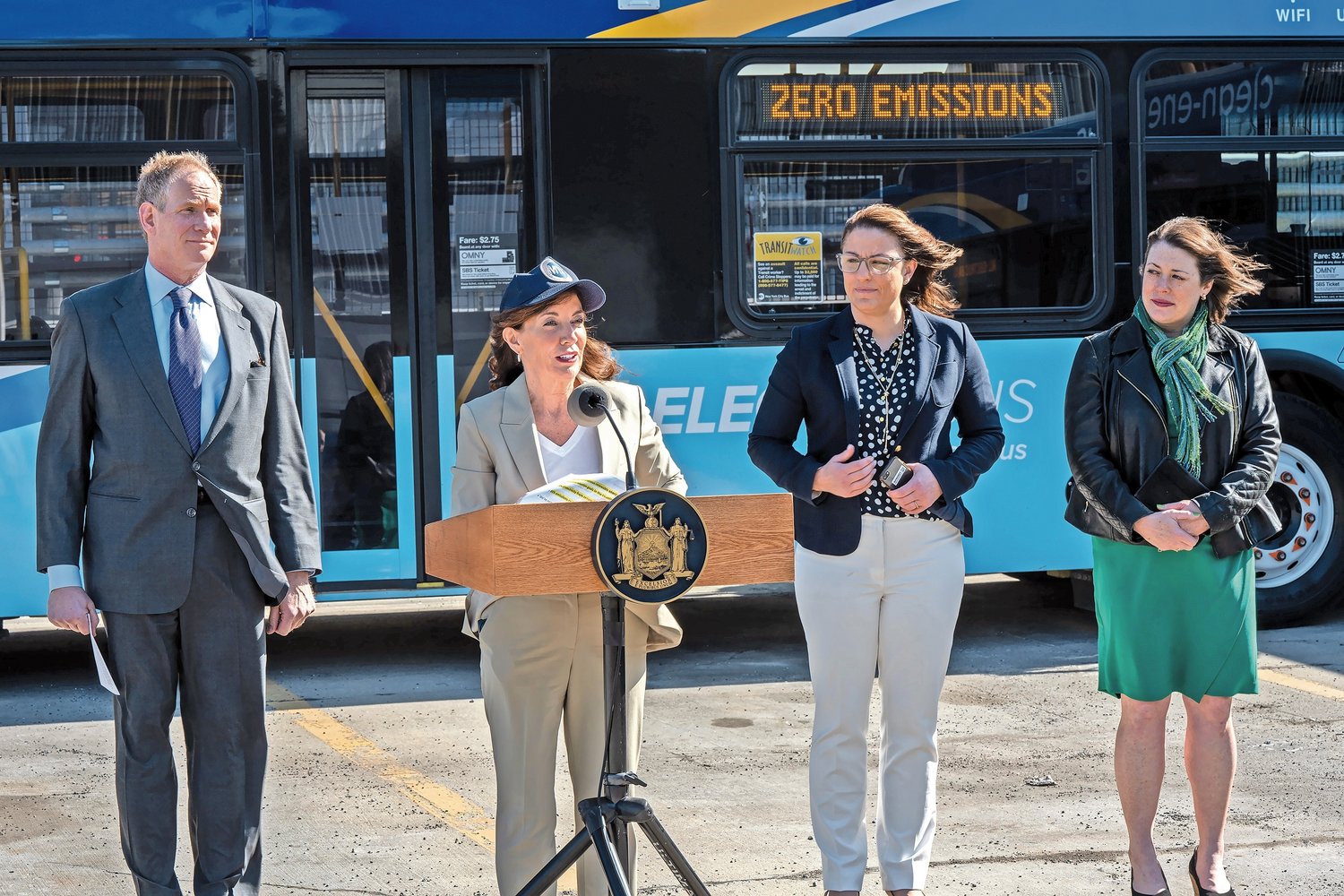 On Earth Day, Gov. Kathy Hochul announces a new fleet of all-electric MTA buses, some of which will launch from the Kingsbridge bus depot.
Courtesy of Gov. Kathy Hochul/Darren McGee
By Stacy Driks

The Kingsbridge bus depot will be one of six in the five boroughs to replace diesel-guzzling commuter buses with electric vehicles this fall, the MTA announced recently.

It is part of Metropolitan Transit Authority long-term plan to fight climate change by upgrading its entire bus fleet of 5,800 buses by 2040.

The plan is to replace at least 230 of buses at the six bus depots thanks to a $116 million federal grant from the Federal Transit Administration. The money is some of the funds made available from President Joseph Biden’s infrastructure law.

Five of the depots will be equipped with new state-of-the-art charging infrastructure to support the MTA’s growing electric bus fleet starting in the second half of this year.

In addition to Kingsbridge, the other depots launching the electric buses are Grand Avenue, Charleston, East New York and Jamaica. The on-route charger at Williamsburg Bridge Plaza will also receive updates. All infrastructure upgrades will be completed in advance of bus arrivals at each depot.

“When President Biden signed the ($1 trillion) Bipartisan Infrastructure Law in November, it created an unprecedented opportunity for us to drastically improve the lives of those millions who ride the bus every day,” said Federal Transit Administration spokesperson.

Under the infrastructure law, the FTA awarded New York City $1.1 billion for the low-to-no-emission project. It is expected to have an impact on reducing gas emissions and improving air quality in neighborhoods.

The FTA believes the city will indeed save money because electric buses are easier to maintain and are less expensive the current ones.

Residents such as Danny Rogers are quite thrilled about the new plan, despite his previous uproar over the city regarding idling buses. He says he is pleased that there are going to be improvements.

“I would love it,” Rogers said. “It’s amazing and so much better for everyone and especially for me, I don’t need to smell nasty diesel smoke.”

In March Rogers was begging the city to do something about idling buses in front of his Delafield home near Riverdale Avenue and West 263rd. Daily life was not easy for him and his neighbors.

Bus drivers naturally sit in the bus before their route starts. However, during the cold season, drivers needed to stay warm somehow.

The smell of diesel fumes will trap Rogers’ family and neighbors once buses pass by their homes. And that can be a problem for people with such breathing issues as asthma.

“We are at a time where rates of asthma are soaring in The Bronx, and scientists across the globe are pleading with governments and private industry to take these steps to protect the livability of our earth,” said Councilman Eric Dinowitz in a statement.

Asthma is a chronic disease of the airways and causes difficulty in breathing. Many people are sensitive to this for different reasons, one being the environment.

The MTA is beginning the switch for communities who have a high risk of asthma, as they call it, “environmental justice communities.”

Rogers along with the rest of the Bronx will see the first round of battery buses as the pollution vehicles get off the streets. The services that will promote a change are: Bx3, Bx7, Bx10, Bx13, Bx18, Bx20, M100.

By 2029 the city will only purchase electric buses, head of buses, Craig Cipriano said.

But to fully change the fleet and reach the target of zero emission, the MTA needs a steady supply of electricity.

“We’re going to be doubling down our partnership with New York Power Authority and ConEd,” Cipriano said.

Those are “two agencies that are so critical to brings this to fruition.”

During the pilot program, they acquired 25 fully electric buses and found that it can run for four hours. But the question is about some of MTA’s longer routes.

Can every bus make the full trip? To charge a bus it required eight full hours.

Electric buses could travel 90 miles before needing more juice at a depot. Yet, the seasons affect the charges as well, Cipriano said during an interview with Streetsblog.

He claimed that one third of the year buses consume more power. That is during the colder seasons. The only attempt the MTA can make are to change schedules or improve their technology.

Cipriano believes a major policy shift can help solve problems in case of a natural disaster, such as a hurricane that can take out the city’s power.

What would happen then?

The Kingsbridge depot will have new state of the art charging infrastructure to support the MTA’s growing electric bus fleet.

The MTA has already 1,300 low-emission hybrid buses that run on battery-only EV mode a portion of the time.