Let this be our last pay phone? 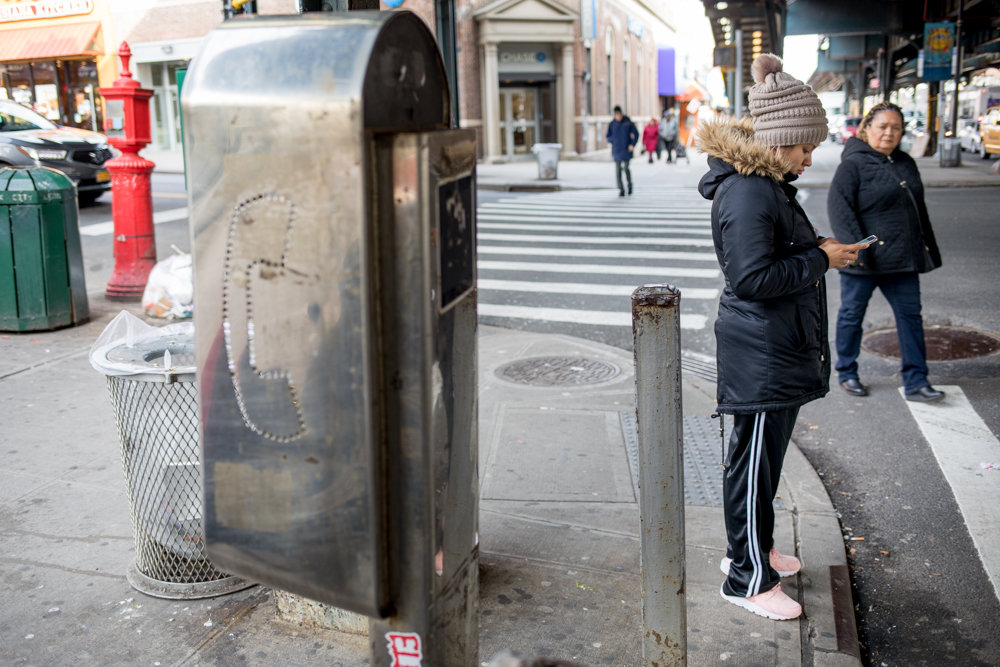 A pedestrian checks her phone while waiting at a crosswalk near a defunct pay phone at the corner of Broadway and West 231st Street. Some of the last few pay phones in Kingsbridge could be replaced by LinkNYC kiosks, which would bring free Wi-Fi, smartphone charging, a tablet to access city services, maps and directions to a handful of spots in the neighborhood — not just on Broadway, but also along Bailey Avenue.
JULIUS CONSTANTINE MOTAL 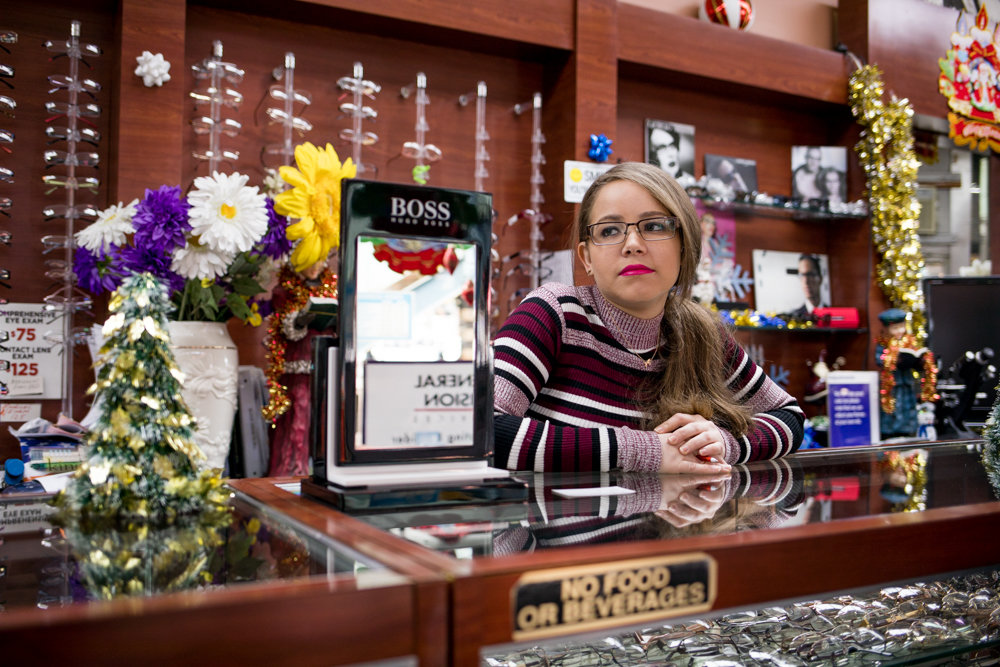 Esther Abreu, who works at Broadway Eye Care on West 231st Street, believes installing LinkNYC kiosks could be a good thing in Kingsbridge, offering free Wi-Fi and a place for commuters to charge their smartphones or look up directions. But doing away with pay phones could come as a shock to less tech-savvy elderly residents who more frequently rely on traditional pay phones to get in touch with friends and relatives, and might find using the kiosks perplexing.
JULIUS CONSTANTINE MOTAL 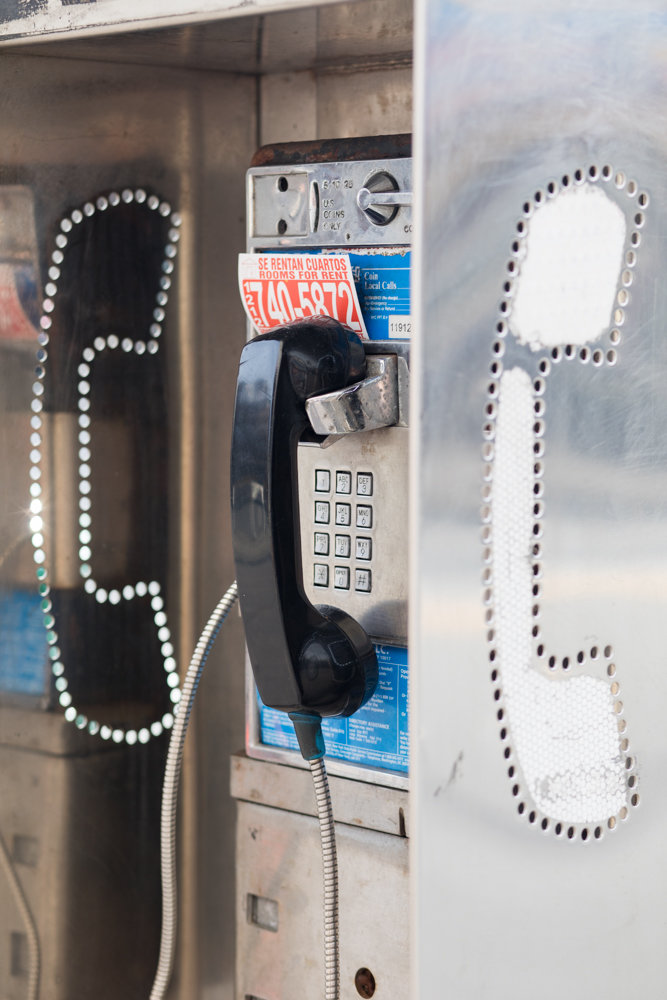 Pay phones could soon be no more, with LinkNYC kiosks set to replace the last few iconic — but some would say archaic — phones in Kingsbridge, like this one at West 231st Street and Bailey Avenue. The kiosks would offer free Wi-Fi, phone calls, and cell phone charging, but have generated heated discussion in some places they’ve already been installed in other parts of the city from pedestrians viewing explicit material.
JULIUS CONSTANTINE MOTAL 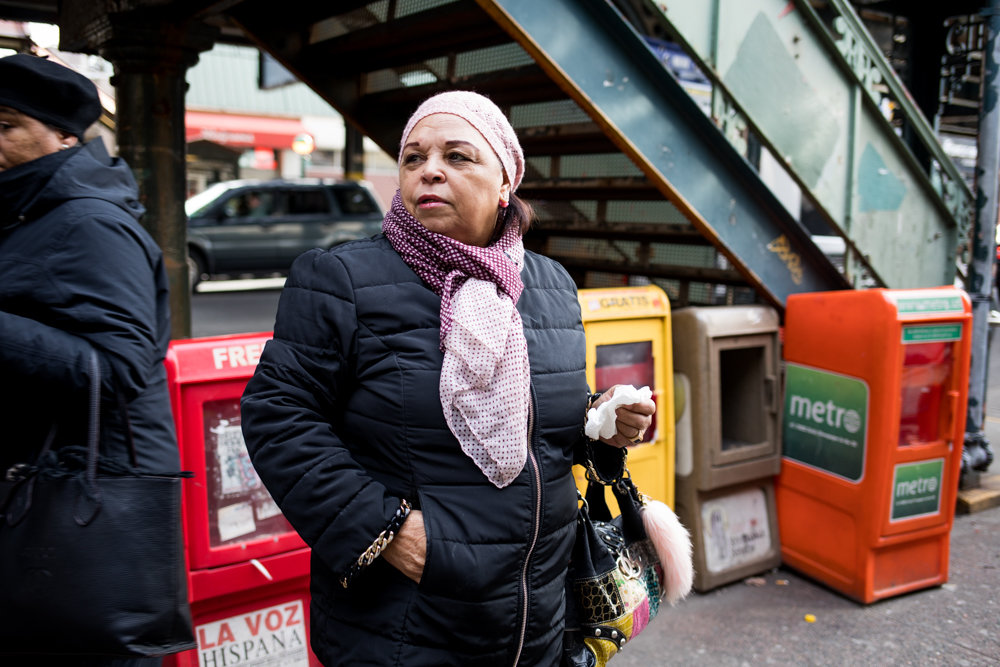 Maria Sanchez — who lives near West 231st Street and Bailey Avenue — believes LinkNYC kiosks would improve the look of what she described as some crumbling corners in Kingsbridge, plus provide technology that could help people get around and make it easier to communicate with each other. She’d welcome installation of the kiosks, even if it meant saying goodbye to some of the area’s last pay phones.
JULIUS CONSTANTINE MOTAL 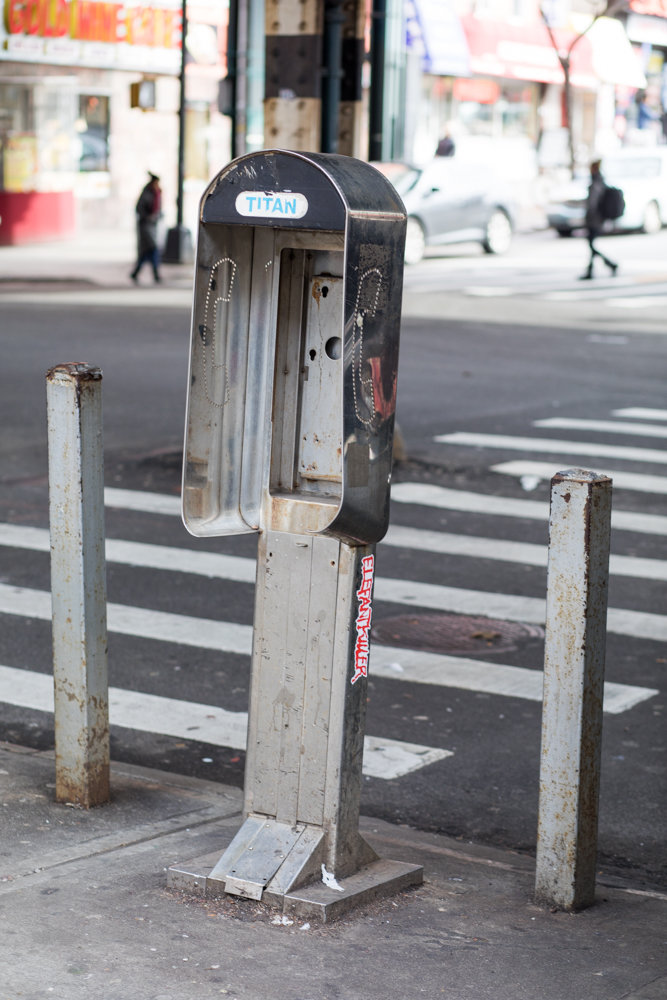 A defunct pay phone near 5571 Broadway might totally disappear with a LinkNYC kiosk taking its place in the not-too-distant future, said Community Board 8 traffic and transportation committee chair Dan Padernacht. The kiosks would offer a range of services — including free Wi-Fi and smartphone charging — but they’ve also given rise to controversy over reportedly salacious material accessed on the structures’ tablet-based web browsers — which the company removed in 2016 after receiving complaints.
JULIUS CONSTANTINE MOTAL
Previous Next
Sayonara to pay phones?

LinkNYC kiosks — offering free public Wi-Fi, phone calls, cell phone and other gadget charging, plus a tablet for accessing city services, maps and directions — could come to several bustling Kingsbridge corners, meaning it may be time to bid pay phones there adieu.

“Link would bring significant public benefits,” a spokesperson for the company told The Riverdale Press, although they don’t have a specific timeline yet for deploying them in Kingsbridge, Marble Hill or Riverdale.

Nearly 6 million people already have jumped on the free Wi-Fi, with tens of thousands of new users reportedly joining the network each week, while the system sees more than 600,000 phone calls made a month, according to LinkNYC, which installs the kiosks through an agreement with the city.

Additionally, the kiosks display real-time weather and transit information, plus info on local events and museum exhibits — which is all totally free, and costs taxpayers nil.

In addition to Wi-Fi, the most commonly dialed number from the kiosks is for the state’s temporary and disability assistance office, which helps struggling families afford healthy food, and other assistance, the spokesperson said. LinkNYC also offers free advertising on the kiosks to local businesses.

LinkNYC removed the tablet-based web browser in 2016 after some neighbors complained about people monopolizing kiosks, which “immediately” reduced loitering complaints by a reported 96 percent. Now, the tablet only can be used for phone calls, directions, reaching city agencies, local community board websites, social services portals, weather and transit information.

“Installing and activating the Link network is a massive infrastructure project” four years underway, the spokesperson said, with more than 1,700 kiosks installed citywide.

And more planned — including, apparently, in Kingsbridge.

Before phones could fit in your pocket, making a call away from home required a quarter and what was one of thousands of pay phones throughout the city.

But those phones are quickly heading to extinction, with one of the last pockets along a sizzling strip of Broadway and in other parts of Kingsbridge about to disappear.

The technological dinosaur could soon make way for LinkNYC kiosks, providing free Wi-Fi to pedestrians and businesses, plus a place to make calls, charge smartphones and other gadgets, as well as a tablet to access city services, maps and directions.

But even more important for the CityBridge Foundation, they’re also perfect for poster-size digital advertisements, and already have become commonplace around Manhattan and Brooklyn.

The kiosks haven’t come without controversy since the first ones were installed around 2015. For some, those kiosks conjure unsavory memories of internet users gawking at X-rated images on big, bright, billboard-like screens. Yet, with the impending possibility of pay phones disappearing from various Kingsbridge corners, some Community Board 8 members are concerned some might lose their preferred tried-and-true pay phones.

The city told CB8 it expects to replace pay phones at a handful of locations. They include the corner of West 231st Street and Broadway, West 231st and Bailey Avenue, Bailey at West 238th Street, and Broadway near West 242nd Street.

In the last couple years, there’s been no shortage of media chatter about LinkNYC’s kiosks, said Dan Padernacht, chair of CB8’s traffic and transportation committee, who is scheduled to discuss the issue at a Jan. 17 public meeting.

“Some individuals have used these kiosks to search lewd material on websites,” Padernacht said about other locations where LinkNYC already has kiosks. “I felt it was important to put it on our committee agenda in order for the community — particularly residents or businesses at or near these locations — to comment on the installation of these kiosks before it occurs.”

But there are two sides to the coin, Padernacht said, since the kiosks provide free Wi-Fi to smartphone and other device owners, plus the ability to make phone calls or figure out how to get from, say, Bailey Avenue to a doctor’s appointment in Midtown.

Still, there’s also concern about how plopping them down in a place like Kingsbridge — where some neighbors cherish the way their neighborhood has looked for decades — could affect this particular community’s overall look and feel.

That’s why the aesthetics are crucial to consider, Padernacht said. “I do want to make sure that the community doesn’t have any concerns with the way in which these kiosks will blend in with the community.”

Even so, “I believe with any new technology or system implemented by the city, the public will adjust and become familiar with the technology,” Padernacht added.

Not surprisingly, some neighbors share some of Padernacht’s ambivalence, while others see LinkNYC kiosks as a welcome upgrade to what they believe is a neglected — and in some spots — crumbling part of the borough.

Esther Abreu, who works at Broadway Eye Care on West 231st, believes the kiosks could be a place for commuters to charge their phones or find directions. But doing away with pay phones could come as a shock to the neighborhood’s less tech-savvy elderly residents, who more frequently rely on traditional pay phones to get in touch with friends and relatives, and might find using gaudy kiosks baffling.

Meanwhile, Maria Sanchez — who lives near West 231st and Bailey — is all for a kiosk replacing a defunct public pay phone booth under the roaring 1 train right outside Abreu’s workplace, which no longer even has an actual phone in it.

Based on what she’s heard about them, it sounds like kiosks could offer her and neighbors more options to communicate with each other, and even with city agencies, Sanchez said in Spanish. Plus, keeping the neighborhood technologically apace with other parts of the city — like tourist-saturated Midtown, where kiosks seem to be somewhat more prevalent — is “very important,” she added, especially in an area characterized by markedly old fixtures and infrastructure.

Still, for Kingsbridge teens, young professionals, the 20-something nighttime set, and most neighbors who already use a smartphone or similar devices, the kiosks would be a boon.

Florence Vidne — visiting Kingsbridge from France’s Réunion Island on a sunny but frigid morning — claims she’s not very familiar with either this part of the Bronx or LinkNYC kiosks. Still, internet service, Wi-Fi and maps would probably be a plus for both visitors and residents navigating the sprawling metropolis, or just getting from Broadway to Johnson Avenue for a quick bite.

While the city had asked CB8 to get back to them by Jan. 15 with feedback from neighbors and local businesses, the board requested a bit of leeway, pushing it until the end of the month, Padernacht said, to give anyone who wants to speak up at the Jan. 17 meeting a chance to do so. That meeting is set to begin at 7 p.m., at The Riverdale Y, 5265 Arlington Ave.

As for Padernacht, he’s still somewhat on the fence about this push into the future.

“On a personal level, I don’t know that I would want (a kiosk) right in front of my home,” Padernacht said. “That’s why I think having a public meeting for the community to express concerns is important.”