Episcopal Church of the Mediator launches a feasibility study for sale 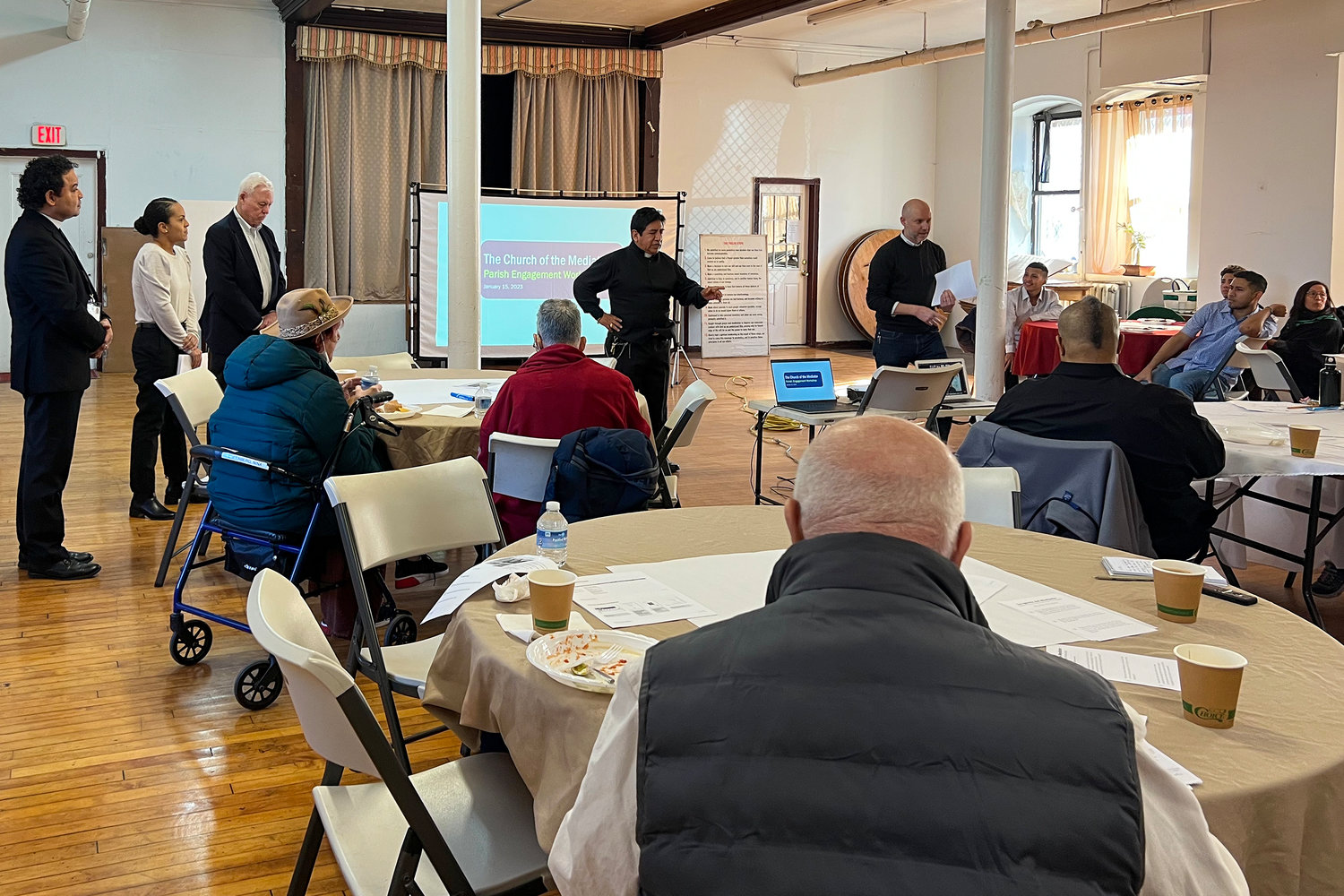 Priest-in-Charge Luis Enrique Gomez, center, makes opening remarks at the parish engagement workshop that took place in the basement of the Church of the Mediator on Kingsbridge Avenue on Jan. 15.
ABIGAIL NEHRING 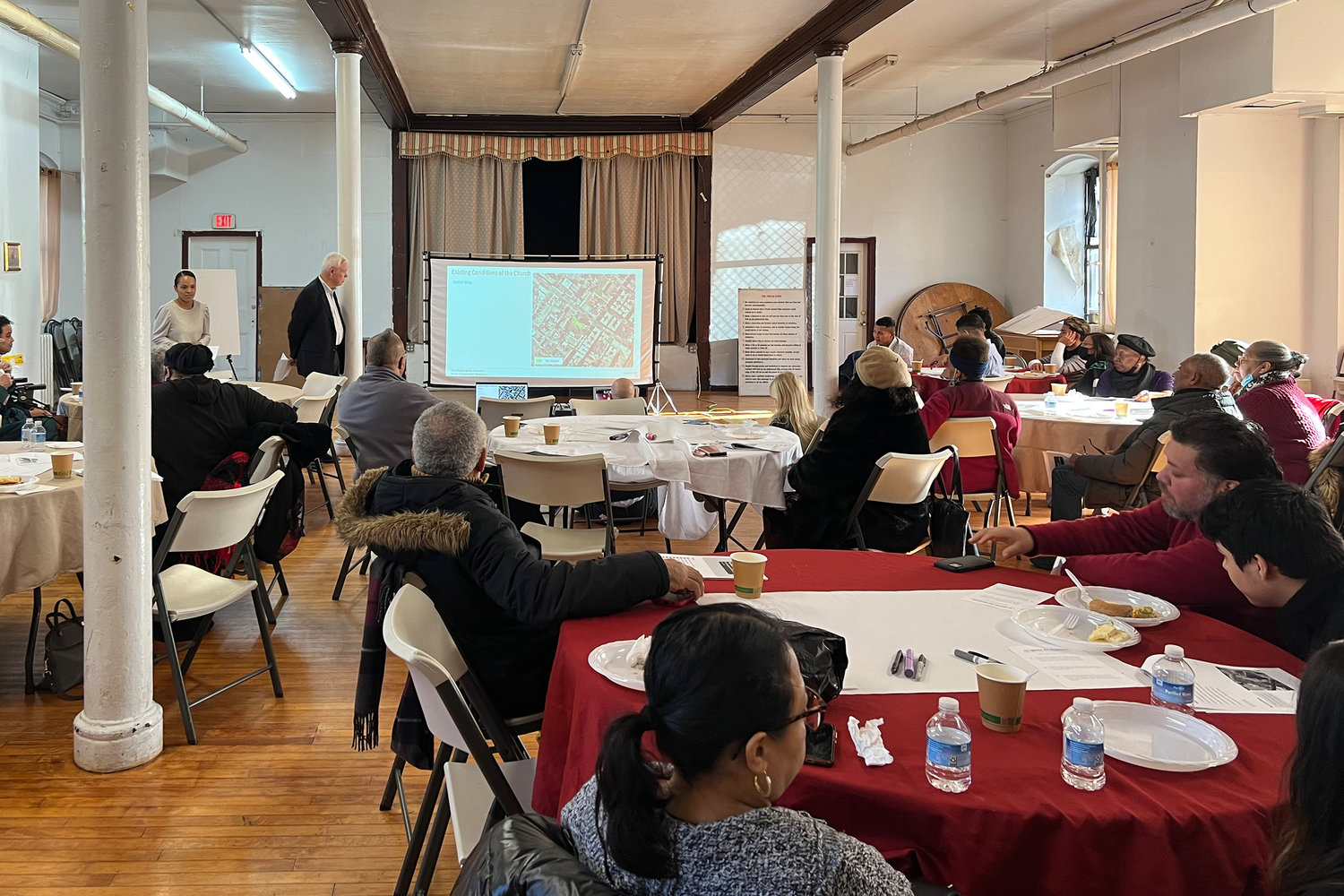 Frank Fish, a city planner and founding principal of BFJ Planning, presented on future development schemes the firm has identified for the Episcopal Church of the Mediator’s 1.7-acre property in Kingsbridge. The church committed in October to a two-year timeline to close on a deal with a developer and beginning repaying more than $660,000 it owes to the Episcopal Diocese of New York.
ABIGAIL NEHRING
Previous Next
Support journalism

Members of the Episcopal Church of the Mediator in Kingsbridge took their first faltering steps Sunday afternoon towards a development plan that will level the 100-year-old neo-Gothic cathedral. It’s their only hope to dig the struggling church out of debt.

About 30 people took part in a parish engagement workshop in the church’s basement following the morning service. Both longtime church members and nonmembers were allowed to participate. Attendance at Sunday services currently hovers around 50.

The mood was somber.

The ideas they voiced will go into a report the church will hand to Trinity Church Wall Street, the philanthropic arm of the historic Episcopal church in lower Manhattan, which gives grant support to parishes undertaking real estate development.

Trinity’s funding has so far gone towards a building survey completed in March 2022, a zoning study completed in July, and engineering assessments carried out in August and September.

In October the lay leaders of the church voted to sign a promissory note committing them to a two-year timeline to close on a deal with a developer and begin paying back more than $660,000 in deferred payments to the diocese, plus up to $350,000 in additional predevelopment loans it’s eligible for.

“I think we all have to recognize that American culture has changed so much in the last half century,” said the Rev. Canon John Perris from the sidelines as worshippers took their seats at banquet tables around the room. “We at the Episcopal church have many congregations that are struggling because that public support and that expectation that you go to church, you go to synagogue or temple, has evaporated. And of course, the pandemic made things even harder.”

A projector flickered to life at the front of the room and the workshop got underway. Historical images of the 1914 stone church appeared on the screen.

“The church was incorporated in 1855. The first church was a wood building completed in 1857,” junior warden Mathew Ford told the participants, pausing between sentences so Priest-in-Charge Luis Enrique Gomez could translate into Spanish.

The present church designed by architect Henry Vaughan was built in 1914 and consecrated in 1927. Pieces of the surrounding lot were sold in 1982 and 1998.

There were presentations from the Rev. Canon Victor Conrado and diocesan property services director Egbert Stolk, who have worked with other New York City parishes that have arrived at the same crossroads.

“This will be a transparent process,” Stolk told the participants. The aim, Stolk said, was to reach financial stability and meet the needs of the surrounding community in Kingsbridge.

Frank Fish, a planner and founding principal of BFJ Planning, spoke about the zoning study his firm completed last summer, resulting in nine schemes for developing over or around the existing church building. Four have since been eliminated, leaving five that all include demolishing the church.

The Episcopal Diocese began to take a new tone on property development after its 2016 convention, recognizing the need for mission-based management of its parishes’ most valuable asset — their real estate.

Churches in New York must petition the attorney general in order to sell or lease their property. Several levels of consent and notification are required at the diocese and parish level. Episcopal churches must hold a vote in the presence of the church rector.

During break-out sessions, some participants in Sunday’s workshop were more at ease with the future development of the property than others.

On a sheet of paper left scattered among the handouts at the end of the workshop, one participant had written, “The diocese looks out for its own so they will ensure the vestry will have an apartment for the priest. Members will not be able to afford this ‘affordable housing.’”