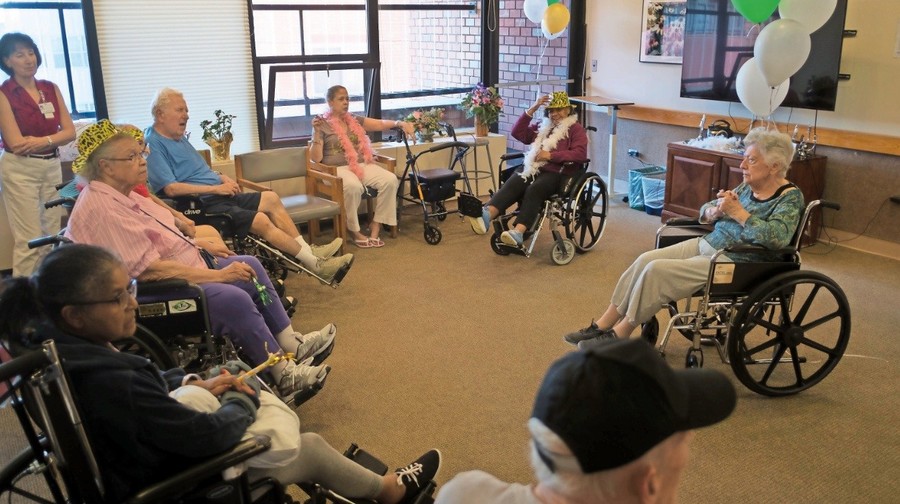 Regina Spierer, who turns 102 in September, talks to residents at the Hebrew Home at Riverdale.
Julius Constantine Motal
By Remi Kumar

To say that Regina Spierer is an older member of the Riverdale community would be a grand understatement.

Spierer, who turns 102 in September, was around before Girl Scouts were selling cookies, before basketball players were wearing Converse Chuck Taylor All-Stars, and even before Mexico’s constitution was written.

As one might suspect, Spierer has accumulated a plethora of wisdom and life experiences during the century she has lived, and she imparted some of that knowledge in a recent inspirational speech to fellow members of the Hebrew Home at Riverdale.

Spierer lives in Skyview, but is recovering from a stroke at the Hebrew Home, rehabbing her left arm. Yet, her connection to the Hebrew Home runs deeper than simply being a centenarian patient — Spierer actually worked at the Palisade Avenue facility for 19 years as an occupational therapist.

As Spierer was wheeled down the hall from her corner room to the center of the floor, loud upbeat music and balloons filled the air. Seven other patients were waiting in a rough semi-circle sporting brightly colored hats, but the room quickly filled upon her arrival.

Spierer, however, wasn’t impressed with the festivities surrounding her visit. “It’s not a funny show,” she said.

Once everyone settled in, Spierer expressed her gratitude to the Hebrew Home, which she called a savior. Then she recalled her experiences growing up in her native Austria and how when Hitler first came to her country, he was welcomed.

She spoke about how she came from a small town where there were very few Jews, and she had several friends who were what she called “illegal Nazis” prior to Hitler’s invasion. Her family fled to France for their safety and Spierer spent time in Israel before coming to the United States.

She then pivoted to her view of the world today and how it was filled with violence.

Spierer believes seeing that type of violent, despair-inducing news caused her stroke in the first place. She recounted spending her days doing nothing but sleeping. Nowadays, however, she is a completely different person. Although she depends on a large pair of blue headphones connected to a microphone to hear, Spierer shows no other commonly associated traits with someone her age.

In fact, her son Henry went as far as saying she’s better now than she was before the stroke, mostly because she’s found energy.

After her 10-minute speech, Spierer took some questions from the small crowd gathered in a circle around her. One person asked what advice she might have for future generations.

“Be honest, be strong, and believe in yourself,” Spierer said.

Spierer ended her talk by remembering the Hebrew Home as her second home while she was working there. During her years as an occupational therapist, she was particularly adept at setting up looms, used to help patients work on their fine motor skills and improve hand-eye coordination, as well as making splits that immobilized broken bones and supported damaged joints.

After she retired, Spierer used that talent to make needlepoint art.

She was particularly impressed with how grand the Hebrew Home had become since she had last been there in 1979, calling it the dream of a genius coming true. That genius, Spierer said, was Jacob Reingold, one of the early leaders of the Hebrew Home who died in 1999.

Spierer’s speech itself didn’t too many actual words of inspiration, but then again, it didn‘t have to. Instead, merely the sight of Spierer so tested by life and time sitting and speaking passionately about not just her own life, but the world around her, was likely inspiration enough for many of those in attendance.