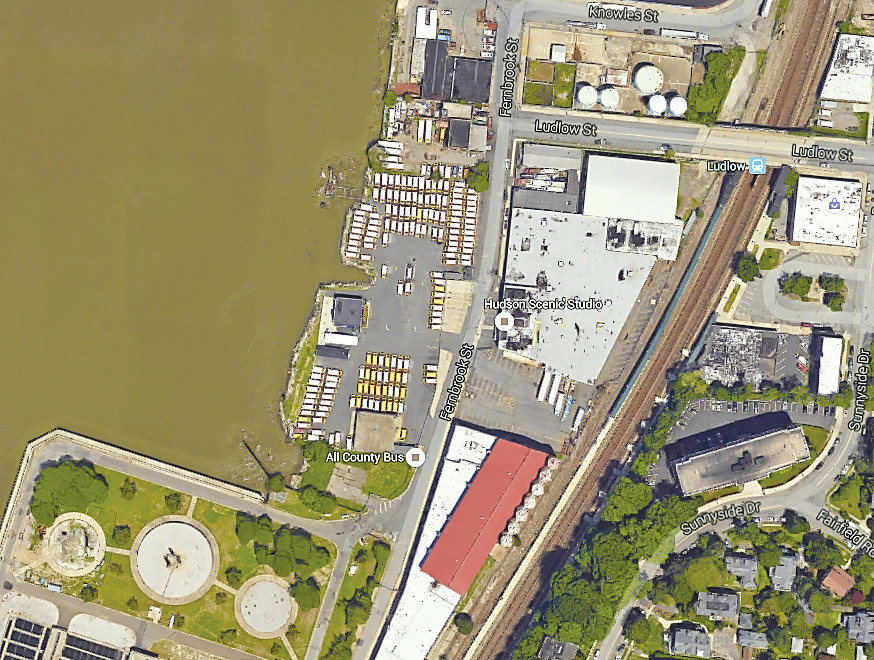 The Yonkers bus depot where the company HeliNY wants to build a helipad for tours to the Statue of Liberty.
Screengrab from Google Maps
By Anthony Capote

Local elected officials are calling on Yonkers authorities to oppose a tour company’s plans to build a heliport just north of Riverdale.

If approved by Yonkers authorities, the company would send a constant stream of flights to the Statue of Liberty all day, every day — flying right over the northwest Bronx.

The local politicians’ letter to Roman Kozicky, the chairman of the Yonkers planning board, voiced concerns about noise and air pollution.

“It is extremely inappropriate for a heliport to be built at that location. HeliNY’s plan offers no benefits to the local Yonkers or Bronx communities, and their heliport would be a blight on the beautiful riverfront land that we share,” the letter stated. “As representatives for the region, we strongly urge the Yonkers City Planning Board to join us in opposition to HeliNY’s proposal, as we feel it be best for both the northwest Bronx and Yonkers communities.”

Activists from the group Jews for Racial and Economic Justice rallied in front of Mr. Cohen’s office on June 1, seeking his support for legislation that would require police officers to let people know that searches are optional in some cases.

“I think that it is up to the citizens to assert their rights, not for the police to assert it for them,” Mr. Cohen said of the measure, part of the Right to Know Act. “It’s the not the job of police; it’s the job of teachers and elected officials to inform citizens of their rights.”

“The legislation is misguided. I think it would be more guided and more valuable for people to know their rights,” he added.

Mr. Cohen said that he supports two other bills associated with the act. Those would require police to publish data related to use of force online and make use of a chokehold while making an arrest a misdemeanor offense.

Mayor Bill de Blasio allocated $10 million in his executive budget this year for the construction of two new, full-service animal shelters in the Bronx and Queens (see story).

New Yorkers for Clean, Livable and Safe Streets (NYCLASS) had advocated for the shelters. The group was subpoenaed in April as part of a federal probe into Mr. de Blasio’s fundraising activities.

NYCLASS gave hundreds of thousands of dollars to a a campaign opposing then-City Council Speaker Christine Quinn's mayoral run in 2013, according to news sources. They say federal prosecutors are probing whether the donations came in exchange for favors such as Mr. de Blasio's promise to ban horse carriages in Central Park.

Critics of NYCLASS leaders Wendy Neu and Steve Nislick say they support the ban because they want to develop land where the horses are sheltered. Both have denied the charges.

In an emailed statement, a NYCLASS spokesperson declined to comment on the state of the investigation.

“We were asked for some records as a cooperating witness and are happy to comply,” the email read.

This year’s primaries for the state legislature do not take place until Sept. 13, meaning if someone loses the congressional primary on June 28, state office is still an option.

Assemblyman Keith Wright said he won’t seek reelection to his current seat if his bid for Congress doesn’t work out, and has endorsed Councilman Inez Dickens to succeed him in Albany. He called on state Sen. Adriano Espaillat, one of his rivals for the 13th congressional seat, to renounce any intentions to the state Senate.

Mr. Espaillat, who fought to keep his Senate seat after losing the congressional race in 2014, said he is completely focused on the June primary. But he shied away from completely ruling out another Senate term.

“I have not ordered any petitions. I am not circulating any petitions,” Mr. Espaillat said in regard to his Senate seat in a Monday phone interview. “I am totally focused on [June] 28, and I expect to win, and when I win, that question will be moot.”

Lights out at BP’s office

Like a number of sites throughout the country, every borough president’s office in the city was lit orange on June 2, National Gun Violence Awareness Day — except in the Bronx.

A Press journalist who saw all four sides of the Bronx County Building last Thursday observed no orange lighting there. A spokesman for Borough President Ruben Diaz, Jr. insisted in a phone call that the building was in fact lit, though when asked for a picture, he sent a link to a 2010 picture of the BP at a gun buyback program.

Mr. Diaz gave a statement on Gun Violence Awareness day saying, “While we are seeing record lows in our borough’s crime rates, one victim of gun violence is still one too many. We must continue to do more.”

Councilman Ydanis Rodriguez  is joining calls for the state legislature to lift the cap on the number of speed traffic cameras in New York City.

The proposal, from Councilman Jimmy Van Bramer, asked Albany to allow the City Council to place more cameras, which can result in $50 fines but no points on drivers’ records, throughout city streets.

“Cameras have proven successful at lowering driver speeds wherever they’re placed,” Mr. Rodriguez, whose Upper Manhattan district includes part of Marble Hill, said in a statement. “As the father of two daughters, I see it as an imperative that our leaders in Albany heed the message of safety and move to protect our most vulnerable New Yorkers.”

In 2014, the city’s Department of Transportation said they increased the number of traffic cameras near the Robert J. Christen School (P.S. 81) in order to reduce traffic on Riverdale Avenue near the intersection with West 256th Street. But the DOT said in an email it could not divulge the current location of any traffic cameras.

“Our policy is to not identify speed cameras locations, in order to maintain the program’s deterrent effect throughout the City,” a spokesperson stated.

“However, the speed camera program has been effective at deterring speeding within Riverdale, as violations for speeding have dropped by 56 percent in the area since its installation in September of 2015.”

A previous version of this article incorrectly stated that the mayor’s executive budget included funds for New Yorkers for Clean, Livable and Safe Streets to build new animal shelters in the Bronx and Queens. In fact, the budget does not specify who will build the facilities and NYCLASS’ only role in the process so far has been advocating for the shelters. Further, the article misstated that NYCLASS donated directly to Bill de Blasio’s 2013 mayoral campaign. It also misstated that NYCLASS was reported to have had plans to develop land where stables for Central Park’s horse carriages sit.