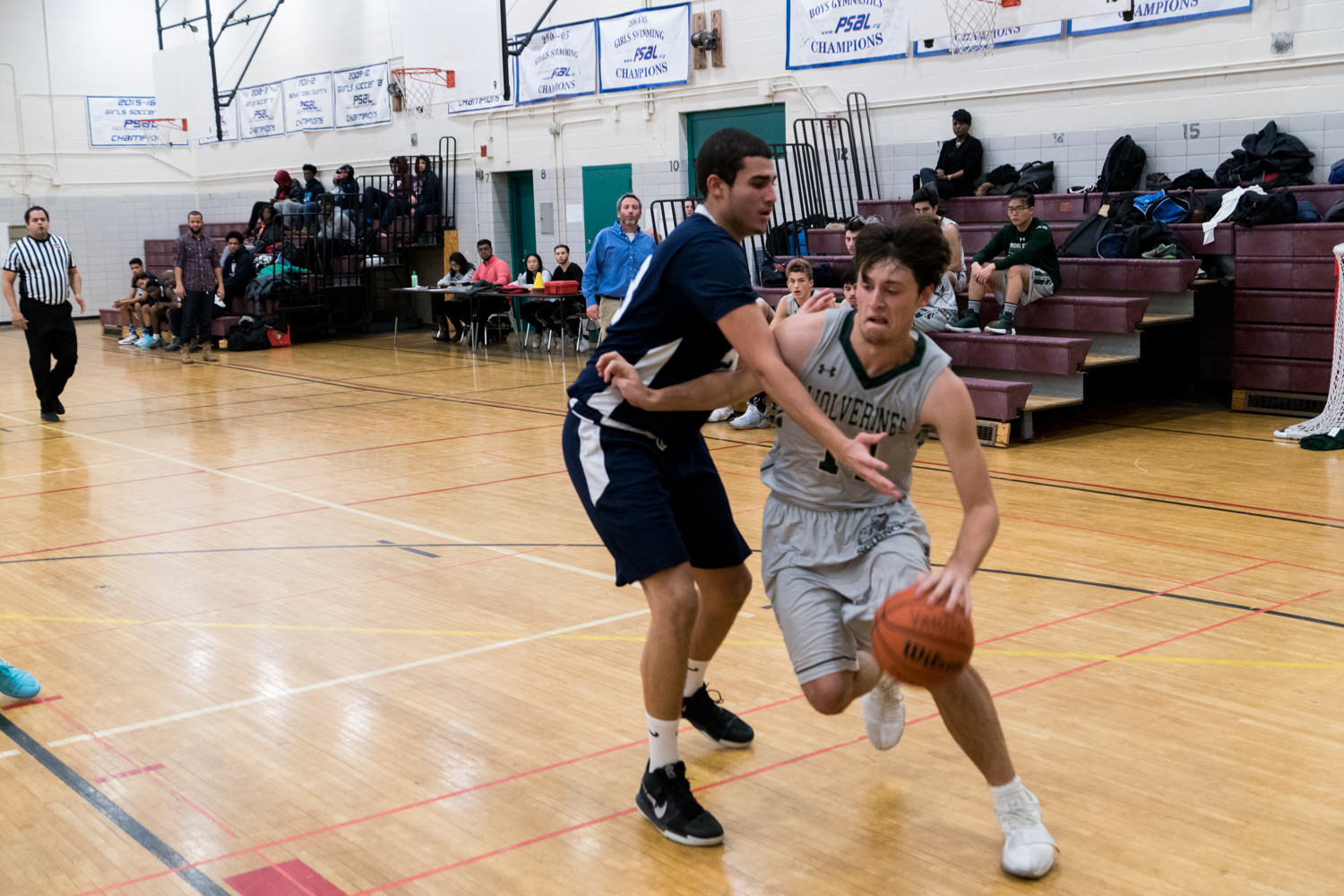 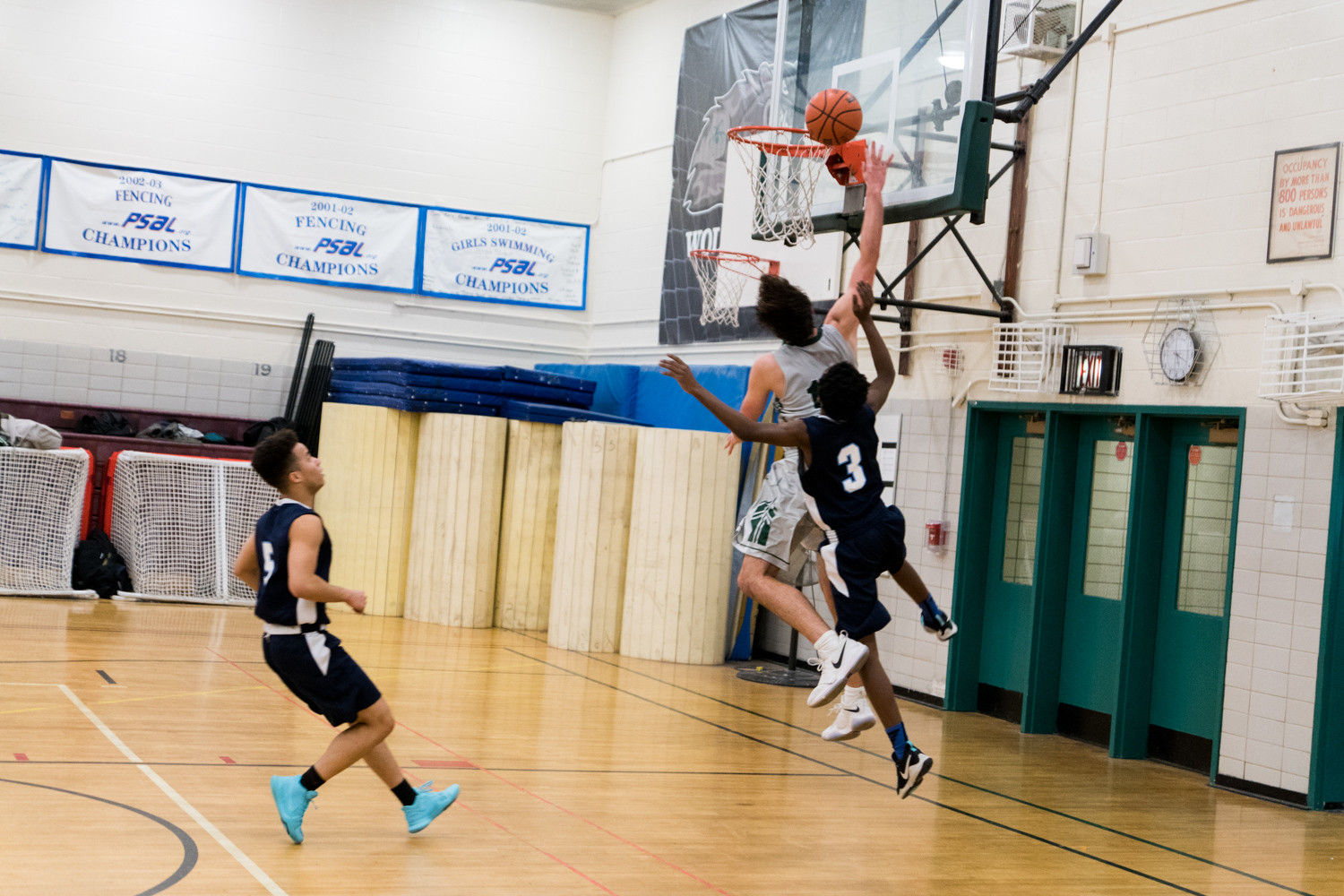 Bronx Science senior Teddy Lowen drops in two of his team-high 17 points in the Wolverines’ victory over Walton.
JULIUS CONSANTINE MOTAL
Previous Next
By SEAN BRENNAN

Barton Allen was looking for a spark, something that would jolt the Bronx Science boys basketball program out of its collective funk that resulted in a 4-13 campaign a year ago.

He wasn’t sure what he was looking for until he saw Alex Halpern practicing with the school’s junior varsity program back in the fall.

“I’m usually in the habit of keeping freshmen down on J.V.,” Allen said. “But I said, ‘You know what? This year I want them coached a certain way, and I want them playing a certain way.’ And they have added a lot of competitiveness to the team.”

Halpern played at a level beyond his 14 years, knocking down a pair of clutch three-pointers inside the final five minutes of the game, then dishing off a perfect no-look pass which resulted in a layup by Science’s Sebastian Torres with 2:22 left in the fourth quarter. That helped break open a tight game as Science pulled out a 55-46 victory over Walton Monday night.

The win boosted Science’s record to 8-1, helping the Wolverines rebound from their lone loss last Friday at Lehman. Bronx Science now has doubled the wins it had all of last season.

“I think this year the chemistry is a lot better and the freshmen have added a kind of competitiveness to the whole team in the sense that no one’s playing time is guaranteed,” Allen said. “These guys have to produce this year, especially on the senior and junior level. If you’re not producing then I’m going with other guys.

“From the beginning of the season I stressed that a lot to the point where I think they got it, and the chemistry has gotten better.”

One positive that has carried over from last season is the play of Teddy Lowen. The senior forward, who is averaging 20 points and 15 rebounds this season, was dominant once again, scoring 10 of Science’s first 13 points, and finishing with a game-high 17.

Allen has made it a point to make Lowen a primary focus on offense this season.

“Teddy’s just really good,” Allen said. “Last year we didn’t get the ball to him enough and we didn’t run the offense through him enough. This year we’re running the same offense, but we’re focusing on getting him the ball in good situations and letting him dominate. He’s one of the best players in our division and our league.”

This season is like a breath of fresh air for Lowen compared to last year, and he’s enjoying every minute of his final season with Science.

“I think it’s just the belief we have in each other,” Lowen said. “We trust each other so much more than we did last year. You saw it in this game when our freshman, Alex, really stepped up and hit some really huge shots for us near the end.”

Halpern may have achieved cult status with his performance in this game. Science was trailing 43-42 with 5:30 to play when Halpern bagged a three-ball that gave the Wolverines the lead for good at 45-43. After a layup by Tate McLean, it was Halpern again drilling another three-pointer and the crowd was roaring its approval.

On Science’s next possession, Halpern dropped that no-look pass to Torres, and victory was sealed. Some fans were overheard asking, “Who is this kid?” while others chanted “MVP” as he stepped to the free-throw line in the final seconds.

So in one game, Halpern has gone from virtual unknown in his own school to rock star. So will the Science student body get to know Halpern better in the season’s final month?

“If they come out, yeah,” Halpern said, smiling.

While the student body learns about its new cult hero, Lowen and the rest of the Wolverines have long known what they have in the freshman guard.

“He’s brought hustle,” Lowen said. “Last year we really didn’t have the hustle and the heart, but he brings hustle and heart to every single practice and every single game. He’s made huge contributions for us this year.”