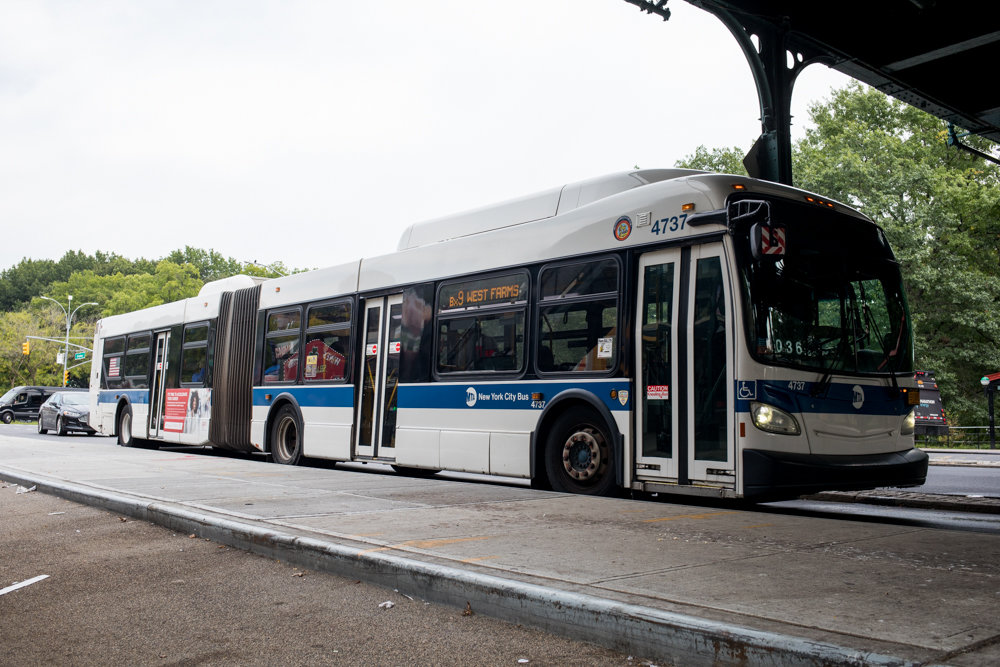 A Bx9 bus picks up passengers at a bus bulb on the southbound side of Broadway near West 242nd Street while a car waits behind it. The city’s transportation department included this feature — which local businesses say is creating traffic nightmares — as part of its overall plan to make this stretch of Broadway more pedestrian-friendly.
JULIUS CONSTANTINE MOTAL 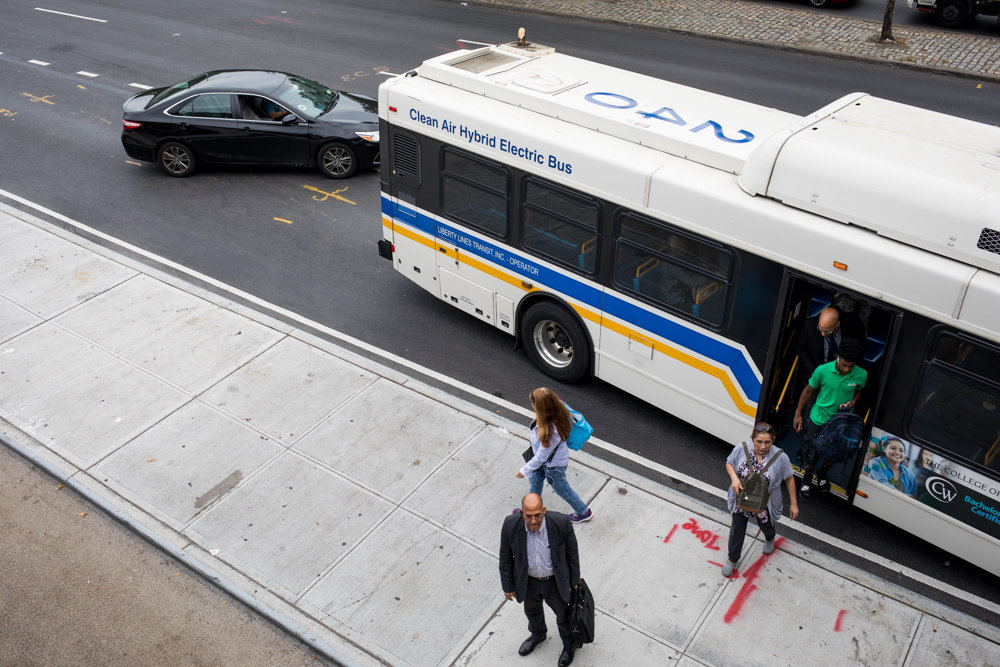 An impatient motorist navigates toward Broadway’s central corridor near West 242nd Street while a Westchester County Bee-Line bus drops off passengers at a bus bulb. This particular feature, recently installed by the city’s transportation department, has caught the ire of local businesses, creating what they describe as backups and other problems with traffic in that area.
JULIUS CONSTANTINE MOTAL 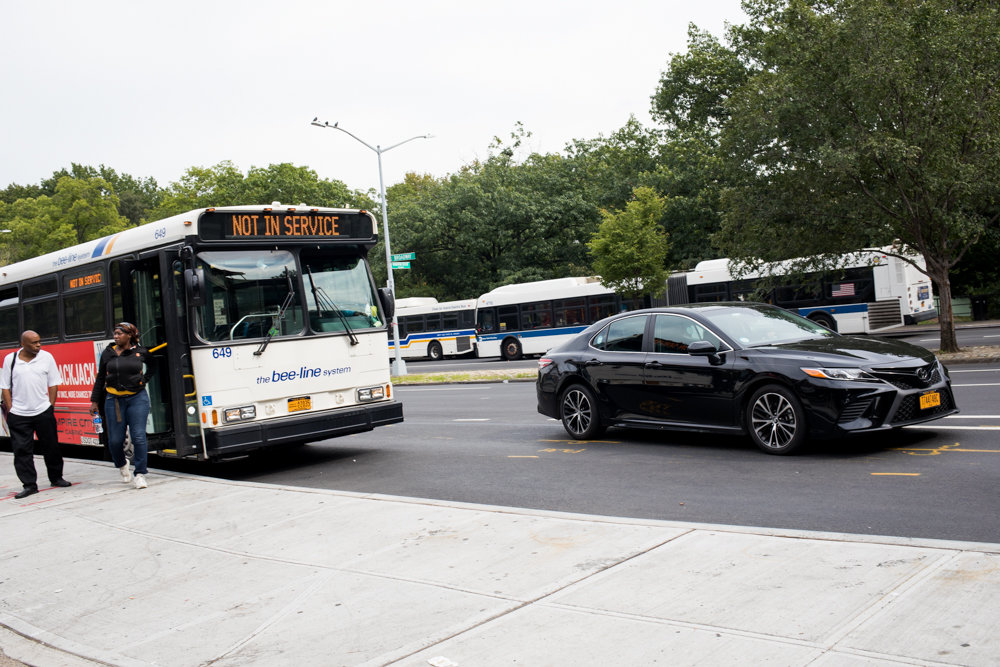 A car loops in front of a Westchester County Bee-Line bus dropping off passengers at a bus bulb located on the southbound side of Broadway near West 242nd Street. The bulb not only has created some problems with traffic, according to some local business owners, but it’s also pulled away much-needed parking.
JULIUS CONSTANTINE MOTAL 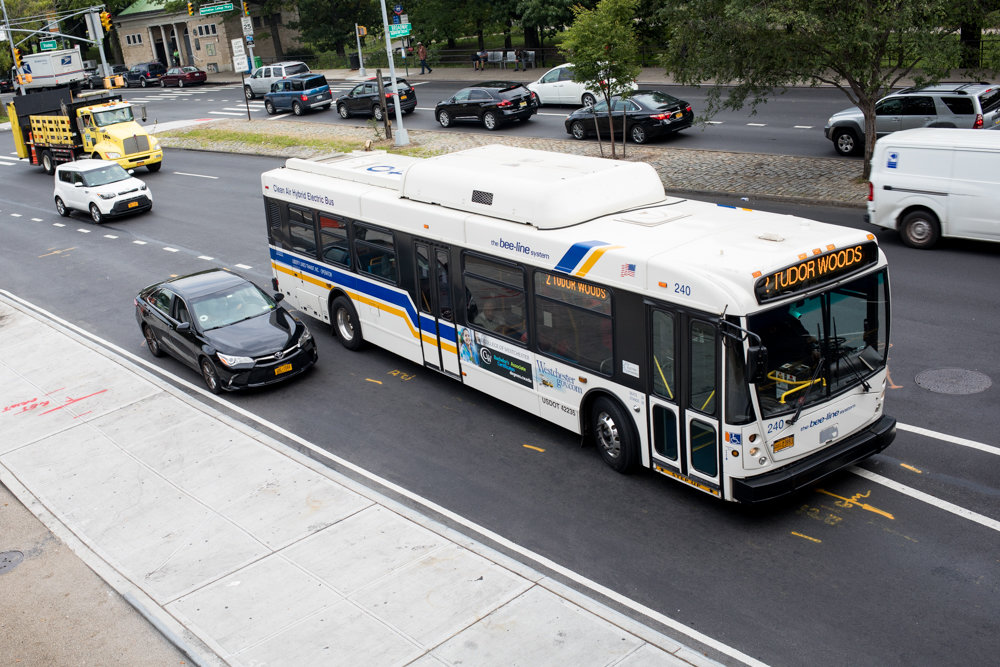 A Bee-Line bus from Westchester County navigates around a stopped car at a bus bulb located on the southbound side of Broadway near West 242nd Street. Nearby merchants have complained about the traffic problems this newly installed bulb causes.
JULIUS CONSTANTINE MOTAL 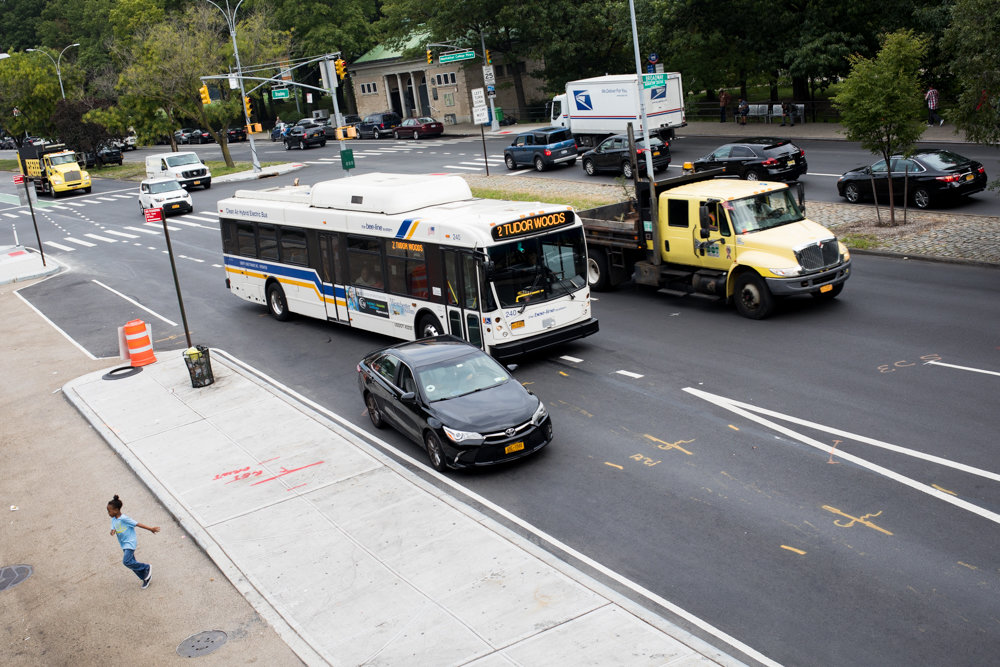 A Bee-Line bus from Westchester County navigates around a stopped car at a bus bulb located on the southbound side of Broadway near West 242nd Street. Nearby merchants have complained about the traffic problems this newly installed bulb causes.
JULIUS CONSTANTINE MOTAL
Previous Next
MTA wants to hear from you

The Metropolitan Transportation Authority opens the floor for straphangers in one of six workshops coming to Christ Church Riverdale on Oct. 18.

The meeting next week runs from 6 to 8 p.m., at the church, located at 5030 Henry Hudson Parkway, focused on the borough-wide bus route redesign for both local and express services.

The plans follow last year’s redesign of Staten Island’s service, and the Bronx — which also has limited cross-borough train options — will follow suit in the coming months.

The MTA already has hosted meetings at Bronx Community Board 12 and Monroe College, among other places, with one more meeting in the borough planned for New York City Health and Hospitals on Oct. 15 on Pelham Parkway South.

Newly installed bus bulbs on West 242nd Street and Broadway are not brightening the day of many businesses in the neighborhood, creating what they describe as problems with traffic, congestion and loss of much-needed parking.

“It sucks,” said Louis Porco, owner of Broadway Joe’s Pizza nearby. “It’s just horrible. It just causes more traffic, and I’m losing business because people can’t stop over here. Traffic is backed up all the time over here.”

The bulbs are part of the transportation department’s revamp of Broadway in the northernmost part of the city, designed to create more pedestrian and cycle-friendly stretches, and to move traffic not only more efficiently, but at safer speeds. The bulbs are nothing more than a curb extension that gives buses the chance to drop off and pick up passengers without impeding traffic.

But, at least to business owners like Porco, it’s already failing.

“It’s just a waste of money and it’s not working out good,” said the owner of the 5985 Broadway pizza joint. “People can’t even double park anymore, it’s just crazy. It’s too much.”

Porco was one of the 28 merchants who opposed DOT’s Broadway corridor plan last year — a plan that was rejected by Community Board 8’s traffic and transportation committee, but implemented by DOT anyway.

“We went to like four or five town meetings and a lot of people were against it,” Porco said. “They just pushed through it anyway because they wanted to make these bike lanes and that’s it. They had an agenda and they wanted to do what they wanted to do, and it didn’t change a single thing. I was like, why did we go to all of these meetings if you guys are not even listening to us?”

The bulbs, however, help create a safer stretch of road for everyone finding their way to Broadway, according to DOT spokeswoman Lolita Avila.

“It provides more room for people to wait, more efficient bus operations, and allows riders — especially those using wheelchairs — to safely exit the bus,” she said.

And safety was a major motivating factor behind the plan. Before the redesign, nearly every car coming in and out of Yonkers treated the North Riverdale stretch of Broadway like a racetrack, DOT officials said last year. Making things worse were long crosswalks across multiple travel lanes that created dangerous environments for anyone trying to get to and from Van Cortlandt Park on the east side of Broadway.

Between 2012 and 2016, more than 10 people — primarily pedestrians and one cyclist — were injured or killed on Broadway between West 242nd and Caryl Avenue, DOT said.

Avila, however, said she understands the frustration some might have over the changes.

“As with most projects, we understand that it takes time for commuters and motorists to adjust to the new street designs,” she said. “We will continue to monitor the service and are open to modifying plans as needed.”

Some of those adjustments might need to include forcing buses to use the bulbs the way they were intended. CB8, for example, has received complaints that buses are jumping into the “express” lane to drop off passengers — a move that not only is dangerous for those passengers, but can snarl traffic.

The bus bulb, at least according to traffic and transportation chair Dan Padernacht, was a bad idea from its inception.

“We knew it was going to create dangerous conditions, which is exactly what is happening now,” he said.

Buses that are using the bulb are bunching up and blocking traffic on the west side of Broadway, according to Mohamed Asraf, who manages the Dunkin’ Donuts at 5987 Broadway. Even worse, while the bulb is intended only for buses, it’s becoming a standing point for taxi drivers waiting for fares or police cars simply camping out there.

CB8 isn’t standing by. Sergio Villaverde proposed a resolution at his recent economic development committee meeting to implore DOT and elected officials reconvene and review what’s happening on Broadway. Businesses dependent on deliveries cannot get drivers to the sidewalk, Villaverde said, which is one of a number of issues these stores are having with the changes.

“We’re hoping that the city has an open mind and the DOT looks at the feedback and people look and see that this is a mistake,” Villaverde said. “That pride should not be in the way of doing what is right for the merchants.”