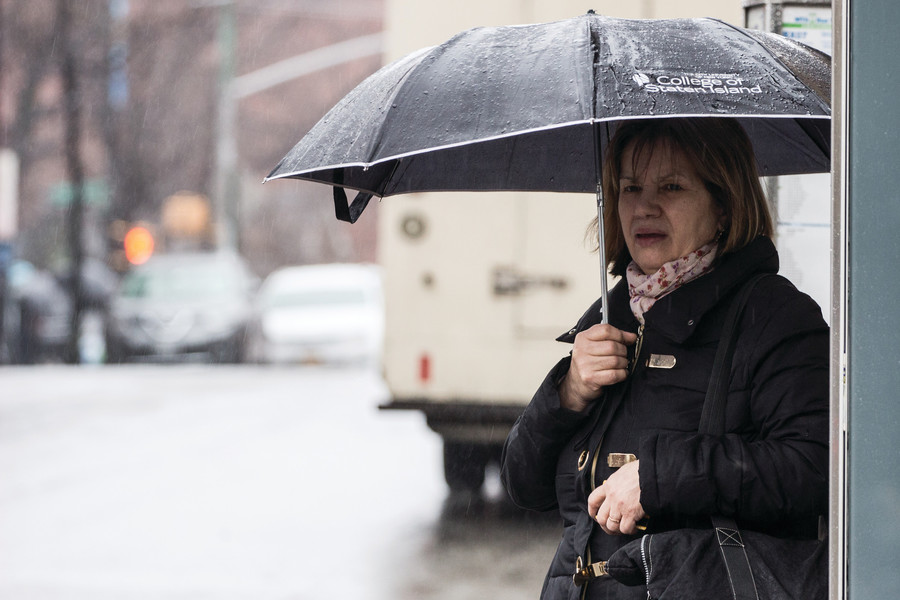 A woman waits in the rain for a bus. Nearly 70 government officials have joined forces to push Gov. Andrew Cuomo to make much-needed improvements to the city’s transit system.
Aaron Mayorga
By Alexandra Hutzler

Last Thursday morning, Sal and Maureen Moscato waited more than 20 minutes in 90-degree heat for the Bx7 on the corner of West 259th Street and Riverdale Avenue.

The elderly couple has used the city’s bus system for more than 18 years, and as Sal wiped the sweat from his brow, described the service that day as “terrible.” Sadly, they are just two riders out of many who feel this way.

Dissatisfaction and a decrease in ridership has caused the Bus Turnaround Coalition — an advocacy group of New Yorkers determined to “turn around” poor bus service — to join with government officials demanding Gov. Andrew Cuomo do more to improve the system.

The Bus Turnaround Coalition identified the top 10 routes that need improvement this year based on large disparities between travel times during peak and off-peak hours. Among the list are six lines located in the Bronx, including the Bx9.

In a May 18 letter, 67 elected officials — including Assemblyman Jeff Dinowitz, and state senators Daniel Squadron and Marisol Alcantara — called on Cuomo to direct the Metropolitan Transportation Authority to commit to what they described as two inexpensive solutions to the ailing bus service.

The first proposal is a transit signal priority network, allowing buses to manipulate traffic lights to remain green. While the tool already exists and has proven to be successful in select service routes, the MTA only uses it on a handful of buses throughout the five boroughs.

The second solution is all-door boarding, allowing riders to enter through either the front or back door using electronic payment methods. It’s a move the leaders said would greatly minimize the time needed for passengers to board the bus.

“We think both of them can be implemented relatively easily and quickly,” Dinowitz said. “We want to start to see changes now. We don’t want to wait for five years. People are very frustrated by what they consider bad bus service.”

The letter was released just three days after the MTA outlined a similar six-point plan to restructure management and modernize technology on subways to decrease delays.

Dinowitz, chair of the Assembly’s committee on corporations, authorities and commissions — which oversees the MTA — circulated the letter inside the Assembly.

Barbara Haimowitz lived in Riverdale for 18 years before moving further into the city last year. One of the reasons for the move was that her children, who attended school in Manhattan, were waiting for buses late at night after extracurricular activities.

Worried about her kids standing on the street after 11 p.m., Haimowitz often drove to pick them up just before midnight.

“I would say that parents with kids in school have a big burden in terms of their commuting,” Haimowitz said.

They suggest the MTA properly space buses to eliminate “bunching,” where a bus that might be on schedule catches up to a bus that’s running late. Bunching, in many cases, creates long waiting gaps for riders at bus stops.

Another difficulty for the couple is that buses do not always do their best to accommodate elderly passengers.

“The problem is we’re disabled,” Maureen said. “Getting them to pull into the curbs is a big problem.”

City officials already are butting heads with the governor over a $65 million cut to MTA funding in Cuomo’s executive budget. The Assembly could not convince Cuomo to restore the funds, but they did put in an equal amount of money in different budget additions toward improving MTA services.

So far there has been no response by the governor’s office to the letter.