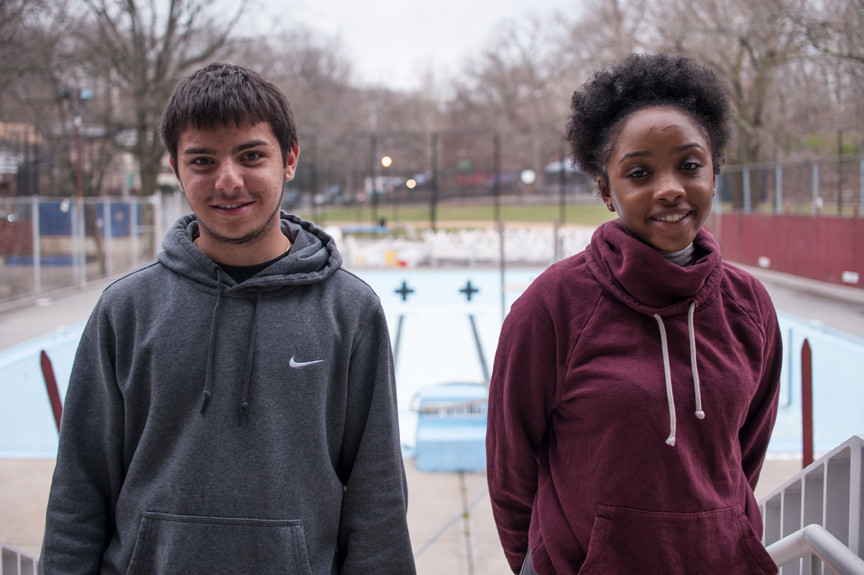 Jamira Rogers is a no-nonsense senior at Advanced Math & Science, one of the New Visions Charter High Schools on the JFK campus. Marc Reyes is a soft-spoken junior at the David A. Stein Riverdale/Kingsbridge Academy. One thing they have in common is love of working at the Riverdale Neighborhood House (RNH), which recently named them its Teens of the Year.

“I’m not going to lie. At first, when I learned about it in my school, it was basically like, I wanted some money,” said Jamira. “But I’m so glad I ended up here.”

Since starting as an intern at RNH’s Teen Center last summer, Jamira has excelled at planning and holding events for other local young people.

“She really took ownership of her role and started being more engaging and helpful,” said RNH’s Intern Coordinator Phoebe Downes. “There’s been an improvement and it’s been great to see that.”

Jamira and Marc are among a small group of students who help all aspects of events at the Teen Center, a shiny facility featuring a pool that opened last summer. They said a highlight of last year was a party for alumni of RNH’s internship program, which offers education and environment routes in addition to the event planning internships.

Once Jamira and Marc get other students to attend events like a recent karaoke night, perhaps the biggest challenge is keeping their peers off their phones. Jamira said the trick is putting newcomers at ease.

She and Marc shared a sense of pride over helping make RNH’s events a success.

“When you get the objective finished, it feels great,” Marc said. “You’re like oh, I brought more people here and it became a bigger place for everyone to come and have fun.”

Ms. Downes said of Marc, “He might not, when you first meet him, seem so determined and devoted, but he is actually a very strong person.

RNH honored Jamira and Marc at a ceremony in January. Local elected officials were among the attendees who piled plaudits on the duo.

“I didn’t expect it to be anything, really,” Jamira said. “But when I came to the actual event I was like, wow, I’m a big deal now.”

Jamira said she will call on the experience as she considers a career in law, noting, “something else that really inspires me is interior design — a little side thing.” She has her sights set on community college in Herkimer, New York, then Howard University in Washington, D.C.

Marc is still mulling his plans for after graduation. He said engineering has begun to appeal to him.

But for now, he intends to keep doing his thing at RNH.

Once upon a time, a home was found in Fieldston