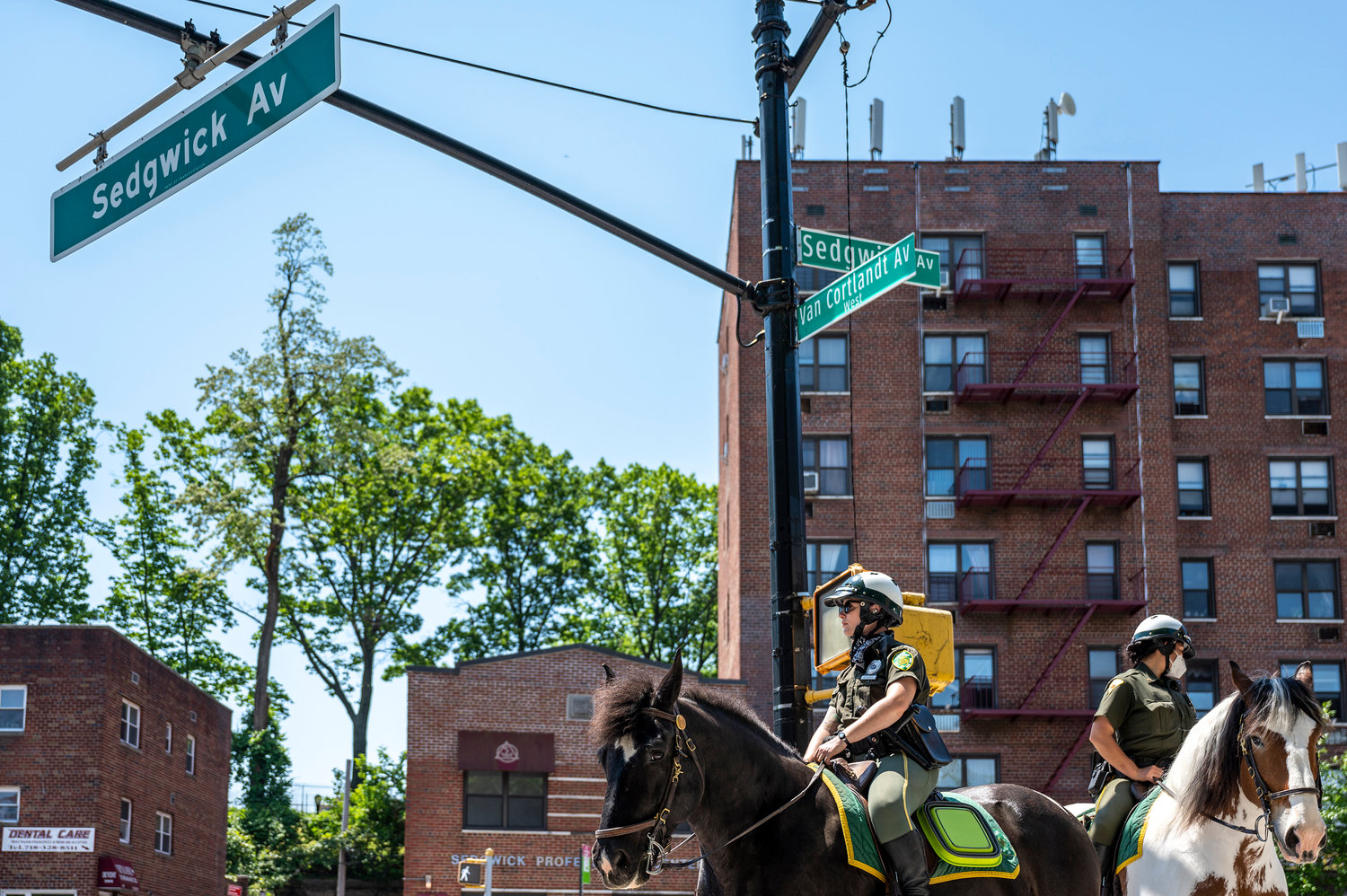 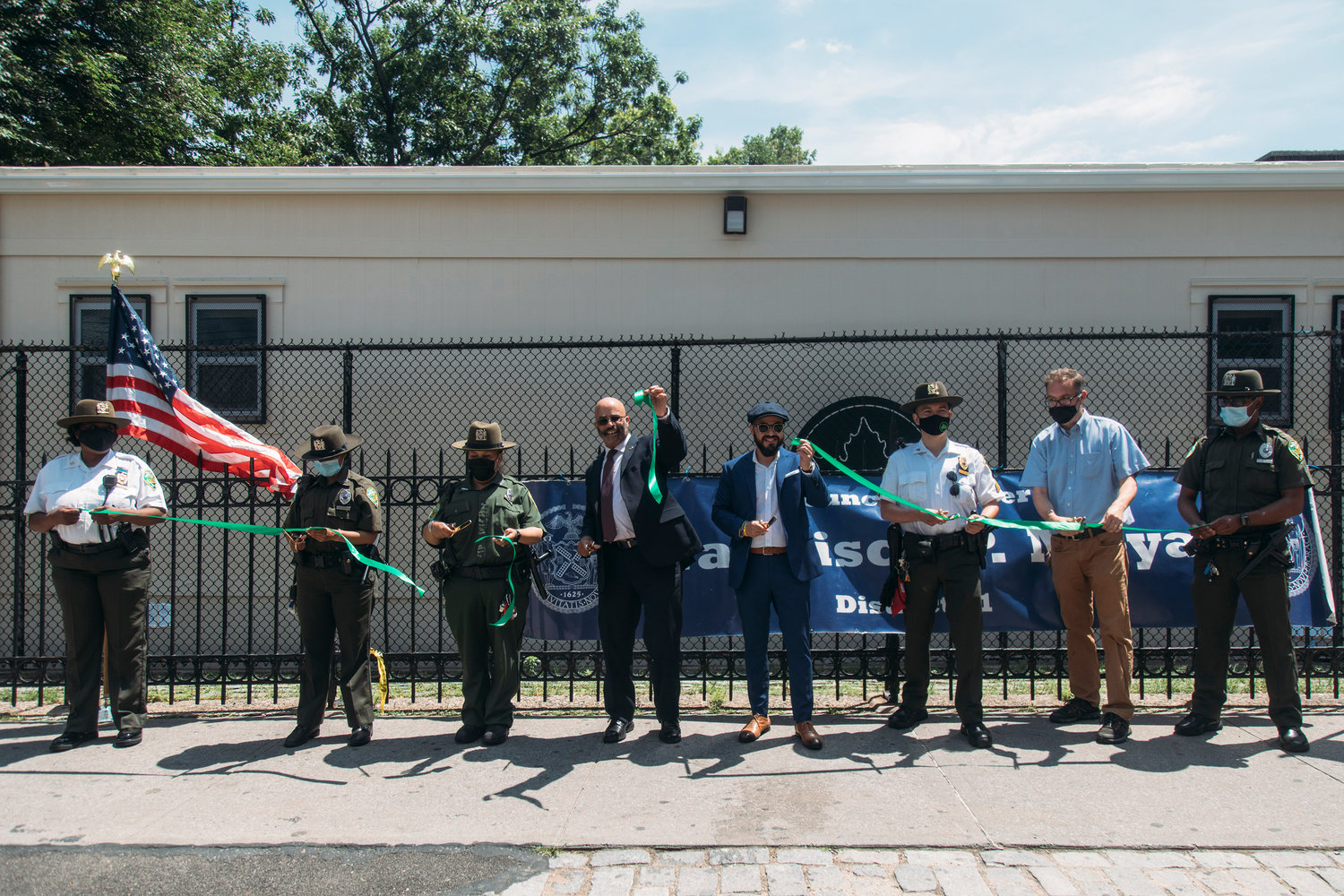 PEP command cannot make arrests, and doesn’t have holding cells. They need to drive the suspect to the 50th Precinct to process arrests. They are also not in 24-hour operations as they work in shifts that end at 11 p.m., when the NYPD takes over.

Community Board 8 plans on reaching out to its neighboring community boards to press the New York city parks department for more law enforcement within Van Cortlandt Park, the third largest city park.

Compared to Central and Prospect parks, which is smaller than Vannie, the northwest Bronx park does not have its own park police presence. Instead, it relies on the 50th Precinct that covers sections of greater Riverdale.

In a letter to a division of Parks Enforcement Patrol, Urban Park Services, and public programs in late October, Councilman Eric Dinowitz and Assemblyman Jeffrey Dinowitz wrote: the 50th Precinct is in the perimeter of the park. However, patrolling the eastern side of it is fundamentally challenging because it’ intersected by two highways.

In support of this letter, CB8 chair Laura Spalter and park and recreation committee chair Deb Travis sent a similar letter. However, they requested specific PEP commands within Vannie and added incident details to support their request within the 20 parks in CB8.

“We’re geographically distant from most of the rest of the Bronx, and we account for a large portion of the violation of park rules,” Travis said.

Van Cortlandt is not wholly left without protection as the park has a dedicated mounted unit. In addition, the park is home to the Urban Park rangers, who are sworn New York state peace officers.

Park rangers in Vannie primarily focus on education while running the nature center and conduct programming on the trails, such as bird watching. They can also issue a summons if warranted.

They’re in the park seven days a week predominantly between 8 a.m. and 5 p.m.

The Bronx alone has four dedicated PEP commands with a day-to-day focus on providing safety and security to all parks. However, their shifts end at 11 p.m., and they help teach visitors park rules and regulations. They can issue summons and direct individuals to the 50th Precinct.

“The number of PEP officers in the Bronx is shocking,” said Stephanie Ehrlich, executive director of Van Cortlandt Park Alliance.

Commanding Capt. Juan Bayron and Capt. Domingo Sanchez explained the challenges of traveling through the Bronx and arriving at different parks while each command has 10 to 12 officers per shift and 51 in total in the Bronx.

“You need to think, there’s two shifts per day, seven days a week, that doesn’t leave a lot of PEP officers in any one park, let alone Van Cortlandt park, which is huge,” Ehrlich said.

In recent incidents, there were shootings in the Allen Shandler recreation area and a recent stabbing on the Broadway side at the Mobil station, an attack on staff and threats to visitors.

“In a perfect world, I would like to have NYPD and PEP to be right here in Van Cortlandt Park,” said Capt. Sanchez.

While working in Central Park for eight years, Sanchez recalled his job as a PEP officer as less stressful by having both NYPD and PEP inside a park.

After January 2020, in CB8, there were 20,800 party complaints and within Van Cortlandt Park and nine complaints of loud music. Dealing with complaints does not take a short time because PEP often needs to have a long discussion with the argumentative person.

Bayron’s command has seven officers and three supervisors, and all work within an 8-hour shift.

The executive director said that starting with a new command in Vannie would be a great place to start. The CB8 is requesting 10 officers in command within the park. This would provide weekly coverage from 6 a.m. to 11 p.m. and reduce response time by at least 20 minutes.

The department needs help retaining its employees and preventing them from moving to other agencies, such as NYPD or sanitation. Some reasons the PEP captains gave were better salaries and benefits.

However, during a CB8 meeting in early December, no additional information was given on the request.

Eventually, Spalter and Travis received a reply from the parks department.

“The establishment of a dedicated PEP command at Van Cortlandt Park is something that we are unable to commit to in the immediate future,” said Edwin Rodriquez, the parks and recreation assistant commissioner. “We are dedicated to supporting the park with all the resources and partnerships that we currently must keep the community safe.”

Travis said the parks department thinks two mounted officers and the ranger are adequate. But, she told The Riverdale Press, that is not the case.

The Assemblyman was disappointed by the “negative response” but appreciated the park’s fast reply, and the reality that this request comes with a price. Yet he claimed he is not surprised the parks department didn’t comply because the Bronx does not get a fair share of resources as other parks in the city.

Jessenia Aponte, the newly appointed Bronx borough parks commissioner, declined to answer whether or not it is a financial issue.

If the parks department would add 10 PEP command officers within the park, they would need an office for paperwork when they issue a summons, a men’s and woman’s locker room for their equipment, a private bathroom, and a break room. City money would need to be put into this, as it will be a significant capital project, according to a recent CB8 park committee meeting discussion.

Capt. Bayron says there is currently no space for a needed facility in Vannie. And councilman Dinowitz did not comment on what kind of city funds will be required.

“We are working to ensure that park visitors, people from all ages and backgrounds have a safe pleasant experience in this (Vannie) beautiful space,” councilman Dinowitz said.

“I think everybody recognizes the immense benefits that a dedicated command post would yield in terms of improved park safety throughout all parks in the northern and western Bronx,” Assemblyman Dinowitz said. “I will continue to push hard alongside my colleagues and members of our community to get this done. I look forward to a continue dialogue with the parks department as we enter the new year.

Travis suggested the CB8 pass a resolution to align a PEP command with their budget priorities. She suggests using that resolution and showing it to other community boards surrounding the park, such as CB11 and CB7 to encourage them to do the same.

“We’re willing to be flexible,” Travis said. “We just need something in place because we need to have people on the trails so that we don’t have motorcycles and ATVs tearing up the northwest forest or tearing up Riverdale Park and damaging property. We all worked very hard to get that get the parks in the conditions that they’re in.”