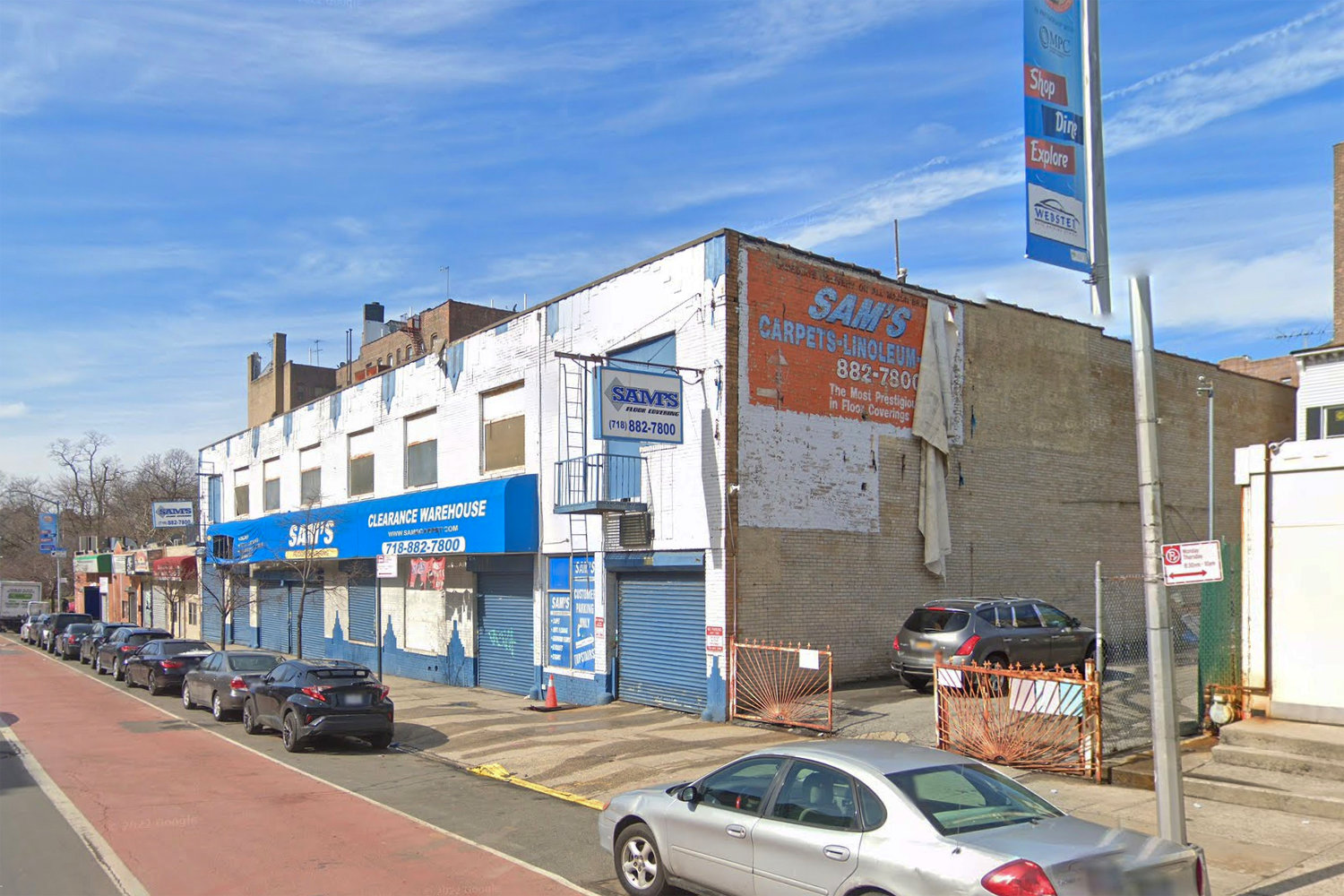 Permits filed in December reveal plans to replace the 2-story warehouse at 3041 Webster Ave. with a 136-unit affordable housing mixed-used development. Peter Fine purchased the property in 2020 for $6.4 million.
Courtesy of Google Maps
By Abigail Nehring

Permits for a new 11-story mixed-use affordable housing development were filed in December at 3041 Webster Ave., a 15,000-square-foot lot four blocks from the 205th St. stop on the D train in Norwood.

Commercial properties and multi-family walk-ups alternately line the avenue. This stretch of Webster Avenue has been designated an inclusionary housing area where the city promotes development proposals that create permanent, affordable housing.

Five other sites within three blocks of 3041 Webster Ave. have been developed as inclusionary housing projects to date, as shown in New York City planning maps.

The area abuts the New York Botanical Garden and extends further south on the other side of Mosholu Parkway. It’s a 26-minute ride to Grand Central Station from the Botanical Garden on Metro-North.

The lot is currently occupied by a two-story warehouse built in 1930, formerly the base of operations of Sam’s Floor Covering until the family-owned business relocated to Yonkers four years ago.

The property sold in March 2020 for $6.4 million to a New York LLC headed by Peter Fine, a co-founder of the real estate firm, Atlantic Development Group. The 30-year-old company oversees a portfolio of properties in the Bronx and Manhattan with a focus on managing subsidized housing projects.

Fine has also made a name for himself through his secondary career on Broadway. Most notably, he was the producer of the 2008 production of Lin-Manuel Miranda’s musical, “In the Heights.”

Fine is listed as the property owner in the construction permits filed last month.

The designs for the 114-foot tall building were drawn up by architect Davis Gross of GF55 Partners. It will contain just more than 44,000 square feet of residential space divided into 136 residential units, plus another 40,000 square feet opening onto the street for community facilities.

Permits for the demolition of the existing warehouse were filed Dec. 23, but have not yet been approved.

Home prices in Riverdale dipped ever so slightly in the fourth quarter of 2022 compared to a year ago, according to Douglas Elliman’s latest market report, prepared by appraiser Samuel Miller. The median sales price in Riverdale was $355,000, down 2.7 percent from last year, but still above pre-pandemic levels.

The average sales price in Riverdale saw a more modest annual decline of 1.8 percent to end the quarter at $497,608.

The figures include co-ops, condos, and 1-to-3-family home sales in Fieldston, Hudson Hill, North Riverdale, and Spuyten Duyvil. There were 111 closings across these neighborhoods during the fourth quarter, down 24.5 percent from 147 closings in the fourth quarter of 2021.

The quarterly average months of supply over the last 20 years is 5.7 months – a useful reality check.

Cooling demand and declining listing inventory are reshaping the Riverdale market, Miller writes. He predicts the downward pressure on local home prices will be “modest” as inventory declines in tandem.

The entry threshold for Riverdale’s luxury market has now declined annually for two consecutive quarters, dipping below $1 million to end the fourth quarter at $995,000.

Is your landlord the
worst of them all?

Former Mayor Bill de Blasio launched the list when he was the city’s Public Advocate more than 10 years ago. The annual ritual of its release, and accompanying maps and tables detailing the worst offenders, has become a highly anticipated year-end event. Its methodology involves ranking rental buildings by the number of housing violations per apartment unit over the past 12 months, weighted according to severity.

Collectively the city’s new 100 worst landlords own 626 rental buildings with an average of more than 69,000 open violations on any given day last year.

But Williams used the occasion this year to focus on advancing Intro 583, a bill he introduced in 2020 as part of the Worst Landlord Accountability Act. That legislation would make it harder for landlords to lie about making repairs in their buildings in order to erase housing violation records maintained by the city’s housing preservation and development department.

“In putting together the Worst Landlord Watchlist, we found far too many instances of landlords failing to live up to their most basic responsibilities of being a steward for the housing of renters who call New York home,” Williams said of the legislation.

Some of the worst offenders have remained on the list for multiple years in a row. One disgruntled owner, Kamran Hakim, sued when he appeared on former Public Advocate Leticia James’s worst landlords list in 2015 and 2016, but his complaint was dismissed.

The New York City Housing Authority meanwhile is in a category of its own. A federal judge placed NYCHA under the watch of a monitor after it failed to fix dangerous conditions in its buildings. But the city doesn’t cite NYCHA for housing violations; rather it tracks a backlog of work orders in NYCHA buildings. More than 680,000 are currently open according to data updated last month.

Other repeat offenders move up and down the ranks while seeming to suffer little blowback, like Abdul Khan and Michael Niamonitakis, who both ranked among the top five worst landlords in 2021 and were still in the top 100 this year.

The city’s enforcement of housing standards is so porous in part because landlords can simply self-certify corrections to violations like broken heat and hot water, mold, lead, and pests.

“The purpose of this bill is to make sure that the violations landlords receive are not persistently ignored,” Williams said in a housing committee hearing in December. “This will give them a sense of urgency to actually resolve it.”

The legislation would increase penalties for failure to correct housing violations and require landlords to pay an additional penalty of as much as $2,500 if they are caught falsely certifying a correction.

There are some concerns about the implementation of the program as Williams designed it, Santiago said, “but we’re certainly looking forward to having conversations with him about a way to ensure that once we identify repeat offenders, we can take some action to stop them from continuing to do that and get violations closed.”

A few local property owners share the distinct dishonor of making it on the city’s 2022 Worst Landlords List. Their names, along with the watchlisted buildings they own, include:

With an average of 475 open HPD violations, owner Bashkim Celaj is the 81st worst landlord.

With an average of 518 open HPD violations, owner Moshe Piller is the 63rd worst landlord.

With an average of 528 open HPD violations, owner Richard Nussbaum is the 62nd worst landlord.

With an average of 700 open HPD violations, owner Seth Miller is the 33rd worst landlord.

With an average of 815 HPD violations, owner Michael Rooney is the 20th worst landlord.