Permits filed, but shelter contract? No dice yet 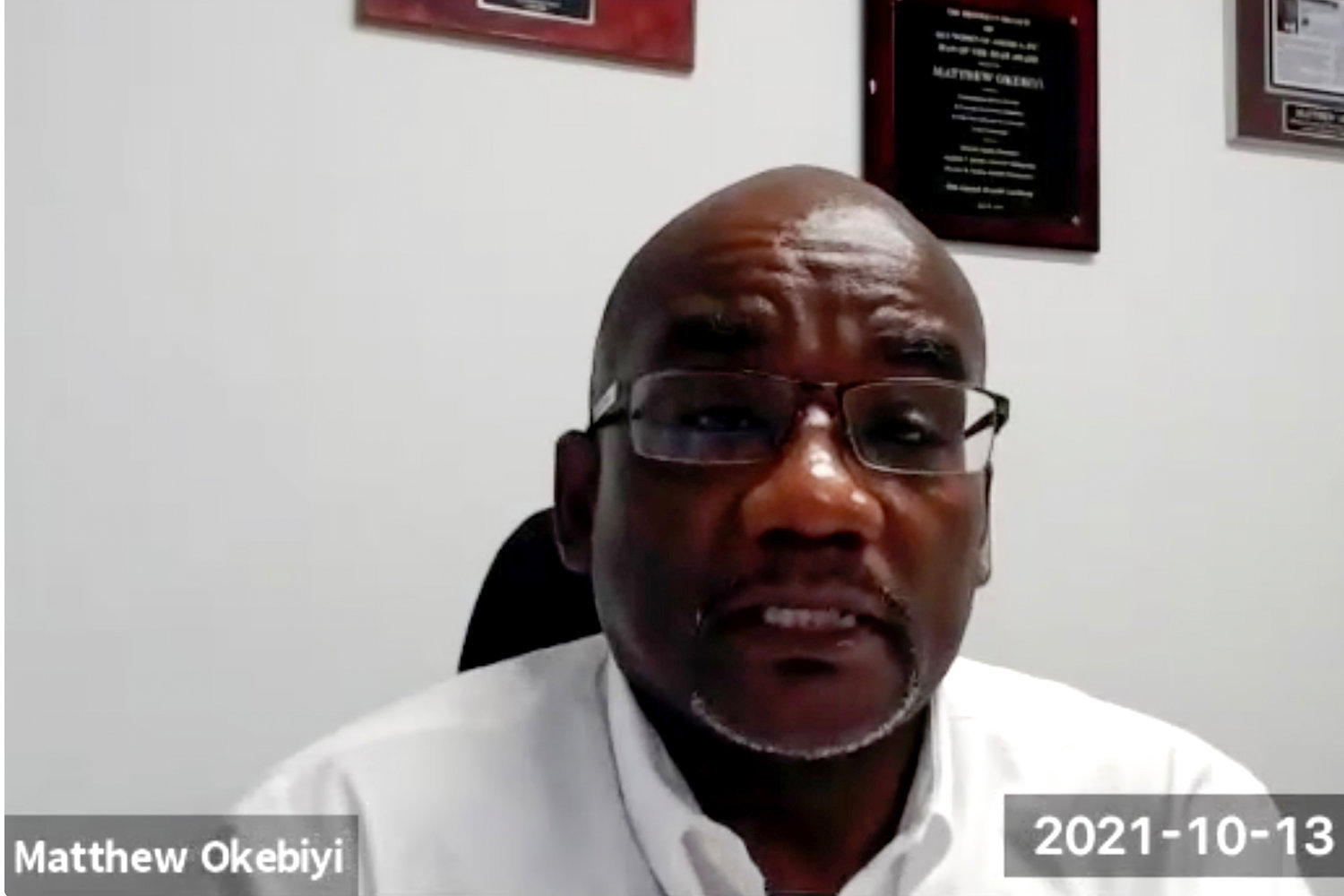 Matthew Okebiyi is the founder and chief executive of the African American Planning Commission Inc. — the nonprofit shelter operator bidding for a city contract to operate a men’s homeless shelter at 6661 Broadway, where construction permits were filed last week.
Courtesy of NYC Bronx Community 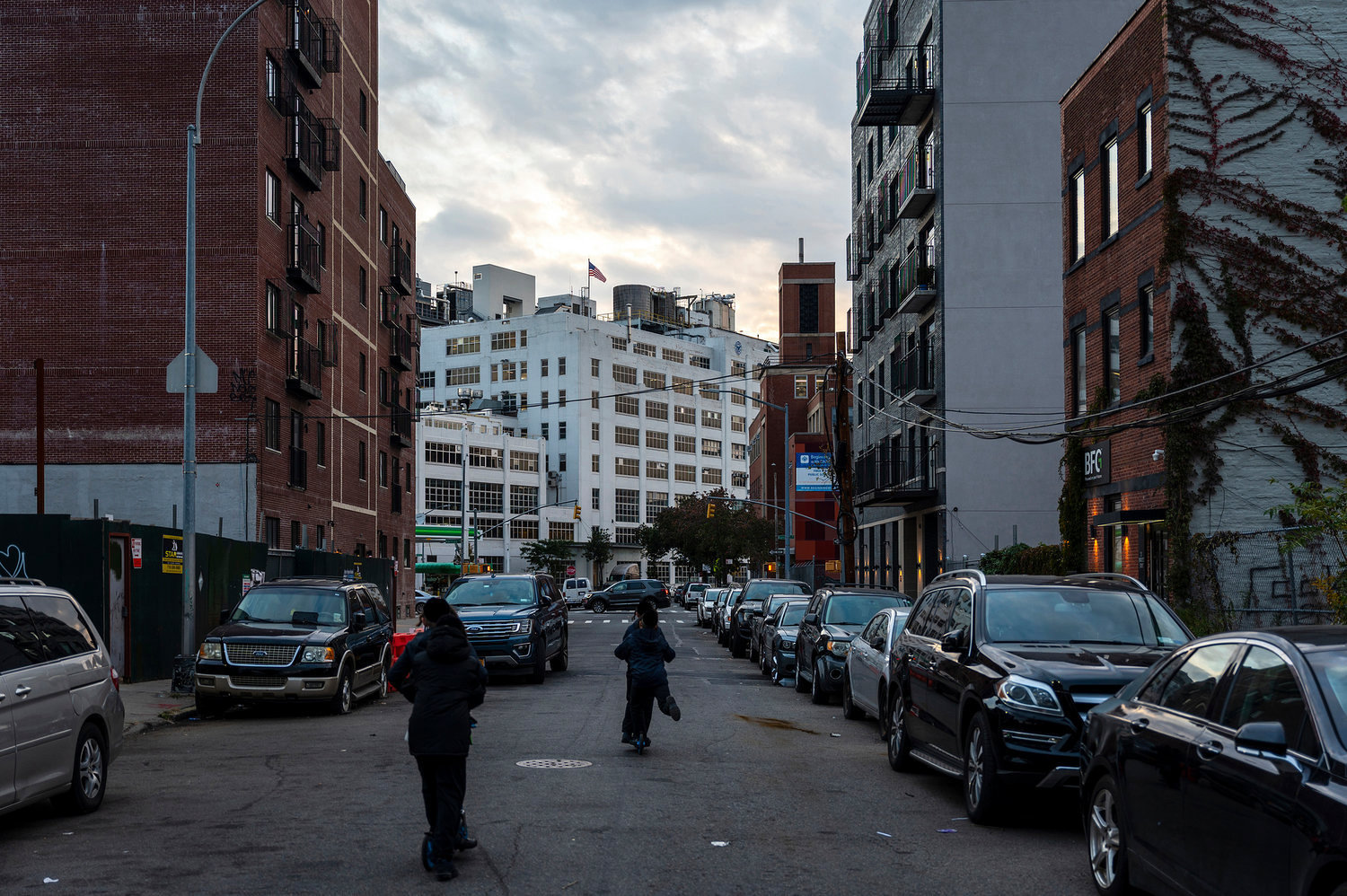 The Flushing Avenue headquarters of African American Planning Commission Inc., a Brooklyn-based non-profit providing homeless services across the city. Social services officials have continued to pursue new contracts with AAPCI, including the new shelter pending approval in North Riverdale, even as a troubling pattern of nepotism emerged in the non-profit’s leadership.
Hiram Alejandro Durán
Previous Next
New York's right to shelter

In remarks last month, Mayor Eric Adams suggested the city should reassess the right-to-shelter precedent set in 1979 before a press secretary stepped in and rolled back his comments.

The 84,000-square-foot tent camp erected on Randall’s Island definitely doesn’t meet the standards set out in the city’s right-to-shelter mandate, but it does divert asylum seekers arriving from the southern border away from shelter intake centers.

The mayor has meanwhile directed homeless services to resume leasing hotel space across the city and called for agencies to collaborate on new emergency relief centers with satellite sites in every borough.

Intro 780 calls for commissioners appointed by the mayor, the council speaker, and the borough presidents to gather input from community boards for shelter development before drawing up a plan that the city’s homeless services agency would take as mandate.

The Committee to End Homelessness, a court-appointed monitor of the city’s compliance with right-to-shelter, recommends easing access to housing vouchers to carve out an exit path from the shelter system.

The coalition recommends expanding access to CityFHEPS vouchers for people earning up to 50 percent of the city’s area median income and waiving the work requirement for people on public assistance.

The average stay in city shelters has grown every year since 2018, amounting to significantly longer stays in 2022.

A contract with AAPCI, which is owned by Matthew Okebiyi, has been pending for more than a year as social services awaits “a finished product that is ready for occupancy,” said press secretary Neha Sharma.

Meanwhile, buildings plan examiners have begun to review the permit applications, a spokesperson said Friday, noting that the buildings department “does not play a role in identifying potential new shelter sites.”

Plans drawn up by Manhattan-based RKTB Architects reveal preliminary designs for 28 dormitory-style rooms accommodating 140 people in total, plus a dining room, kitchen, computer lounge, and other multi-purpose rooms. Court Square managing partner David Sjauw, listed as the property owner, did not reply to requests for comment from The Riverdale Press.

CB8 chair Laura Spalter said the latest development was “disappointing, but not a surprise.”

“We have strenuously objected to this process,” Spalter said. “The community never had any opportunity to weigh in on this plan. We were presented with this failing congregate shelter model as a fait accompli.”

The shelter is not popular in North Riverdale, a leafy neighborhood bordering Yonkers, just out of range of the 1 train, which ends at West 242nd Street. When social services officials unveiled the plans last October in a virtual Community Board 8 meeting, more than 400 people tuned in to share their vexations, ranging from fears about crime to plummeting property values, proximity to police, hospitals, and public transportation, and criticism of the dormitory model the city now favors for new shelters and its open-ended procurement process.

Residents haunted by the specter of new homeless neighbors have successfully shut down shelters planned in Chinatown and Pelham Parkway in the Bronx this year, even as the city’s shelter census began climbing from its pandemic low, rents skyrocketed, evictions resumed in housing court, and thousands of asylum seekers began arriving in New York City on buses chartered by the governors of Texas and Florida.

The agency is behind on plans drawn up under former social services commissioner Steven Banks to build 90 new shelters across the city from the ground up by 2023, meanwhile shutting down dilapidated and often dangerous private “cluster” sites. In October last year deputy commissioner Erin Drinkwater told a packed CB8 meeting only 46 of the 90 new shelters had opened. A year later, the number has ticked up to 48.

In siting the new shelters, the city has largely stuck with past trends, concentrating shelters in neighborhoods where they already exist. Community Board 7, Riverdale’s neighbor to the east, contains nine homeless shelters with a combined capacity of 797 people, while CB8 contains just one — the Praxis family shelter at 5731 Broadway. A handful of community districts across the boroughs contain no shelters at all.

In North Riverdale, matters grew more complicated when it came to light that social services officials had quietly put AAPCI on probation in 2021, demanding reforms to address a troubling pattern of nepotism and conflicts of interest among the nonprofit provider’s board of directors.

The agency continued to pursue new contracts with AAPCI in the interim, pushing ahead with shelters planned in North Riverdale and downtown Brooklyn, and increasing funding for AAPCI to open new emergency shelters in commercial hotels — a practice Mayor Eric Adams embraced.

A months’ long lull came to an end early this summer when storefront tenants at 6661-7 Broadway received notice to vacate their units, alerting the neighborhood that the shelter was still in the works. But AAPCI’s contract was still “in progress” with city agencies.

CB8 officers were stirred to action. Together with Assemblyman Jeffrey Dinowitz and Councilman Eric Dinowitz, they called for a probe into the city’s “secretive dealings” with AAPCI.

“The congregate shelter model is broken,” Assemblyman Dinowitz said. “We all know it. But it seems to me that DHS is choosing to double down on their bad investments.”

AAPCI has not replied to numerous requests for comment from The Press.

The mayor’s contract services office has not yet received the North Riverdale shelter contract for review, a spokesperson said Friday, adding, “we would defer to the department of homeless services for information about their overall plans for this site.”

An agency spokesperson declined to answer questions about the pending contract, but said in a statement that it holds providers to “high standards.”