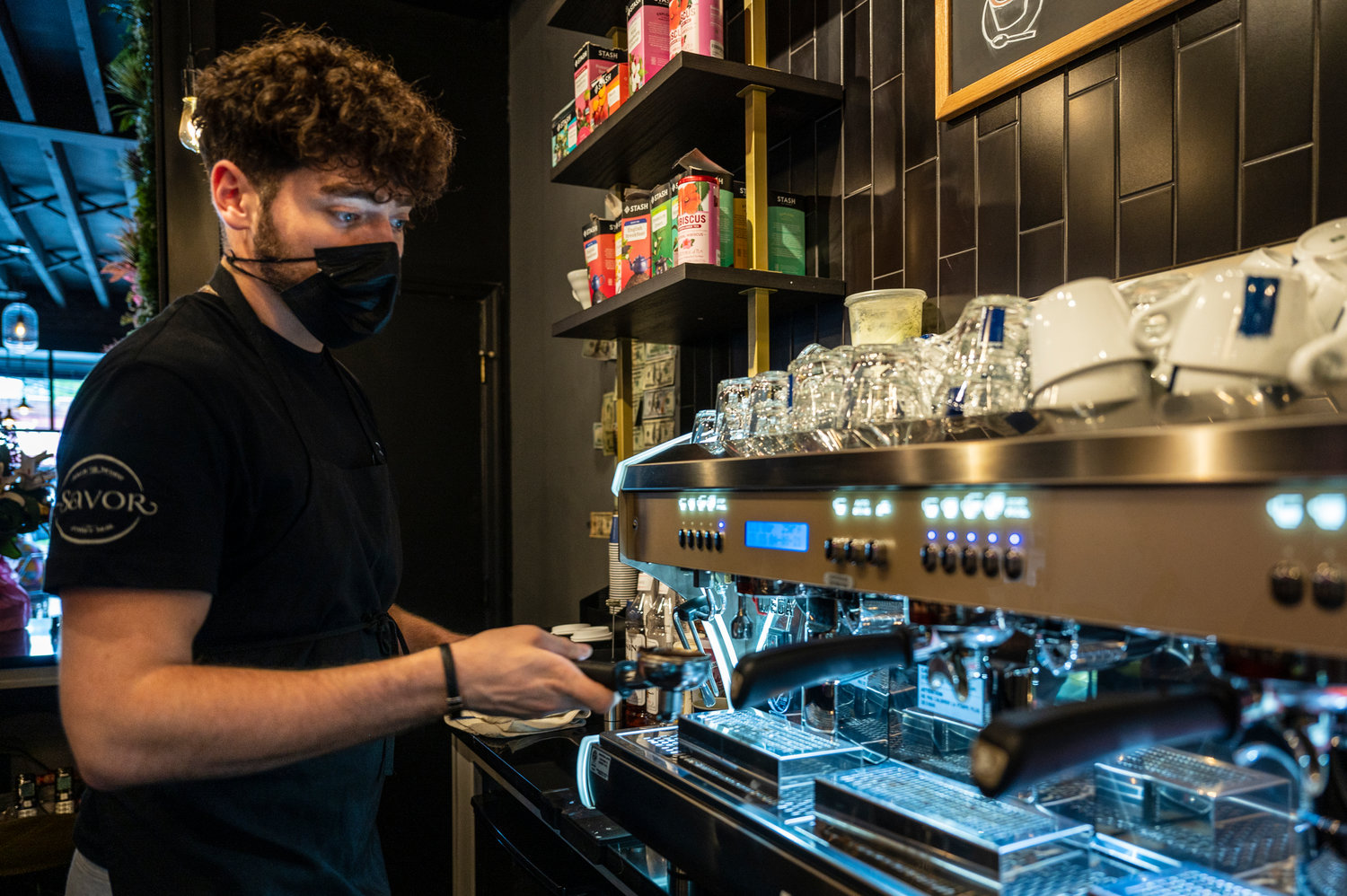 An employee at Savor Coffee and More makes a cappuccino on Wednesday afternoon.According to co-owner Tina Bakalli, Savor Coffee and more offers specialty drinks like its matcha latte. Bakalli and husband Besi have asked early customers their thoughts on the food and drink menus since Savor opened at 3725 Riverdale Ave., last month.
HIRAM ALEJANDRO DURÁN 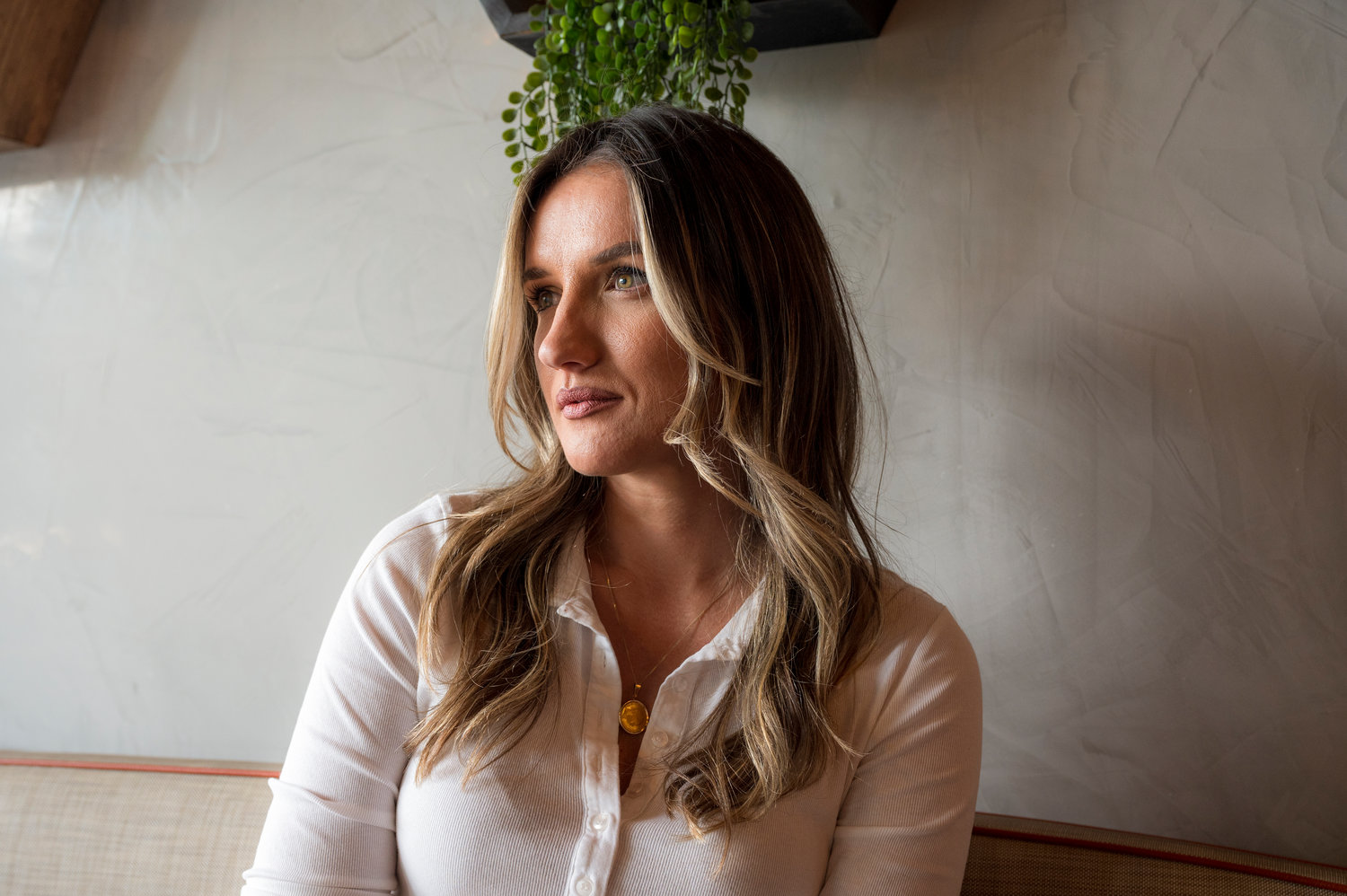 Tina Bakalli says she always dreamed of opening a coffee shop in Riverdale since immigrating here from Kosovo 12 years ago. Bakalli and husband Besi finally made that dream a reality by opening Savor Coffee and More at 3725 Riverdale Ave., late last month.
HIRAM ALEJANDRO DURÁN
Previous Next
By ETHAN STARK-MILLER

But now the tides are turning since Buunni shuttered with new independent coffee shops popping up around the neighborhood.

First came Earlybird, which opened at 5628 Mosholu Ave., in North Riverdale last June, its owners Heather Kim and Katie Mayer were inspired by Buunni to provide a homier alternative to chains like Starbucks and Dunkin’.

Now comes the wife and husband team of Tina and Besi Bakalli as they open their new café not far from where Buunni once welcomed guests — Savor Coffee and More at 3725 Riverdale Ave.

Savor takes over the space that up until last year was occupied by the boutique clothing store Designer’s Choice. Savor quietly opened its doors late last month, Tina said, with a full grand opening planned for September.

Tina and Besi have lived in Riverdale for the past 12 years, since immigrating from the Balkan republic of Kosovo. Besi owned a coffee shop in his home country for a short time in the mid-aughts, giving it up to relocate closer to his family already here in this part of the Bronx.

“When we moved to America, it was always a dream (that) we could open a little piece of Europe to bring it here in Riverdale,” Tina said. “And, you know, in Europe, they love coffee shops. And it’s a little different from all the coffee shops around here,” citing the aforementioned chains like Starbucks and Dunkin’.

Tina and Besi always wanted their coffee shop to  be on Riverdale Avenue, but an ideal storefront wasn’t available until earlier this year. Not only would it be located in a high-traffic area, the couple wanted something closer to home so they wouldn’t have to travel to other parts of the city for that small café experience.

“On Saturdays and Sundays sometimes, we didn’t want to go all the way to Manhattan so we could enjoy brunch and a coffee,” Tina said. “So we said, ‘Why not bring something here? So, they can all enjoy it without needing to go all the way to the city?’ Because you’ll find places like this in the city, but you can’t really find them around here.”

Tina’s also quite familiar with the neighborhood, not just because it’s her home, but also because she worked as a hairdresser at Delaj Hair — a salon around the corner from Savor.

“We basically know almost everybody in Riverdale,” she said. “I did work across the street as a hairstylist before we opened the coffee shop. I basically know 70 percent of our clients. So, we talk. We share comments.”

European cafés are about relaxing, Tina said — sometimes for several hours. Customers can pair up their beverage with a sampling of small dishes that include sandwiches, paninis and salads. The menu also has Kosovan-inspired cuisine, Tina added, like Savor Beef Patties.

“They come as three meat patties,” she said. And “there’s a sauce that we do back home, which if you translated in English, it’s kind of a ricotta cheese with a taste of garlic. It’s very tasty.”

They also plan to add cheese boards to the menu, as soon as Savor obtains a license to sell beer and wine. When that happens, customers will have the option of coming in for an afternoon snack and a drink that’s a little stronger than coffee.

The menu rolled out so far is a limited menu while Tina and Besi collect feedback on what their early customers like and don’t like. The full menu — including baked goods — comes with next month’s grand opening.

Looking for Tina? She can be found in the kitchen as she’s always loved to cook.

“Most of the stuff on the menu, some of them are my recipes,” Tina said. “I always dreamed of owning a kitchen.”

And of course, there will be coffee. Savor specializes in drinks like maccha lattes and avocado espresso made with Lavazza brand coffee beans.

Tina and Besi aren’t forgetting about the coronavirus pandemic. For now, Savor only requires its employees to wear masks while offering both indoor and outdoor seating. But they have a sign on the door asking that customers who come inside be vaccinated and wear masks before they sit down at a table.

So far, Savor has received a very warm welcome from the community, Tina said, with lots of customers stopping in to check out the neighborhood’s new addition.

One of those customers is Sokol Delaj, Tina’s old boss from the hair salon. Since Savor opened, Delaj said he’s been getting breakfast and lunch there almost every day.

“The neighborhood needs this here,” he said. “It’s not just a coffee shop, it’s like a modern coffee shop. It’s like a restaurant. And I like that you can go sit there, it has a nice design. It makes you feel like you’re in the city.”

No opening happens without some bumps in the road, and Tina hopes the neighborhood will be patient with her and Besi as they get Savor up to speed.

“I cannot believe how supportive the (customers) are,” Tina said. It’s “so amazing. We have a lot of people (coming in). They’re very interesting. They’re asking a lot of questions. They’re so supportive, (and) we are very thankful for that.”