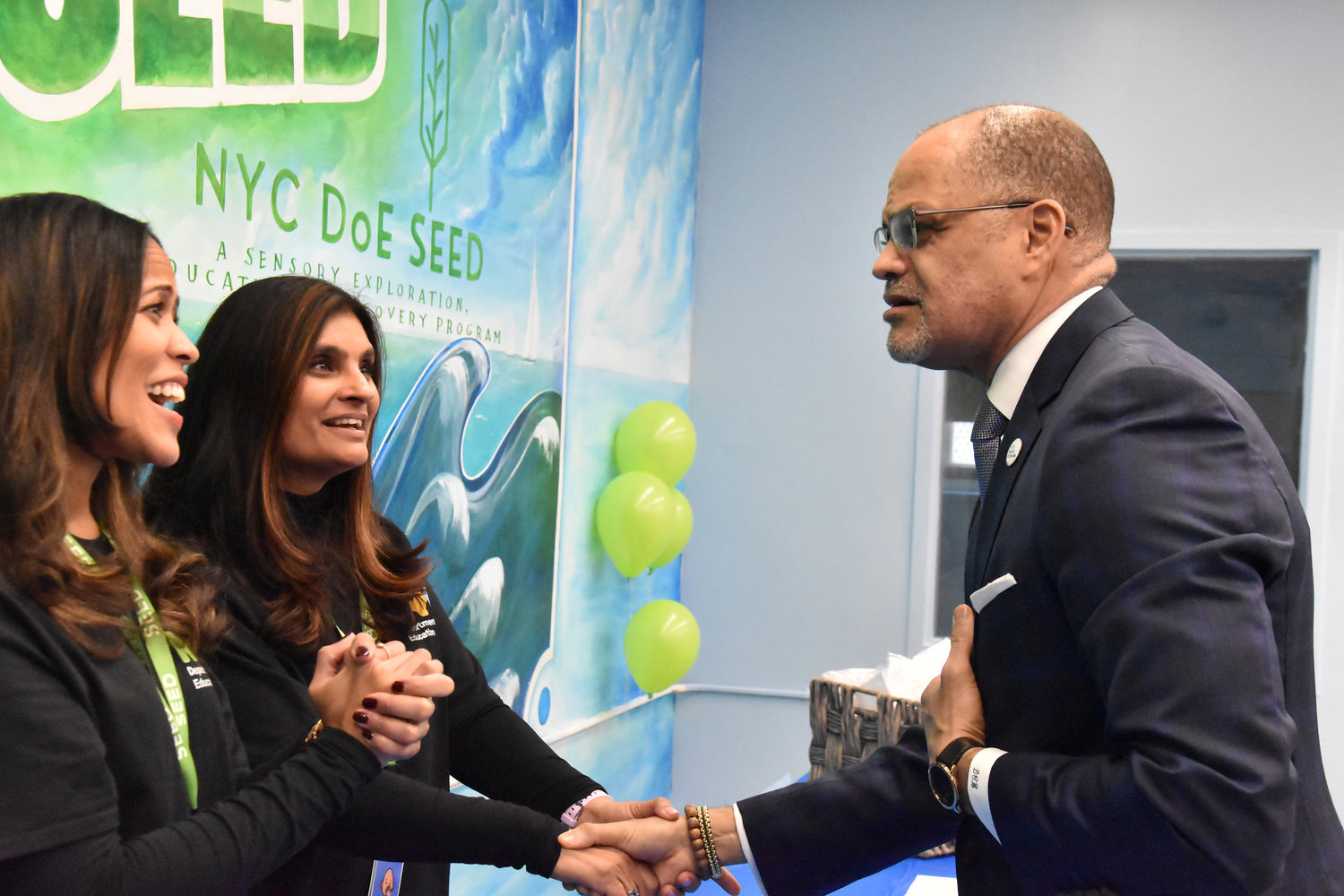 City schools Chancellor David Banks, shown with SEED educators, announced talks about the future of special education on Dec. 1. He introduced a $205 million plan to improve and expand its special education programs in public schools.
Courtesy of NYC Department of Education

Far too many of our families have had difficulties obtaining basic services or have felt that they have nowhere else to go when it comes to finding what works best for their students.”
DORA ONWUMERE, occupational therapist
By Stacy Driks

A city school program that emerged during the pandemic with one site in Kingsbridge Heights that tackled learning loss for public school students is now expanding to 70 sites in 32 geographical school districts by March 2023.

According to city reports, school disruptions during the COVID-19 pandemic affected nearly 24,000 students who needed specialized instruction but never received the appropriate services.

P.S. 340 was one of the 10 public schools chosen to host the Sensory, Exploration, Education & Discovery program, or SEED, in mid-October.

SEED sessions last approximately 45 minutes once a week for a total of 12 sessions.

The program comprises mainly P.S. 340 students, but it is a mix of students in different districts on Saturday programs. The room is set up and tailored to support students socially and emotionally.

Through parent-driven data, Suzanne Sanchez, senior executive director for related services at the education department, said some students have shown a decrease in class disruptions, abilities to transition from different activities and speak more.

Next year the agency will compare and contrast with their new data on student performance. Each student benefited differently depending on their needs for improvement.

SEED is a small project with a bigger picture as school chancellor David Banks will dedicate $205 million to expand four special education programs and a new advisory council.

The council will include 40 members — parents, students, educators, academics, and advocates — but will have subcommittees to focus on recommendations for individual special education programs.

“I am proud to share that we are making strides towards this goal with the expansion of these successful programs serving students with disabilities across the city,” Banks said in a statement.

Including SEED, Autism Spectrum Disorder, Nest and Horizon, and Path programs will prioritize students with disabilities.

The small group size in SEED — no more than four students in a class — captivates students with sensory needs.

It’s backed up by $200 million in federal relief funding. However, the new proposal from Banks didn’t explain if the $205 million is a part of that relief funding or the source of those funds.

The agency should have a complete list of site locations sometime this month. But for now, it is unsure how many students they will support.

But nearly 200,000 public school students are eligible for IEPs.

Dora Onwumere is an occupational therapist for the after-hours program who oversees the Kingsbridge Heights site.

“Far too many of our families have had difficulties obtaining basic services or have felt that they have nowhere else to go when it comes to finding what works best for their students,” Onwumere said. “Just having the chance to really be a champion for our students. Again, finding that special education is something that we’re re-imagining this year, has been amazing.”

Many parents take their child with learning disabilities out of the public school system due to the lack of special education services. A private placement is when districts guarantee private education for students if they can’t meet the need of a public school.

In one given year, the education department spent more than $1 billion covering private school costs for 10,000 students, Banks said at a hearing in August.

The amount of money spent left challenges for the agency to keep its students within the school and avoid decreased enrollment.

To apply to the program, specific requirements need to be met.

“We ask occupational and physical therapists to nominate students in their schools. And then once they do that, the SEED team then reaches out to those families and says, Hey, would you like to, you know, participate in this opportunity?” Sanchez said.

The department then figures out which students work best with each other.

Sanchez told The Riverdale Press, they were forced to waitlist families and enroll them through the next cycle. Fortunately, she said they were able to accommodate each family. And with the new expansion to nearly 70 sites, it will be easier to help each family all at once.

“We had a parent that actually said, I have my daughter that doesn’t have any diagnosis that goes to gymnastics on Saturdays, and my son, who has a classification (diagnosis) of ASD, it’s hard for him to go to these places, “Onwumere said.

On the weekends, parents have a safe space to take their children to call their own and socialize while educating themselves with others their age who are similar to themselves. The program builds bridges and relationships.

“I think I would just say that the idea of SEED is an example in terms of recognizing and embracing this idea that not all students learn the same way,” Sanchez said. “And some students, we need to teach them explicitly about their emotions and about their sensory regulation systems, and that’s OK.”