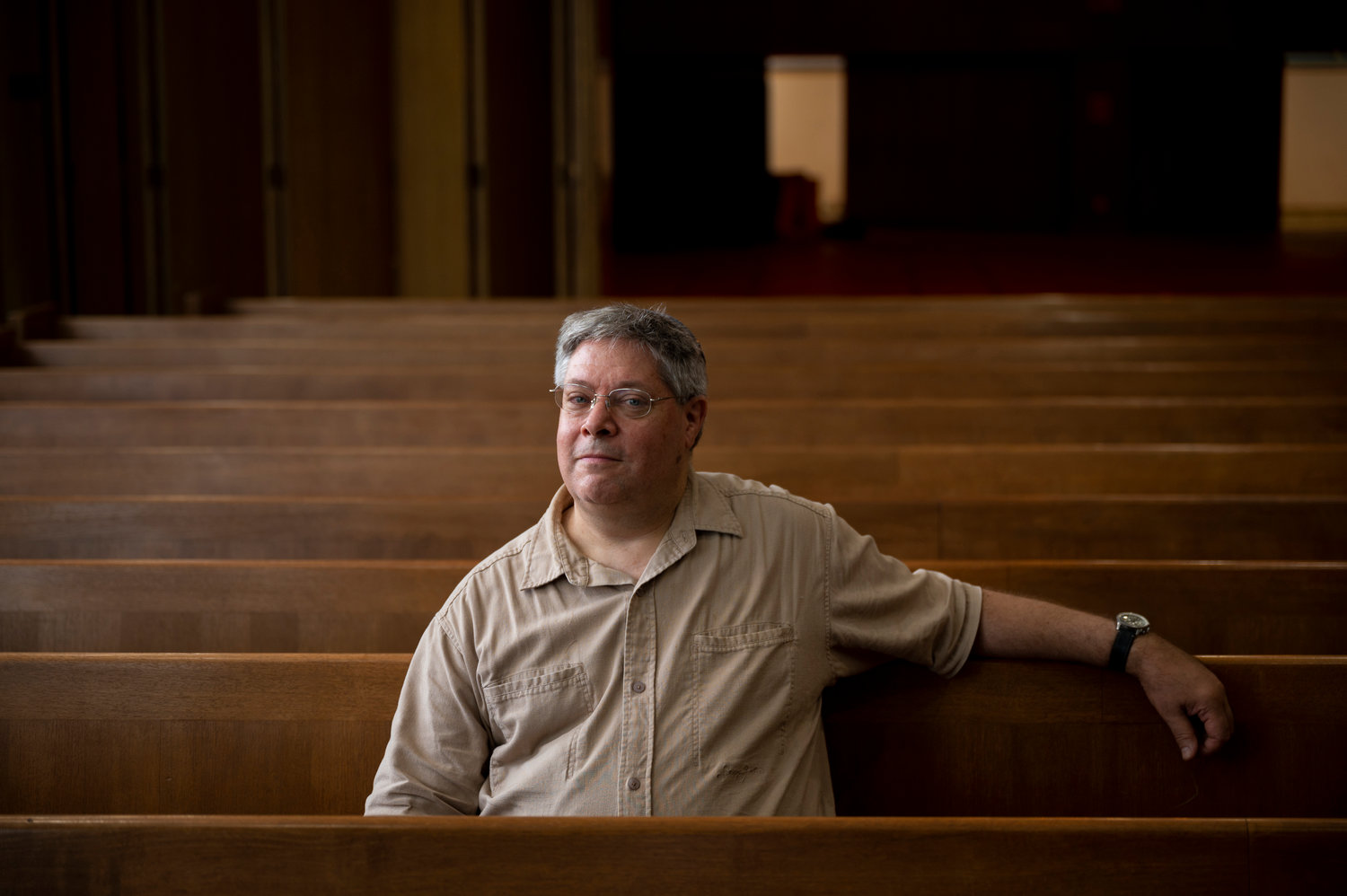 Riverdale Temple rabbi Thomas Gardner says that with in-person services returning, the High Holidays at his shul will be much closer to normal than they were last year when the coronavirus pandemic forced those same services to take place remotely. However, anyone attending in-person services must pre-register, be vaccinated, and remain socially distant from others.
HIRAM ALEJANDRO DURÃN 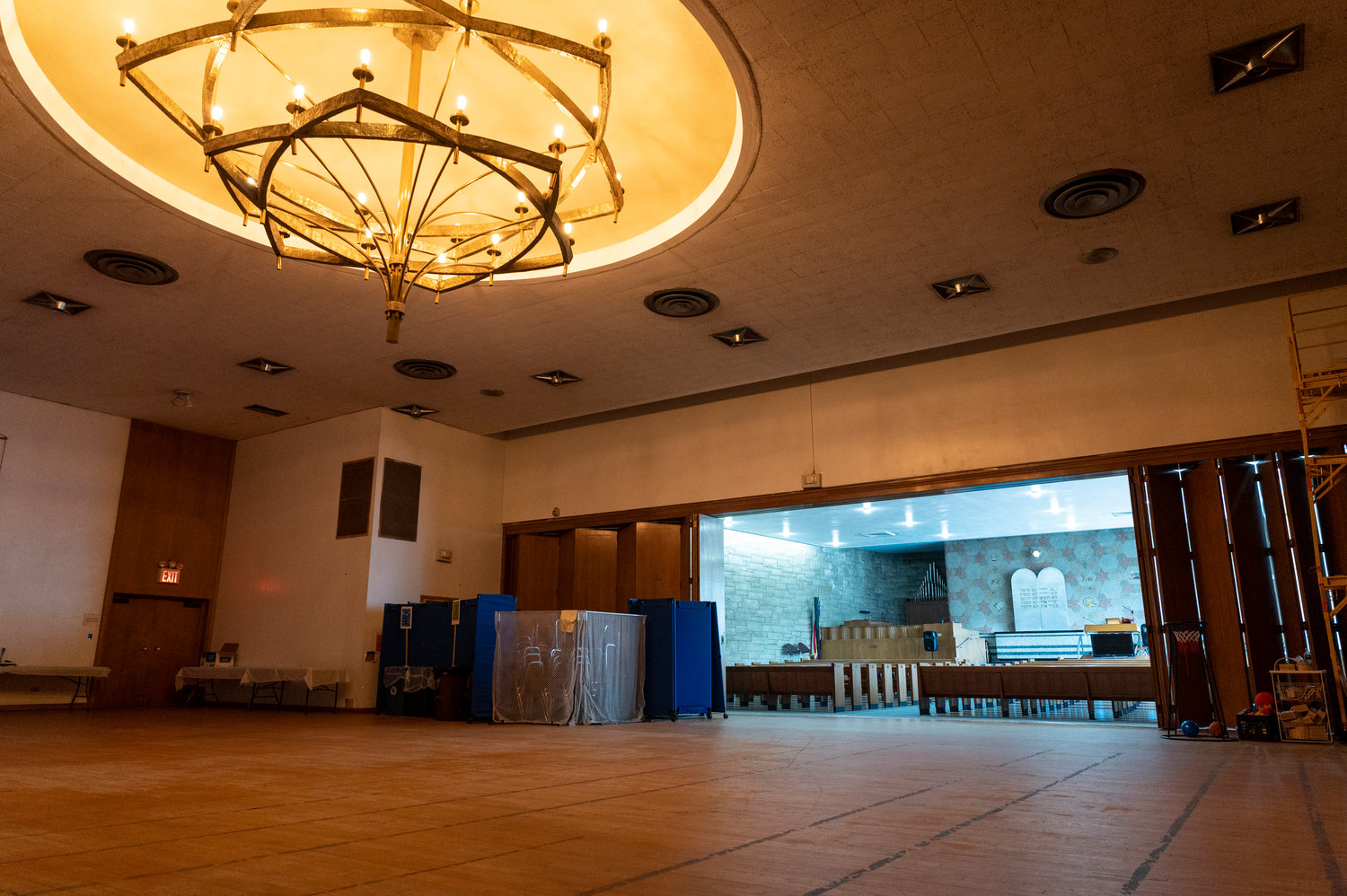 Riverdale Temple will use its ballroom, adjacent to the 4545 Independence Ave., sanctuary, as extra seating space for their Rosh Hashana and Yom Kippur services. While remote services will be available, Rabbi Thomas Gardner says those attending in-person must be vaccinated.
HIRAM ALEJANDRO DURÃN

Rabbi Barry Dov Katz says he’s spent the month leading up to Rosh Hashana and Yom Kippur blowing the shofar — an instrument made from a ram’s horn that’s used in Jewish ceremonies — on street corners around the area. Katz says this is to give people who probably can’t come to synagogue in-person a little piece of the important holiday.
HIRAM ALEJANDRO DURÃN/ File 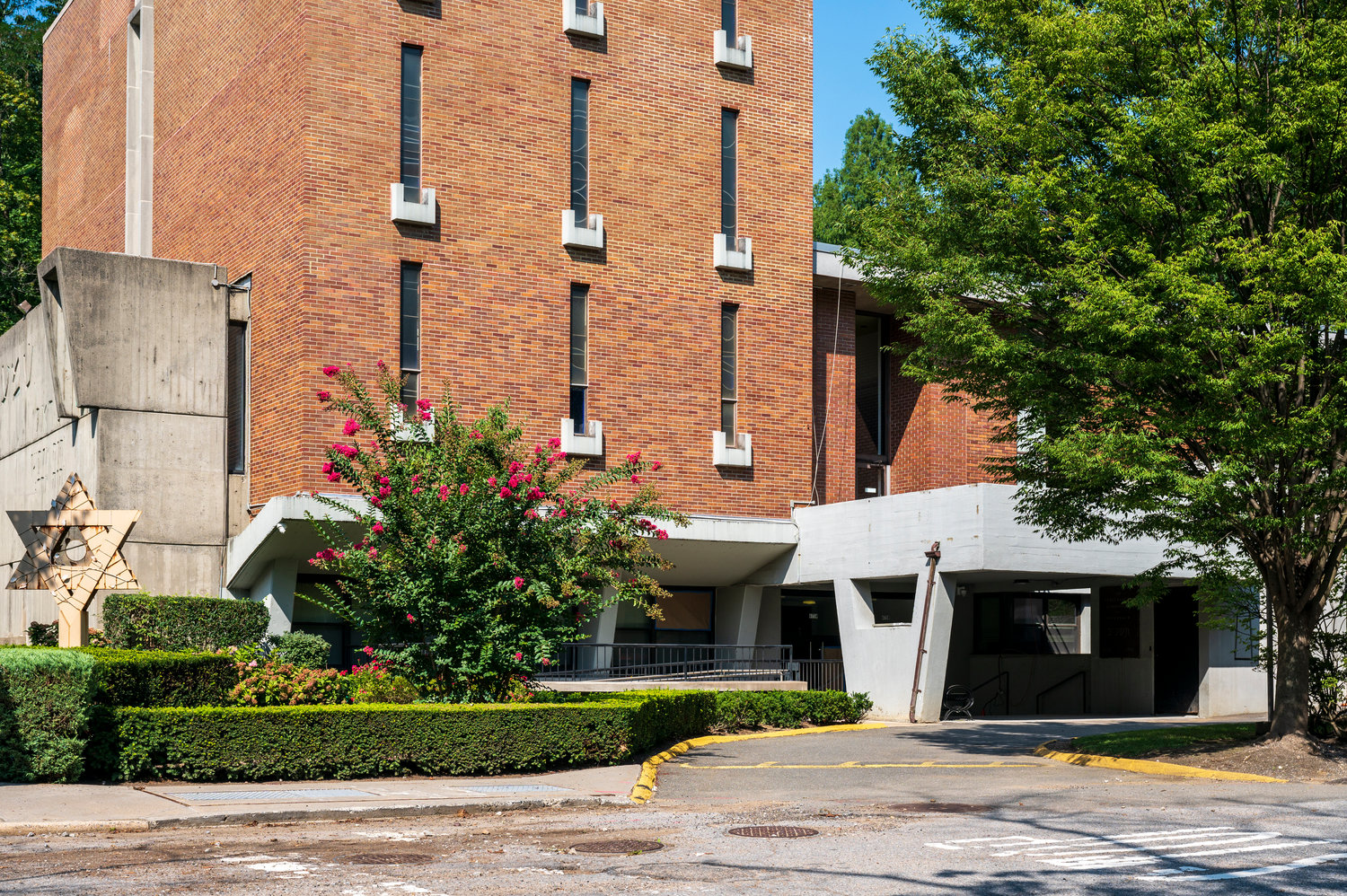 The Conservative Synagogue Adath Israel of Riverdale will offer multiple indoor and outdoor High Holy Day services this year in an effort to keep people safe from the surging coronavirus delta variant. Rabbi Barry Dov Katz says members will have to sign up for specific times to maintain capacity limits.
HIRAM ALEJANDRO DURÁN 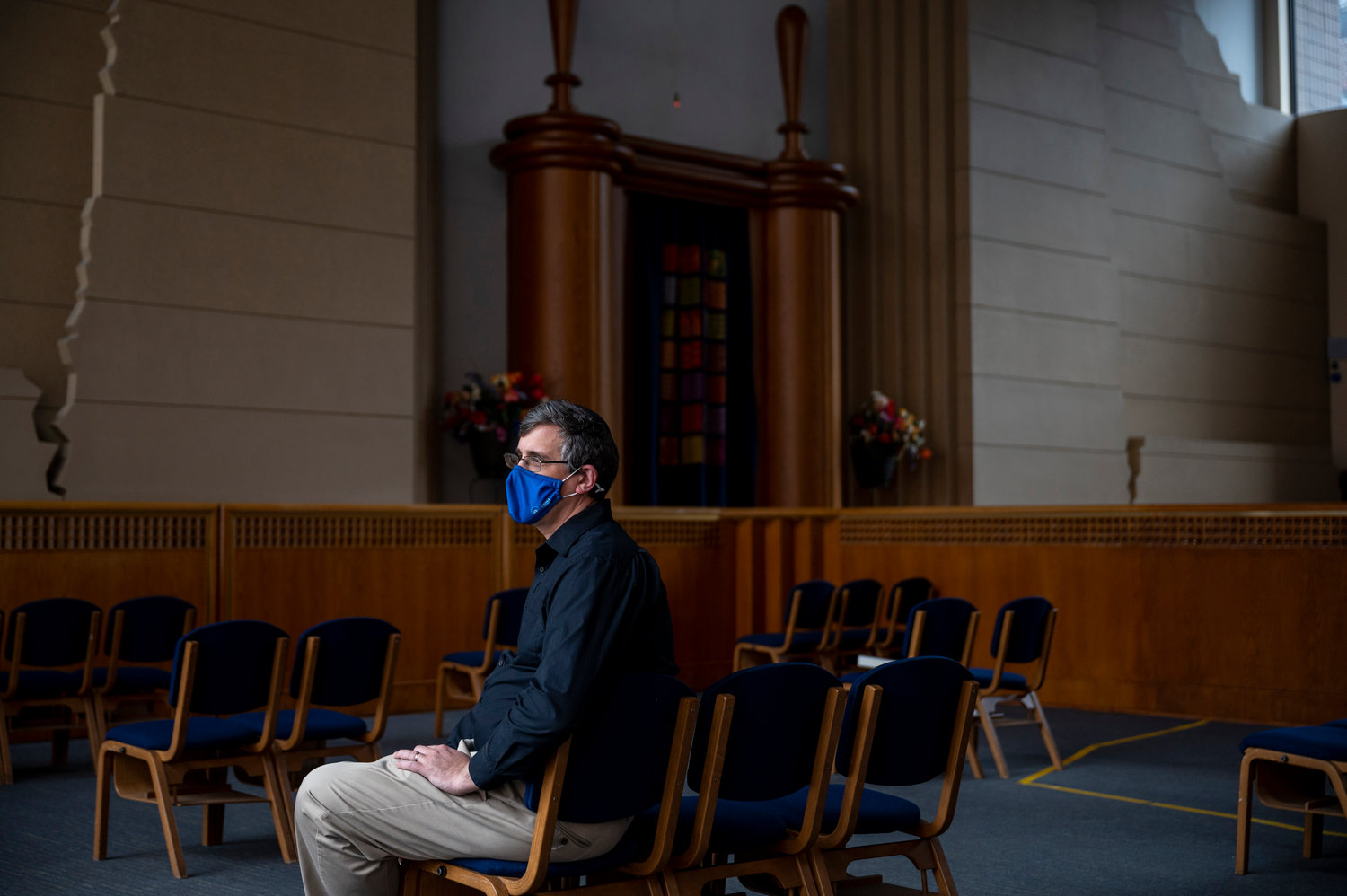 Richard Langer, executive director of the Hebrew Institute of Riverdale, says his shul is requiring members to be vaccinated and masked to attend in-person High Holy Day services this year. The 3700 Henry Hudson Parkway synagogue also will have outdoor services for those who still don’t feel comfortable indoors.
HIRAM ALEJANDRO DURÁN/ File 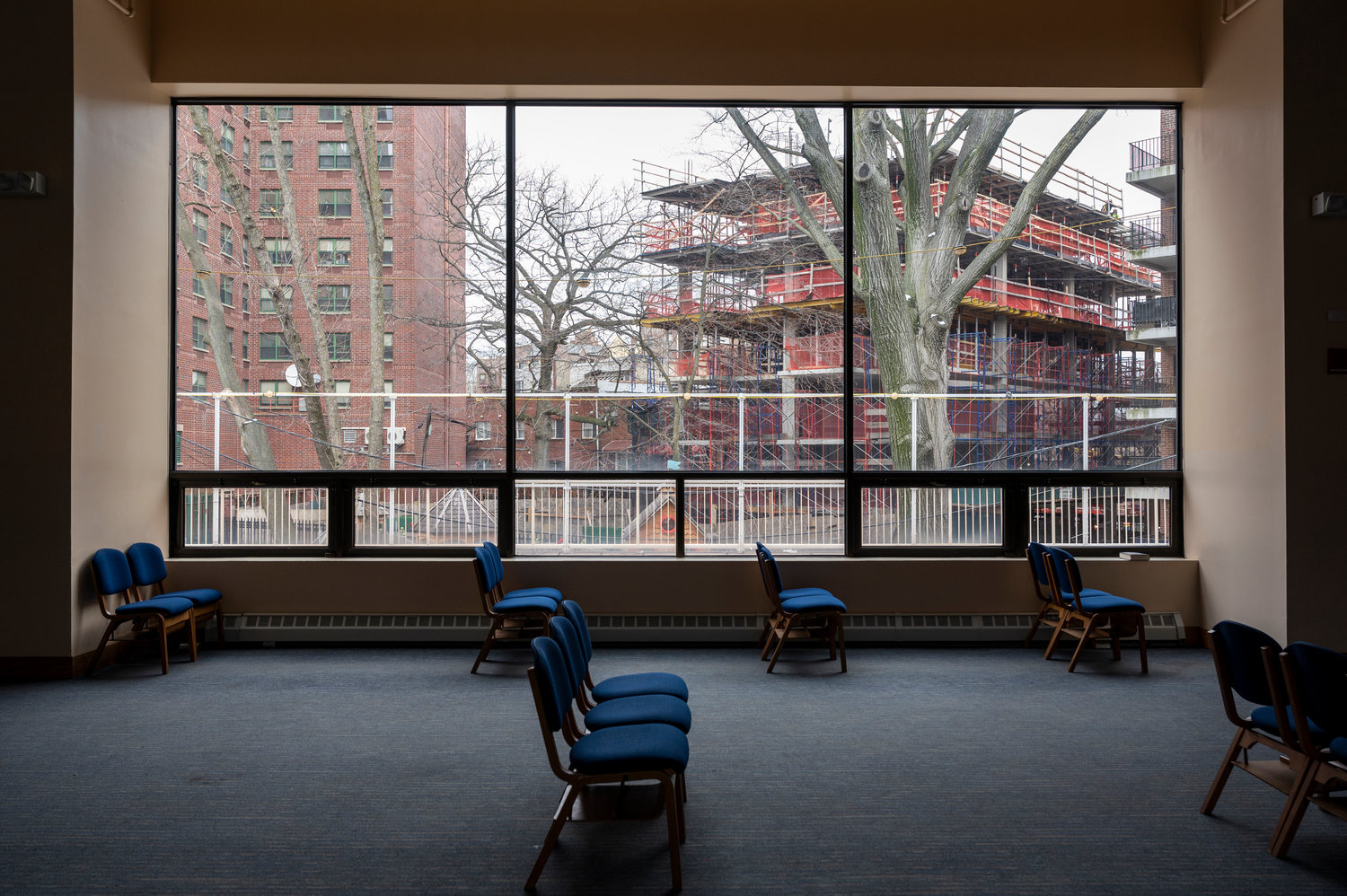 The Hebrew Institute of Riverdale will hold High Holy Day services this year that are much closer to how they were before the coronavirus pandemic, says synagogue executive director Richard Langer. That’s because they can have a higher capacity, allowing them to have longer services that cover more of the liturgy.
HIRAM ALEJANDRO DURÃN/ File
Previous Next
By ETHAN STARK-MILLER

How can religious people come together and celebrate during a global pandemic?

That’s a question Jewish communities all over the world are wrestling with for the second straight year as the High Holy Days of Rosh Hashana and Yom Kippur approach. And the Jewish community in this part of the Bronx is no exception.

Rosh Hashana is, quite simply, the Jewish new year — a time when families congregate at synagogues for two days of prayer to welcome 5782. Yom Kippur is the Jewish Day of Atonement, gathering people at shuls to repent their sins of the past year. Many also fast beginning at sundown.

Like most Jewish holidays, both occasions revolve around the congregation of people — whether it be in a synagogue or at home with family — gatherings that have become far more challenging during the coronavirus pandemic. While the pandemic is far more under control this year than last, the coronavirus is again posing a mounting threat through the more contagious delta variant.

So this year, local synagogues must balance a desire to return to normalcy with the ongoing threat of the virus. And that’s exactly what the Hebrew Institute of Riverdale — an Open Orthodox synagogue at 3700 Henry Hudson Parkway — is trying to do.

“We’re looking to find the balance between safety and spirituality,” said Richard Langer, the synagogue’s executive director. “Just working with our medical advisory committee as the data — as the science — changes and evolves. And as the local situation changes.”

In practice, that means following guidance from the Centers for Disease Control and Prevention, Langer said, requiring people to be vaccinated and wear masks while inside the synagogue. There will be ushers, clergy and board members circulating in the service reminding those not wearing a face covering to put one on.

To allow for physical distancing, the shul is only half-filling its indoor facilities, Langer said. The temple also will hold outdoor services for those who still don’t feel comfortable inside.

Even with these precautions, Langer said, this year’s services should resemble something far more normal than last year’s when hard capacity and social distancing caps were enforced. Religious leaders also can extend the length of services this year thanks to the increased capacity.

“Some of the things that make the holiday special — which are families coming together — are very much back this year,” Langer said. “Whereas last year you had much more family separation. So, I think that’s a huge component of the holidays. And this year in striving for that sense of spirituality and normalcy, we’ll be bringing back even more of the traditional liturgy that resonates with people. For different individuals, different pieces of the liturgy really evoke that spiritual holiday feeling. So, they’ll have more of that this year.”

The Bayit won’t have a remote option for services, Langer said, because Orthodox rules forbid the use of technology on holidays.

However, those same rules don’t apply to the nearby Riverdale Temple at 4545 Independence Ave. The Reform synagogue will stream its Rosh Hashana and Yom Kippur services online for people who aren’t vaccinated, says Rabbi Thomas Gardner, or don’t feel safe attending in-person services.

However, in-person attendees are required to pre-register, Gardner added, where vaccination and face masks will be required. Those who come physically will be asked to stay socially distant.

There also will be outdoor services available for kids, Gardner said, because those younger than 12 are still ineligible for existing vaccines.

“And we imagine that there will be a number of people who will not want to come in person due to fears of the delta variant,” Gardner said. “So, we don’t think that there’ll be a big problem with space. But you never know.”

This year’s High Holy Days will be much closer to how they were before the pandemic than 2020’s, Gardner said, when services were entirely remote. And since returning to meeting in-person, the Riverdale Temple congregation has found a new appreciation for being able to worship physically.

“One of the things about Yom Kippur is that we fast for 24 hours or 25 hours,” Gardner said. “And then the next few days, when you eat food, you really appreciate the fact you’re allowed to just eat food. And it’s kind of a similar thing. That it woke us up to how wonderful it is to be able to get together and to pray freely together.”

Another bonus of meeting in-person this year, Gardner said is welcoming back members who typically worship only during the larger holidays like Rosh Hashana and Yom Kippur.

“There are people who we basically haven’t seen for two years,” Gardner said. “I think it’s going to be very powerful for them when they come back.”

After changing High Holy Day plans several times over the summer, Rabbi Barry Dov Katz says the Conservative Synagogue Adath Israel of Riverdale is using a similar model to what was put in place last year. That means offering multiple indoor and outdoor services that members of the West 250th Street synagogue can sign up for, with a requirement that those attending indoor services be vaccinated.

Additionally, Katz said, in the month leading up to the holiday, he’s roamed the neighborhood blowing the shofar — an instrument made from a ram’s horn used in Jewish religious ceremonies.

“It’s just a little piece of a holiday for people who probably won’t be able to be in-person in synagogue,” Katz said. “So, I’m taking it to the streets a bit. That’s like one little sweet thing.”

Overall, the message of Rosh Hashana and Judaism is hope, Katz said, which is important to have — especially during these turbulent times.

“We hope that things are going to be better (this) year. And we commit ourselves to working to making it better — both in terms of what we do and how we change the world, and also how we react to what happens.”