The case of missing globos: bank heist or art theft? 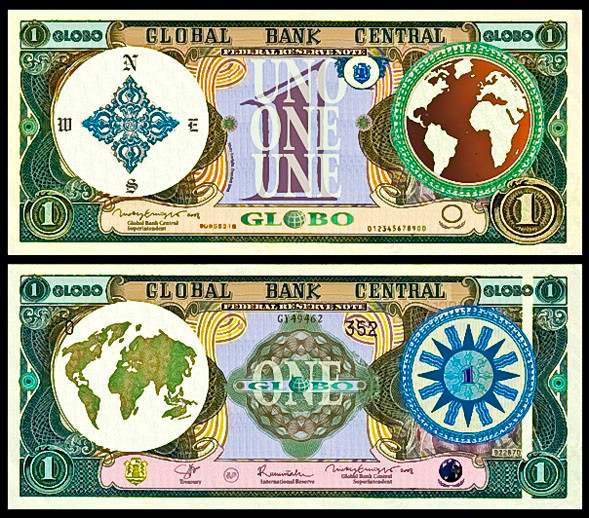 A briefcase of Nicky Enright's Globos was stolen from the World Bank on May 10.
By Kate Pastor

He never thought his art installation would be taken this far.

Riverdale resident Nicky Enright said his briefcase full of Globos — an international currency he created — disappeared from a World Bank exhibition on May 10.

The exhibit, About Change in Latin America and the Caribbean, is meant to enrich the dialogue between the World Bank and the international community, and opened on April 5.

The digitally fused cash of numerous countries seeks to ask critical questions about the global economy of which the World Bank is emblematic, making the international financial institution that provides loans to developing countries an interesting place for the art to be displayed.

“The Globo is a money remix that evokes a vision of world unity and progress, while simultaneously suggesting the ever-increasing reach of corporate globalization,” Mr. Enright, a multimedia artist whose globos have been featured in The Press, said of his art in a press release.

But the currency’s place inside the World Bank also made perfect sense.

Mr. Enright said he uses the tender as “a performance/intervention in the real-world economy,” making its heist from a real-world financial giant an intriguing turn of artistic events.

The World Bank Art Program did not respond to a request for comment by press time.

Mr. Enright said The World Bank has agreed to compensate him for the missing case but the circumstances around its disappearance remain a mystery.

Perhaps someone just took an idea and ran with it.

“This definitely adds an interesting dimension to the performance aspect of the piece, and I wonder if the thieves weren’t artists themselves. The story mixes art and life in an unusual way; it’s a real bank robbery, but of my symbolic money.  Meanwhile the Globo highlights the symbolic nature of all money. Plus it’s as if the context and story help to transform each other,” Mr. Enright wrote in an e-mail.