Renters struggling to pay rent during the pandemic have help. The problem? It just hasn't arrived quite yet for many 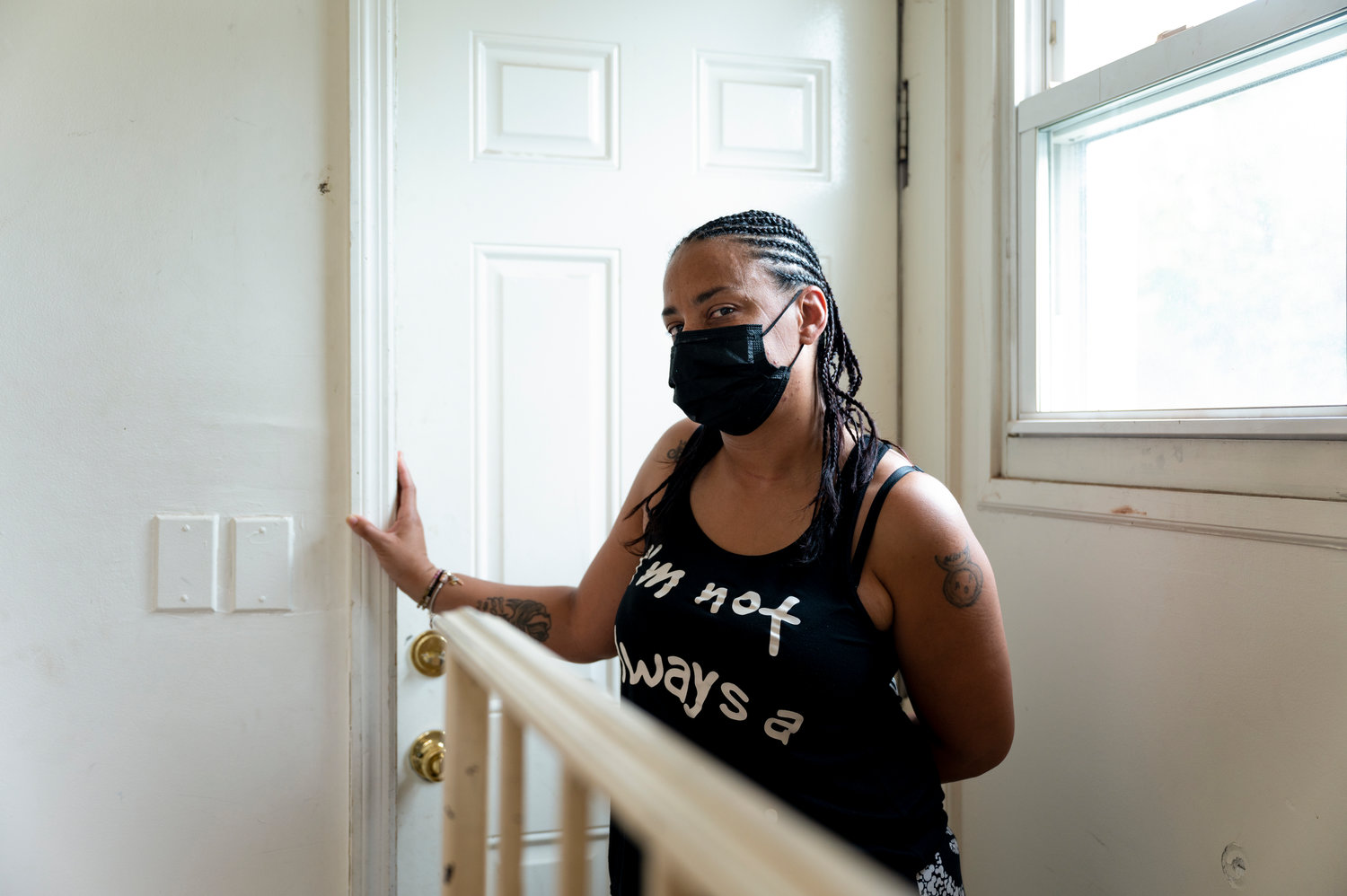 Veronica Cruz stands in the doorway of her mother’s Bronx apartment. Cruz — like many other families — is waiting to hear whether she’s eligible for federal rental assistance dollars she applied for months ago. The state has $2.6 billion to distribute, but little has so far made it renters in need.
HIRAM ALEJANDRO DURÃN

At this point I didn't know what to do. I just knew I had to focus on not losing my place.”
VERONICA CRUZ
Support journalism

Like many since the start of the coronavirus pandemic, Veronica Cruz has been dealt a bad hand.

First, the EMS technician had her hours slashed by the New York Fire Department. Still she found a way to pay her rent, thanks in part to a second job she held. But when that went away, Cruz found herself buried in past-due notices. While some could wait for better days, others — like those she had to pay in order to keep her home — were far more pressing.

“At this point I didn’t know what to do,” Cruz said. “I just knew I had to focus on not losing my place. Now I have to see how I’m going to fill that void.”

But even life as an EMS tech is far from glamorous — or lucrative. Cruz depended on overtime to keep her head above water. That’s something the single mom lost completely with the cut in her normal hours.

Cruz found some relief with a small loan, but it’s one that carries a high interest rate, meaning the more she catches up, the deeper underwater she goes. Even worse, Cruz couldn’t get payment deferred, meaning she’s already paying the loan back, leaving her little left to not only cover the $1,900 she needs for rent on her two-bedroom apartment, but the rest of her bills as well.

Cruz is lucky when it comes to landlords, however. Knowing her struggles, he suggested Cruz apply for emergency rental assistance through the state — a program she admits knowing nothing about at the time.

The program was part of the American Rescue Plan passed by Congress and signed into law last March by President Joe Biden. It adds $22 billion to a program that already allocated $25 billion at the height of the pandemic last year, including $2.5 billion for New York.

But getting the money from Washington to renters like Cruz requires intervention by state governments. And Albany has struggled to get much of any of that money out to those who need it most.

Of the more than 176,000 applications filed for rent assistance in New York — including more than 1,300 locally — only 46,000 have been approved for assistance as of Aug. 23, according the state temporary and disability assistance office.

Brooklyn may have received the most help from federal dollars so far — nearly $55 million — but the Bronx has had the most payments. Nearly $49 million has been distributed in the borough so far, with checks averaging more than $11,600 each for both arrears and prospective rent.

For Cruz, such rent assistance would be wins for her and her landlord.

“He asked me to see if I qualified for it because he knows I’m a first responder,” she said. “He thought I should see if could get help with the rent seeing as how I was always paying the rent on time before.”

She applied in early June. Still, even with more than 4,000 payments already made in the Bronx so far, Cruz has yet to be one of them. One problem? Her landlord hadn’t submitted his own application — a part of the process Cruz didn’t even know was necessary.

It’s an overall process that’s just far too complicated, Cruz said, and it probably explains why so many who need the help are getting lost in bureaucratic red tape.

“I felt like all this time, I’m struggling, trying to make ends meet, and they’re not even doing their best to get the money out to people who need it,” she said. “At the very least, give us an update status so we can know where we are in the process.”

These are struggles Sarah Vanga says she’s seen all too often. She’s the chief executive and co-founder of a small non-profit, Your Network Caring Community Advocate, which aims to help displaced families across the country find shelter and permanent housing after natural disasters, and when suffering financial hardships.

“You couldn’t imagine how many families we’ve helped — not just in the Bronx, but throughout the entire city — to file for rent assistance,” Vanga said. “It’s unbelievable how slow they’re moving to help get this money out to New Yorkers.”

Vanga formed the advocacy group with Sonia Velazquez after many Puerto Rican families were displaced in the wake of Hurricane Maria in 2017, Velazquez is now a staffer for Brooklyn councilwoman Darma Diaz.

Many problems families face in the aftermath of such events isn’t a government willing to help, but more a government not willing to make the path in getting that help as clear and easy as possible.

“It’s difficult because we deal with a lot of families who were already in despair before the pandemic,” Vanga said. “To see them having these difficulties now is so heartbreaking.”

But Vanga’s organization is in it for the long haul. It’s helping families get access to housing resources and following up with their progress, she said, even after they’ve successfully found housing.

“We want people to know that we will help them as much as we can,” Vanga said. “And that means making sure they get the help they need.”

Yet, some of the bureaucratic mess extends beyond just complicated applications. Some recent reports, including one by City Limits reporter David Brand, claims a consultancy firm contracted by the state named Guidehouse is falling short of meeting its benchmarks to distribute federal rental relief dollars through an online portal. It’s a job the firm reportedly received $115 million to complete.

After she was sworn in last week, Gov. Kathy Hochul announced some changes of her own she said would streamline distribution of federal dollars, while making it impossible for landlords to evict anyone who is still trying to secure that help.

New York has until the end of the month to distribute at least 65 percent of the allocated money. Otherwise, they’ll have to send any unused funds back to Washington.

“We have to get the help out to these people like yesterday if we plan on making it past all of these deadlines,” Vanga said. “It’s hard to believe with all the time they’ve had in the age of the internet, they can’t get this money out fast enough to the people.”