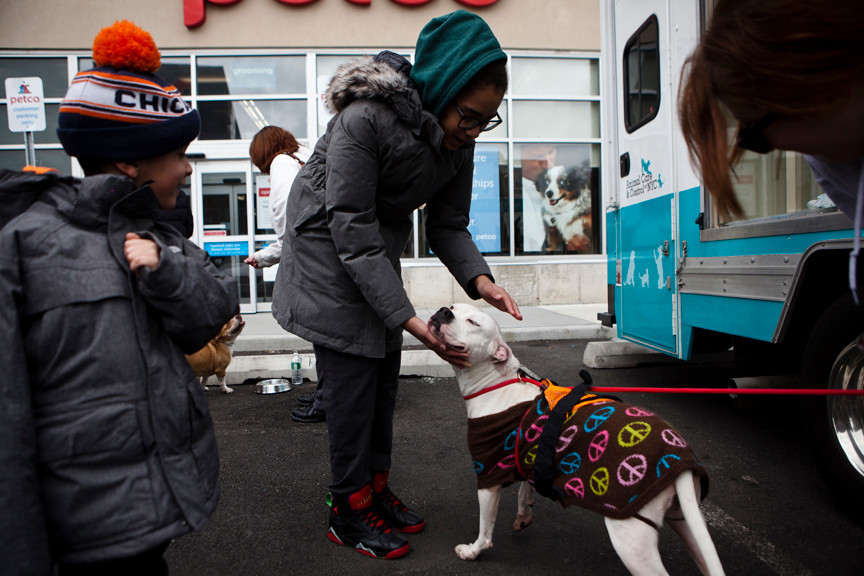 Jayce Rodriguez, left, and Bryalana Santos pet Ellie, a 2-year-old pitbull mix looking for a family to adopt her at an event at Petco last Sunday.
Amir Levy 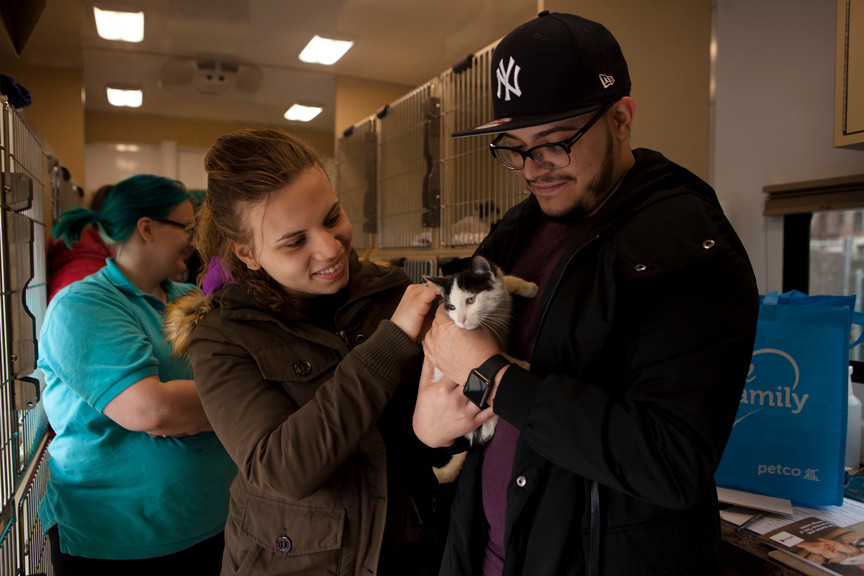 Isamar Pichardo and Miguel Martinez with an 11-week-old cat they adopted at a mobile pet adoption center in Riverdale on Sunday.
Amir Levy
Previous Next
By Shant Shahrigian

Call it love at first bark.

As Beth Marchand approached a mobile pet adoption van parked outside the Broadway Petco on Sunday, Muenster the 1-year-old shih tzu mix affectionately leapt onto her.

“Babe, look at him, he’s like holding onto me!” she called to her boyfriend Paul Heras.

Fate seemed to come into play once the couple learned the fluffy white dog’s name.

Informed by an on-site worker with the Animal Care Center of NYC that the petit pooch was as big as he was going to get, Mr. Heras, 39, was on board. The couple started filling out forms to give Muenster a new home.

They were the latest of about 130 families to adopt a pet from the van since it started making weekend trips throughout the Bronx last summer, according to the Animal Care Center of NYC’s Manhattan Adoption Outreach Coordinator Megan Novak. In addition to Muenster, harlequin cats Sven and Olaf — brothers in a litter found in Union Square who were named after characters in the movie “Frozen” — went to local families over the weekend. All the dogs and cats at the van were vaccinated, spayed, neutered and ready to adopt on the spot. Each also had a microchip that can track them if they get lost.

Miguel Martinez and his girlfriend Isamar Pichardo picked out Olaf.

“He’s super affectionate,” Ms. Pichardo, 24, said of Olaf. “When we carried him, he was already purring.”

Kimberly Hamburg and her two children selected Olaf’s brother. One of their cats had recently passed away. They still had a poodle, Sarah, who will become their new kitten’s neighbor.

Adoptions usually run from $50 to $150, but last weekend there was a St. Patrick’s Day special offer for about $20. Cats and dogs are available from the Bronx van and another mobile center that makes the rounds in Brooklyn. The Bronx facility was launched thanks to a $250,000 state grant secured in 2014 by state Sen. Jeff Klein, whose district includes Riverdale.

Ms. Novak explained the adoption application process while a 2-year-old mixed breed dog named Ellie pranced in front of her.

“It’s mostly about the conversation we have, to see what your experience is, to see if the animal is a good fit for your home,” she said.

“What, crazy pants?” she said, turning to Ellie, who was wearing a sweater to protect against the cold and a vest saying “adopt me” in all caps. “I know, I know. You are excited about life.”

After completing their application, Mr. Heras and Ms. Marchand received a roughly half-hour primer on caring for Muenster from Animal Care Center of NYC’s Mobile and Adoptions Counselor Leslie Lewis.

“He’s a bit forward when greeting and eliciting play,” she read from a form based on an assessment of the dog. “He’s just very friendly and wants to be your friend,” she translated.

As she received free coupons for dog products, Ms. Marchand enthused about the prospect of life with her new pet. She had recently cared for a neighbor’s 1-year-old Yorkie toy dog.

“He’s like the same age,” the Riverdale resident said of Muenster. “They can have play dates.”

Many who visited the mobile adoption center on Sunday said they preferred adopting a pet to buying one.

“Why pay when you can rescue?” said Ms. Hamburg. “There’s too many pets that need homes.”

According to Ms. Novak, the adoption van will be back at the Petco at Broadway and West 237th Street on Sunday, April 24.