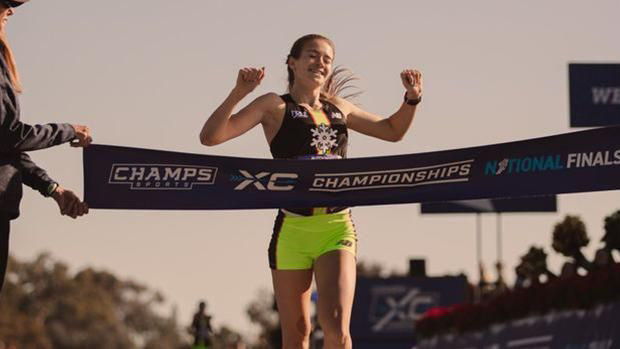 For Karrie Baloga and the small number of serious contenders chasing cross country glory this year, San Diego was the pinnacle. The famed Balboa Park had been calling her name all year long.

She has many proud qualities, being the daughter of two accomplished runners, a sister to two brothers and a University of Colorado commit just to name a few. Now, the time has come to add national champion to that list.

Baloga’s path to San Diego came through Van Cortlandt Park, the site of the Eastern Regional Finals where the top 10 finishers punched their ticket to the title run at Balboa — the biggest of them all. Baloga’s display of dominance on the hallowed straits of Vannie over the years concluded with a second-place finish in regionals, and a clear vision of what was to come next.

“I think we have an advantage coming from the Northeast because we are used to courses that are hilly and pretty challenging,” Baloga said, in reference to the familiar landscape at Balboa Park. “I felt like I knew exactly what I wanted to do when I wanted to do it.”

By virtue of a steadfast commitment to her routine, Baloga proved no match for her competition in crossing the finish line with a time of 16:49.20 — a personal record in her five-year career. She finished the same race last year in fourth place and needed an extra 40 seconds to do it. But no challengers went unaccounted for this year, including Chloe Shea of Massachusetts, who beat Baloga at regionals and then took second place  the nationals behind her by almost six seconds.

Baloga maintained her own pace the whole race, and made her most aggressive push at the bottom of the second hill. There was no looking back after she claimed the lead for good around the 2.5-mile mark, en route to delivering an all-time performance.

“I did try to have a lot of fun with it,” Baloga said of her emotional win. “But I feel like you do need to be really focused to do what I did.”

After getting a firsthand look at the playing field in years past, Baloga finally got her shining moment on the national stage.

“I had worked for that for almost four years,” Baloga said. “So, you can imagine how awesome that was.”

There is a sense of wisdom that comes with running Balboa for the third time. Having those experiences to lean on was a game-changer in the heat of the race for Baloga, along with some familiar voices in the crowd. Her parents, grandparents, brothers, and high school coaches traveled to San Diego to create a personal cheering section.

To say the Baloga family is invested in cross country would be an understatement. Karrie’s father, Barry Baloga, was a longtime cross country coach at North Rockland High School after his own career which took him from Pearl River High School to the University of Delaware. His choice of college was also the destination of his wife, Katie, who ran for Delaware and competed in the first ever steeplechase in the Olympic trials.

Growing up with her older brother, Michael, and younger brother, Jack, Baloga eased her way into racing competitively after playing soccer for many years. But as the years went by, and with Barry deciding to leave the coaching ranks in 2015, a changing of the family guard occurred. The mantle had been passed to Karrie. It was her time to chase greatness, which had seemed like a never-ending pursuit until a week and a half ago.

Since San Diego, there has been a lot of reflection and far less worrying. Barry says the nonstop conversations with Katie about their daughter’s career took a rare break recently during a walk together.

“Typically those walks we go over all the tough stuff we have coming up,” Barry said. “It was the first time we never had to strategize or game plan because she had put herself on the mountaintop.”

A glimpse of what it takes to get there involves 5 am wake-ups for Baloga to get ahead and master her routine, according to her father. It’s a rinse and repeat process that Baloga embraces.

“That was more than likely the difference-maker,” Barry said. “She really is the most intelligent athlete that I have ever come across.”

Baloga felt no choice but to have an aggressive mindset and a belief that she was the best — unless, as she puts it, “there would be no point of being there.” The goal was to beat the competition, but not take it for granted. Confidence and comfort in her craft were the guiding principles that helped take care of the rest.

“I had set everything up the entire year pretty much to win,” Baloga said. “All the little things I did were hopefully going to add up to that win.”

After winning her race, Baloga witnessed a future classmate, Kole Mathison of Indiana, capture first place in the boys championship. Being able to share that accomplishment together was a highlight, according to Baloga, as they were accompanied by University of Colorado alumni in attendance as well as Colorado coach Heather Burroughs.

A weekend that was special to begin with became all that more meaningful with the support from the Buffaloes’ program.

“I remember being in an interview and seeing Cole go into the loop for the second time and he was up in front, and I thought ‘wouldn’t it be the coolest thing if both of us won’,” Baloga said. “We definitely made a statement for Colorado.”

Baloga says she is taking 10 days off since being crowned the top girl’s high school runner in America. When she is not pursuing her dreams, Baloga enjoys the company of her family and the time they spend together nestled in the serenity of their home life. And since returning to classes at Cornwall Central following her win, Baloga has received plenty of congratulatory messages.

According to Baloga, that sense of community is emblematic of the way of life in Orange County.

“Coming back to my hometown was really awesome,” Baloga said. “There was a lot of random applause in my classes, which was really cool.”

This Christmas will be particularly festive in the Baloga household before Karrie looks ahead to another busy year of competition.

Baloga will resume her training preparations in hopes of qualifying for the U20 World Meets, with qualifiers set to take place next month in Virginia for a spot in the main event come February in Australia. Baloga is no stranger to the international spotlight, having earned 11th place this year in the 3,000-meter steeplechase as part of the U20 World Meets in Cali, Colombia.

The future has a lot in store, but for now, the national champion can rest on her laurels. of a lifetime.