What the hit film ‘Crazy Rich Asians’ can teach us 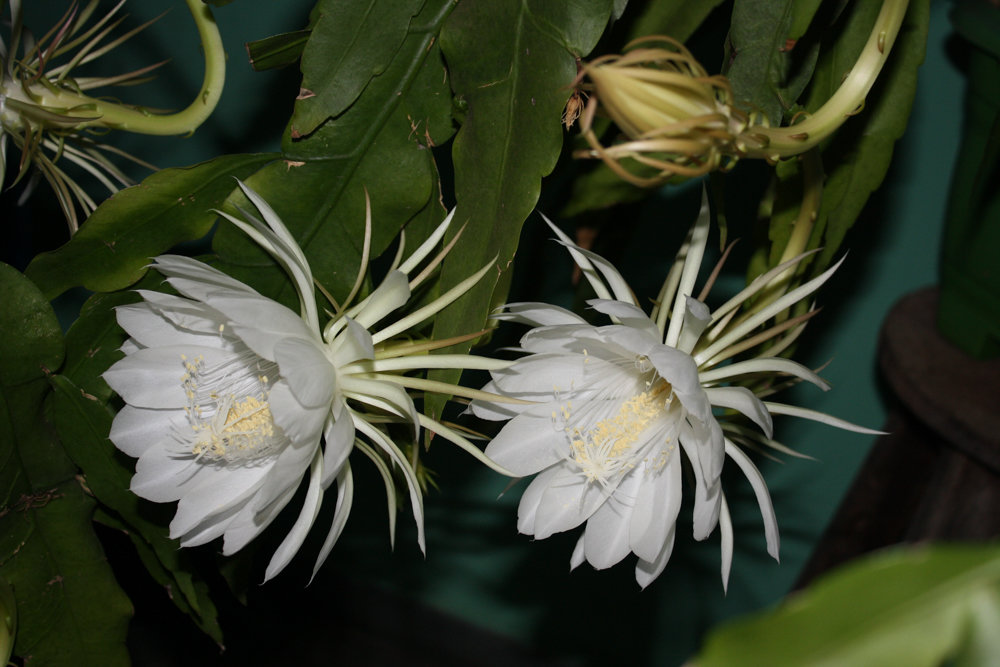 The Epiphyllum oxypetalum is a plant that has been made popular by the recent success of the book and film ‘Crazy Rich Asians.’
Courtesy of Leonardo Dasilva
By SURA JESELSOHN

Left to my own devices, I would prefer reading mysteries exclusively for entertainment. However, I discovered that there is a separate rack of both recently returned fiction and non-fiction at my local library.

Perusing the fiction rack allows me to see what is currently of popular interest, and could conceivably be of interest to me as well.

The other day, I saw a copy of “Crazy Rich Asians” was a movie hit from 2018. While probably not my favorite book, it was a quick and interesting read.

I would not be sharing this with you except that the book makes two interesting botanical references. One concerned a flower, the tan hua, the impending and short-lived bloom of which sets off an elegant party at Tyersall Park, the palatial home of the romantic male lead’s grandmother, Shang Su Yi.

Since I neither speak nor understand Chinese of any dialect — indeed have difficulty distinguishing the tones that are an integral part of Chinese languages — I thought it would be extremely hard to identify this plant by its Latin name. However, one should never underestimate the internet.

The scientific name is Epiphyllum oxypetalum, and it has a plethora of common names including Dutchman’s pipe cactus, queen of the night, and orchid cactus.

I was even able to find the meaning for the Chinese name. Apparently, tan hua yi xian is a metaphor meaning “short-lived” or “a flash in the pan,” and used to describe someone with an impressive but brief moment of glory, perhaps akin to our “15 minutes of fame.”

It also can carry the connotation of a showoff or someone whose achievement is the result of luck.

Considering the lushness of southeast Asian flora, it is ironic that Epiphyllum oxypetalum is native to the New World, more precisely to Mexico and parts of South America. It is a member of the cactaceae family, and the genus name Epiphyllum — literally “upon the leaf” — attests to its epiphytic nature, meaning that its roots do not grow in the soil in nature. Instead, the plant uses trees merely as support and derives it moisture and nutrients through its roots from ambient humidity and rainfall.

Oxypetalum, meaning “acute” petals, refers to the pointed tips of the 25 to 30 white petals.

If you would like to grow one yourself, living in a U.S. Department of Agriculture hardiness zone 10-11 would be helpful since its acceptable temperature range is 50 to 70 degrees Fahrenheit. Of course, it can be grown as a houseplant provided temperatures are kept constant.

While it can reach approximately six feet under these conditions, it can grow to 20 feet in the wild.

The story treasures the fleeting nature of the fragrant and attractive bloom. As night-bloomers, the E. oxypetalum opens between 8 and 10 p.m., reaches maximum between midnight and 3 a.m., and closes before dawn. Unfortunately, flowering is somewhat undependable, thereby adding anticipation and excitement to the event.

There is data claiming that blooming can be stimulated by moving the plant into an unheated location above 40 degrees for three weeks while maintaining normal filtered lighting. Blooming can then be expected three weeks after returning to normal higher temperature.

After the fertilized bloom falls off, a small red, ovaloid fruit develops containing black seeds heavily scattered throughout a white and viscous pulp. While this pulp is purportedly edible with a sweet taste, there is too little of it to command commercial interest.

Another common name for this plant is “night blooming cactus,” but common names can cause endless confusion. It turns out that this common name also refers to another cactus relative, Hylocereus undatus (pitahaya). In the 1990s, dragonfruit started appearing in fruit stores, and while I never thought to research its source, it showed up constantly as a dessert on a recent trip to Vietnam. When it turned out that both the dragonfruit plant and Epiphyllum oxypetalum were members of both the cactaceae family and subfamily cactoideae, threads started coming together.

The fruit of the Hylocereus undatus appears similar to that of the Epiphyllum oxypetalum, except it is larger and the flesh may be white, red or pink. It is native to southern Mexico and the Pacific coast of Central America, and was cultivated by the pre-Columbians.

The pitahaya, however, has a regular flowering season from June to October and it’s bloom time begins around 7 p.m., is completed around 10, and the flower wilts around 2 a.m., hopefully with moth pollination completed.

Temperature and light intensity can modify blooming times. On a warm and cloudy day, flowers may open as early as 4 p.m., while cooler temperatures can slow wilting to 10 a.m.

I think I’ll save the second botanical reference for next time!