Will your favorite food cart get an A? 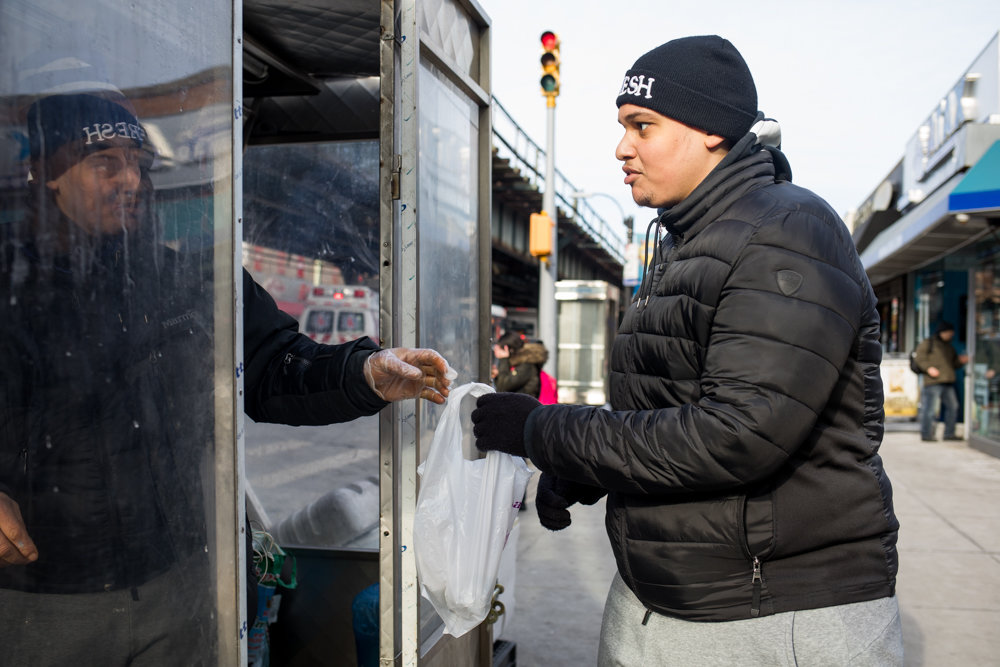 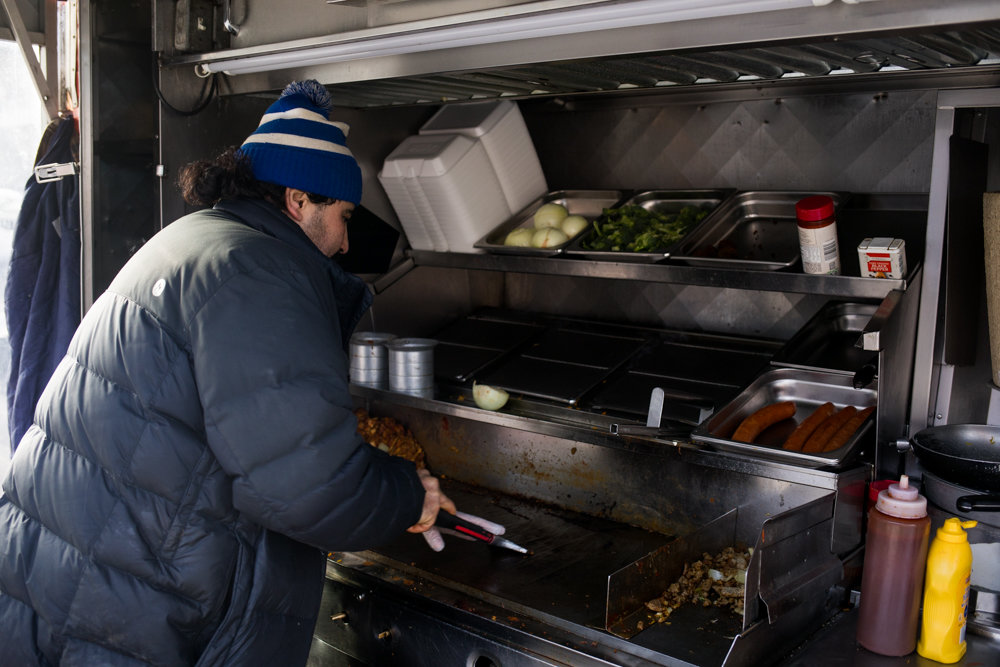 Rachid Tahzima cleans the grill in his food cart, Halal Brother, on Broadway just south of West 231st Street below the elevated 1 train tracks. A well-loved purveyor of gyros, hot dogs and more, Tahzima is in favor of the city health department’s effort to assign letter grades to food carts based on criteria like freshness of ingredients and how clean and organized the space and equipment are maintained.
JULIUS CONSTANTINE MOTAL 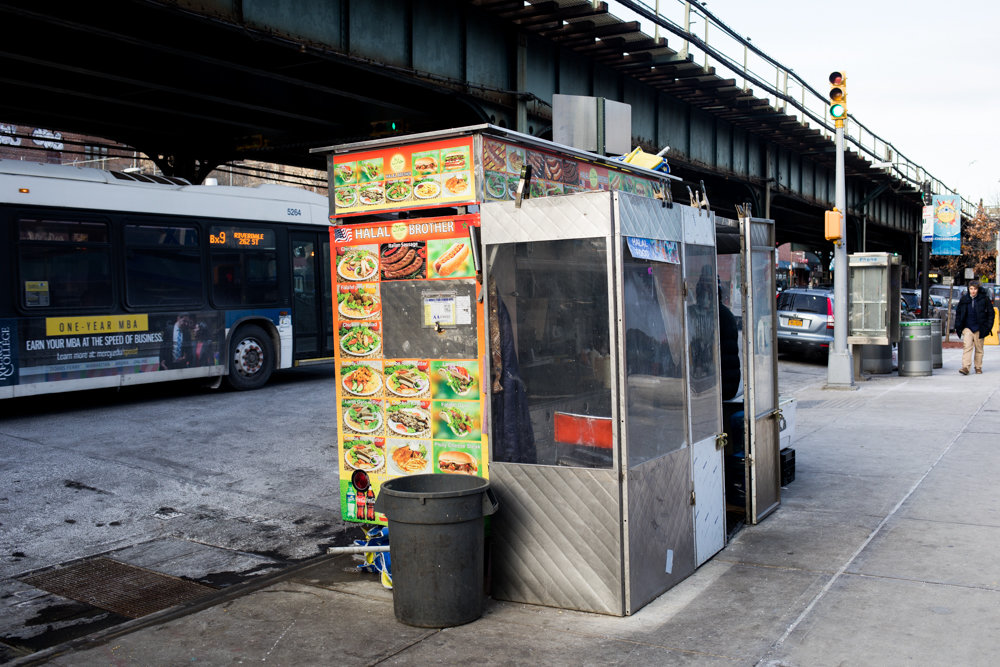 The Halal Brother food cart is a staple on Broadway just south of West 231st Street in Kingsbridge. Rachid Tahzima, who runs the cart, isn’t opposed to the city health department’s rollout of letter grades for food carts, which have been a fixture in restaurant windows for years. Tahzima’s customers know their halal guy runs a tight ship and anticipate an A.
JULIUS CONSTANTINE MOTAL 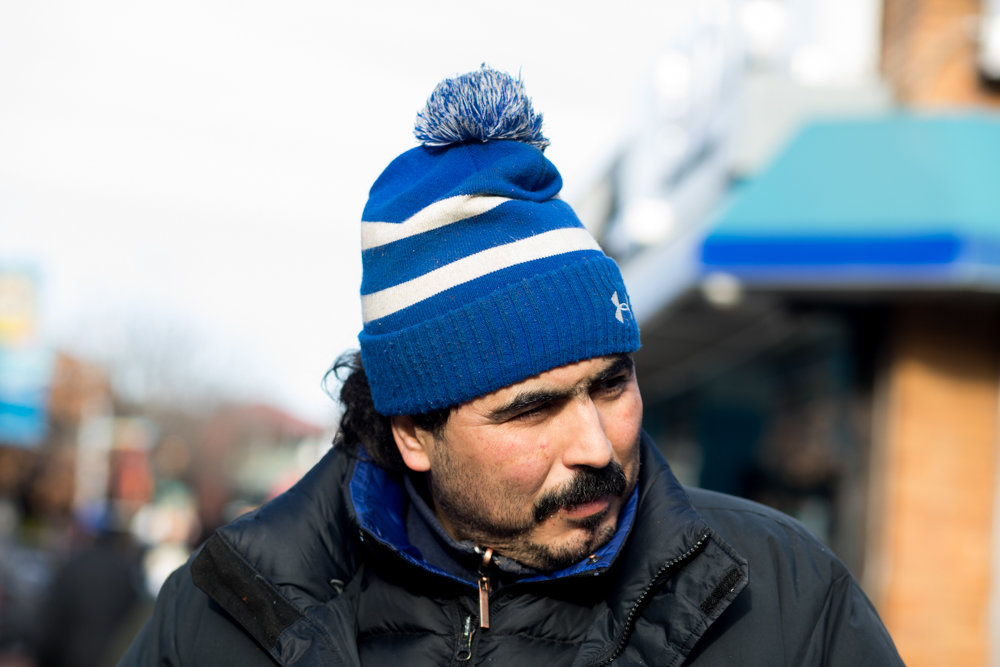 Rachid Tahzima talks about his experience working at food carts around the city, including in Manhattan, Brooklyn and the last couple years in Kingsbridge — and his belief letter grades for food carts are a good thing, just as restaurants have received them for years.
JULIUS CONSTANTINE MOTAL 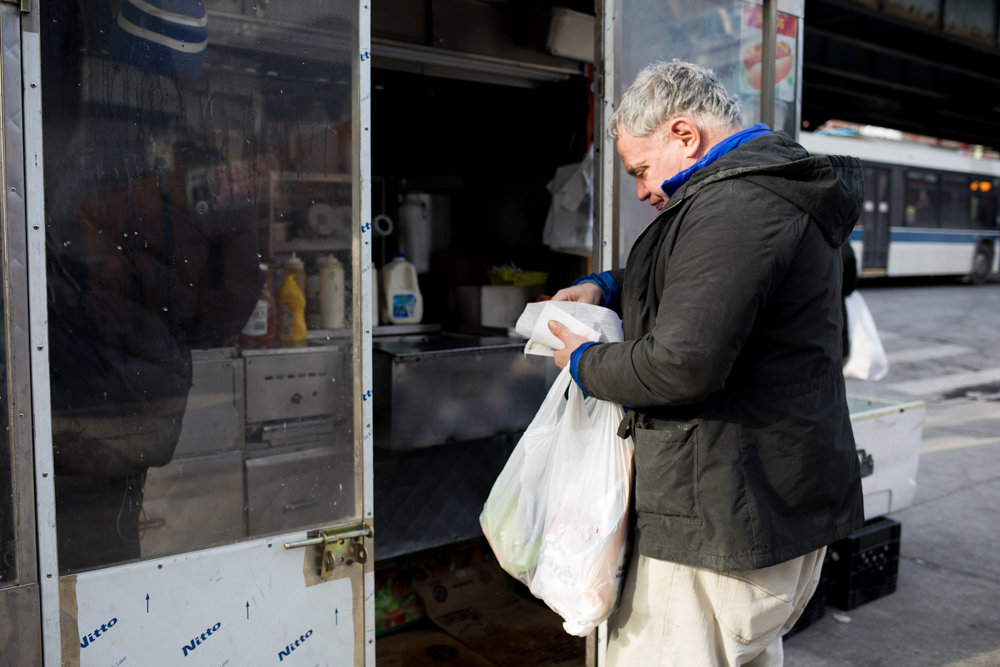 A customer waits for his second hot dog from the Halal Brother food cart on Broadway just south of West 231st Street. The city’s health department is now grading food carts based on cleanliness, organization, freshness of ingredients — as it has restaurants for years. While Rachid Tahzima, who runs the cart, has yet to receive his grade, he’s aiming for an A, keeping his cart pristine.
JULIUS CONSTANTINE MOTAL
Previous Next
City tracking, grading mobile food vendors

Violations found during inspections — for things like food not cooked to safe internal minimum temperature, a food worker or vendor spitting, or a food contact surface not properly washed, rinsed and sanitized — factor in grading based on how big a risk they pose to a consumer’s health.

Perhaps the most notable aspect of the new policy, however, is a location-sharing device the city’s health department is attaching to mobile food vendors’ vehicles to help inspectors find them, according to published reports. Whereas in the past the department used data analytics to track down vendors, now, as each vehicle renews its one- or two-year health department permit, the device will be installed, and the cart can then be graded.

Some vendor advocates, meanwhile, have raised concern regarding how these devices could potentially be misused, infringing on a vendor’s privacy.

But the health department deletes all location data from their internal database within 24 hours, spokesman Michael Lanza said. It also protects data during transmission and storage, and makes the location-sharing device identification number different from the unit’s permit, decal and license number.

And the department will seek out location information from a device only when its corresponding cart is due for inspection.

Savory smells of sizzling onions and marinated meat waft from Rachid Tahzima’s oil-slicked grill inside his Halal Brother cart, parked on a noisy strip of Broadway under the elevated 1 train tracks near West 231st Street.

Many might think food carts like the Morocco native’s isn’t kept to the same standards as, say, Malecon Restaurant nearby. But that’s not the case for Tahzima, who is diligent about keeping his cart sanitized and sparkling. And when the city’s health department finally shows up to give his cart its first-ever letter grade, Tahzima knows he’ll shine.

Mobile food carts like Halal Brother are now receiving the letter grades the same way restaurants have since 2010. While some owners have griped about grading fairness and getting fined for violations, they’ve more or less come to terms with the practice, with now more than 90 percent of the city’s 24,000 restaurants earning an A based on cleanliness, food preparation, and other factors that could affect a customer’s health.

Until now, the city’s more than 5,000 food carts and trucks have been inspected, but not graded. But last month, the health department dished out the first couple dozen or so grades in Manhattan, Brooklyn and Queens — mostly A’s.

Inspectors examine ingredients for freshness while ensuring work equipment and surfaces are organized and immaculate. Even if vendors are cited for minor violations — like improperly maintained flooring or improper storage of ice-handling materials — that may not necessarily stop them from receiving an A.

The health department announced last November it would start grading carts and trucks, while also attaching location-sharing devices to the vehicles to help inspectors find them, according to reports. The measure follows passage of a bill sponsored by Forest Hills councilwoman Karen Koslowitz last summer. Food carts and trucks are to be evaluated on the same criteria as restaurants, by the same health inspectors, subject to the same schedule of fines, with violations and grades posted on the city’s OpenData website.

The department aims to grade all mobile vendors within the next two years, with four inspectors added to a more than 100-strong staff in an attempt to expedite the effort.

Vendors — and restaurateurs — who receive less than an A grade can take another stab at addressing problems before a re-inspection. Meanwhile, the health department reportedly no longer fines businesses with top grades for minor violations.

Tahzima’s customers, meanwhile, seem to agree grades for food carts is a good thing. On a recent cold afternoon, Jeremy Serrano of Marble Hill stopped by Halal Brother for a hot sausage on grilled pita.

“That should be good,” Serrano said of Tahzima’s cart getting graded, “so we could know how service is going, how sanitized he keeps his cart, how he keeps his food.” Yet Serrano already predicts the outcome — Tahzima “deserves an A.”

Norwood resident Mike Williams makes a point of filling up on Tahzima’s food just about every time he finds himself in Kingsbridge craving chicken over rice. Now that Tahzima’s cart — along with thousands of others — are set to get letter grades, it could reassure regulars like Williams their food is safe to relish.

Not that he was concerned in the first place.

“It’s a good idea,” Williams said. “Just holds them to the same standards as a restaurant. They should have to at least, for the safety of the public, be inspected just like anybody else.”

Yet, while navigating government regulation can be tough for just about any eatery, mobile food vendors face “unique challenges,” said Matthew Shapiro, legal director of the Street Vendor Project at the Urban Justice Center, an advocacy group for vendors.

“They have to basically bring everything they need to set up every day,” like running hot and cold water, which most are required to have, Shapiro said. While a bricks-and-mortar restaurant relies on a building’s water supply, vendors must lug hot and cold water tanks from their commissary daily.

That can pose problems in winter when tanks freeze as temperatures plummet, Shapiro said, preventing water from running properly and even risking a violation for the vendor.

But it’s also particularly tough for vendors because they’re not granted some of the allowances restaurants enjoy — like when it comes to maintaining food at established safe temperatures to prevent the start of food-borne illnesses. Restaurants, Shapiro said, are basically given a bit more leeway.

“Vendors had already been subject to the same rules,” he said, “but they don’t get the benefit of having that A grade to show off to the public that their cart is just as sanitary and safe as a restaurant would be.”

And Tahzima — who’s been selling food from his spot south of West 231st around two years — is confident that when inspectors make their way to his cart, they’ll reward his cleanliness. At the same time, he admits he’s a bit worn down after more than a decade feeding hungry mouths prowling city streets.

He’d like to one day join his cousin in Minnesota working at his Middle Eastern restaurant. But in the meantime, he’s gearing up for his next inspection.

“It’s good,” Tahzima said of expecting a grade soon. “You have to be clean, everything good.” And given his diligence — gloves on hand, soap, paper towels, hot and cold water, ice, keeping food sufficiently hot, he’s gunning for an A.

“I hope so,” Tahzima said. “I need the customers.”