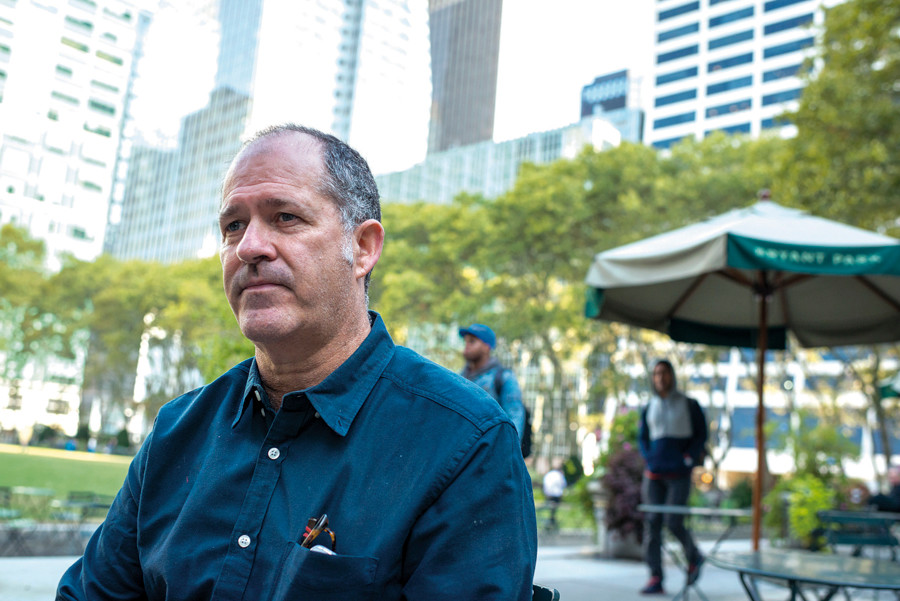 Author Amos Kamil, who has a new book out on the Horace Mann sexual abuse scandal, during an interview in Bryant Park on Oct. 8.
Adrian Fussell / The Riverdale Press
By Isabel Angell

Over three years ago, writer Amos Kamil had just received the official assignment for his now-famous story in The New York Times Magazine called “Prep School Predators,” which uncovered years of sexual abuse by teachers at his alma mater, the Horace Mann School.

In his new book on the subject, “Great Is the Truth: Scandal, Secrecy, and the Search for Justice at Horace Mann,” Mr. Kamil recalled a moment from that period:

“The day I received the magazine assignment, Ariel Kaminer, who’d become my editor, walked me out of the Times building. We paused at the subway entrance before she descended to catch her train.
‘You’re brave to take this on,’ she said.

‘Or just stupid,’ I replied. ‘I’m about to get slammed by some serious negativity.’

‘That’s not what I meant,’ she said. ‘I’m not sure you’re prepared for the tsunami that will ensue when you publish. Everyone who has been abused — not just at Horace Mann — is going to seek you out to tell their story, too.’”

Sitting in Bryant Park on Oct. 8, Mr. Kamil thought back to that moment with his editor, which happened at a subway stop nearby. At the time, he had never attempted to write a piece of investigative reporting: he was a screenwriter, playwright and brand strategist. The piece published on June 6, 2012, and Mr. Kamil’s life has never been the same since.

“Within the Horace Mann community, hundreds of stories poured forth. But what has surprised me, I’ve gotten calls from Germany, Israel, Vermont… Boston, DC, Alaska, from the highest levels of society to the lowest levels of society,” he said, explaining they have all come from people who want to him to tell stories of abuse. The call from Boston had come just the day before.